NOTE: This story has been updated since it was first published.

The third season of Married at First Sight hasn’t even finished airing yet, but the production company behind the show is already working on Season 4 (which, as The Ashley recently told you, will apparently be set in Miami). However, two of the show’s experts have just announced that they won’t be helping match singles in the Sunshine State.

Dr. Joseph Cilona, the show’s psychologist, and sexologist  Dr. Logan Levkoff both announced this week that they are leaving ‘Married at First Sight.’

Dr. Cilona, who has been one of the four ‘MAFS’ experts since the first season, used his social media accounts to break the news of his departure. In a note, he expressed gratitude to the show’s fans.

My heartfelt and sincere thanks to all the amazing ‪#‎MarriedAtFirstSight‬fans for your viewership and sharing all of your thoughts and feelings over the past three seasons. MAFS has been a truly amazing journey in so many ways, and I feel grateful to have been a part of it for these past three seasons. A special thanks to ALL of our brave couples who put their lives and hearts in our hands.

And now, I’ve decided to say goodbye to MAFS, and pass the baton with deepest well wishes to everyone who joins the MAFS journey in the future.

With love and deep gratitude to you all.
XOXO
Dr. Joseph

Dr. Levkoff confirmed on Sunday that the rumors of her leaving the show were true. She posted a message to her social media accounts to thank the show’s viewers and participants. 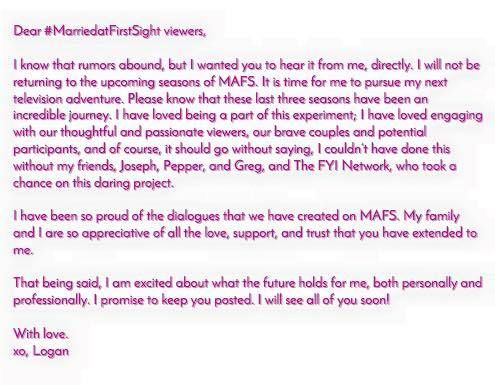 While the experts may be changing, the show seems to be going strong. Dr. Levkoff confirmed on her Facebook page that Season 4 is already in production, and it was recently announced that casting was being done in Chicago in addition to Miami. (The Ashley cannot confirm if the Chicago castings are being done in addition to the ones in Miami for Season 4, or if Season 5 will take place in the Chicago area.)

The show’s other two experts– sociologist Dr. Pepper Schwartz and spiritual adviser Greg Epstein— have not yet revealed if they will remain on the show for Season 4.