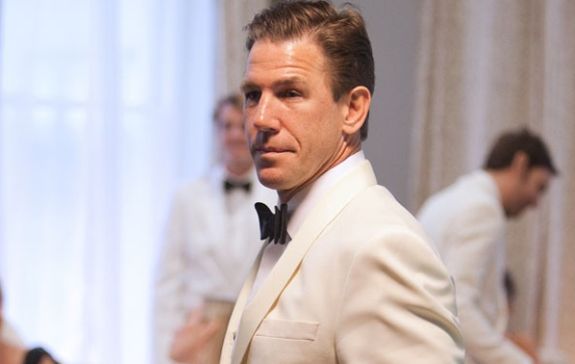 An allegation of sexual assault involving Thomas Ravenel of Bravo’s Southern Charm has the show’s production company conducting an investigation to get to the bottom of the reality star’s latest scandal.

“Haymaker, the production company for ‘Southern Charm,’ and Bravo take allegations like these very seriously,” Bravo said in a statement to People magazine earlier this week. “Haymaker is conducting an investigation, and once all the information is gathered and carefully reviewed, appropriate action will be taken.”

The allegations against Thomas came from a woman he reportedly met on Tinder in 2015. The woman’s daughter, Ashley Perkins, detailed the incident involving her mother, Debbie Holloway, to People magazine. (According to Ashley, Debbie was unable to talk to the magazine herself because she had signed a non-disclosure agreement.)

A sexual assault complaint was filed against Thomas with the Charleston Police Department on Monday. Charleston City Paper reports that the incident report lists the offense as a “sex offense/forcible rape.”

Ashley explained that her mother had agreed to go on a date with Thomas in December of 2015 and upon picking Debbie up for their date, Thomas suggested they stop by his newly renovated home, which Debbie agreed to.

What do you mean tomorrow’s Monday?! Hope you all have a fabulous week! ??????

Following a tour of the main house, the pair poured some wine before allegedly heading to Thomas’ guest house (which fans of the show know to be where Thomas’ nanny lives along with his children, four-year-old Kensie and two-year-old Saint. Thomas shares the kids with fellow ‘Southern Charm’ star Kathryn Dennis).

Ashley went on to say that, once Thomas and Debbie entered the nanny’s room, Debbie told her daughter that Thomas started pointing out of a window to a spot where he had previously seen Kathryn “making out with some guy.” According to what Debbie told Ashley, Thomas then “went into this trance.”

“That’s when he turned on her. He pushes my mom onto the nanny’s bed, grabs her wrist with one hand, then he starts trying to pull her pants off,” Ashley told People. “And she’s like ‘No, no, no, stop.’ He stuck his fingers inside of her vagina as well as her anus. She told me that he held her hands back with one arm and then pulled his penis out and shoved it in her face.”

Ashley claims her mom then screamed at Thomas, calling him a rapist, which ultimately led him to jump off of her and break out of the trance-like state he was in. Following the attack, Thomas allegedly told Debbie “to get yourself an Uber.”

“My mom has never been in an Uber. She’s angry at this point. I was angry at her for doing this but she told him, ‘No you can drive me home.’ He did say to her on the car ride home, ‘You’re stupid to let me drive you home when I’m intoxicated.’ He admitted it,” Ashley claims. “And on the way home, he went off on her about how she wasn’t his type, he just asked her out to, pardon, but f**k her. He brought up how she was old.”

“Her wrists were starting to look bad the next morning. I said, ‘We need to see who we’re dealing with.’ She didn’t want to do anything. She was scared to go to court. I said right now you don’t want to do anything, let me take a picture of your wrist. Let’s get some evidence in case you want to do something,” Ashley said.

Ashley said Debbie then contacted a lawyer friend of hers who advised she get an attorney to handle the situation. Debbie ultimately contacted attorney Gloria Allred, who reportedly took on her case on June 1, 2016. Ashley says that she and Debbie participated in mediation via video chat.

“We met at Belmont Charleston Place Hotel in her suite,” Ashley said. “Thomas wanted to do this in New York City. My mom was terrified of being in the same room as him. She didn’t want to fly. She has anxiety because of him. So Thomas was in New York with Gloria, her partner and Thomas’ attorney Richard Terbrusch. The whole mediation was done via something like Skype. I was there the whole time and heard every detail.”

In a statement to People, Thomas’ attorney seemingly denied Debbie’s allegations and also questioned her motives.

“My client enjoys a certain degree of fame and unfortunately has become — unfairly — a target for an individual who has, in my opinion, dubious motivations,” Richard said.

In a statement to Fits News, which was the first site to report the allegations, Thomas’ attorney made it clear that Thomas is fighting Debbie’s claims.

“One can only speculate on her motives, but rest assured once the instant rush of social media wears off and the potential of very real legal consequences sets in, such rashness will be regretted,” he said.

Ashley said they ended up settling for $200,000. Since the alleged assault, Ashley and Debbie have left South Carolina and now reside in Florida. In her own interview with Fits News, Ashley addressed Thomas’ attorney’s threats against her.

“If Thomas wants to pursue legal action against me, I am ready for it,” she said. “The truth will stand when the world is on fire, right!  I would love for the world to hear every nasty detail of the night Thomas Ravenel tortured my mother and scarred her for life. If my mom’s story was so lacking in the first place, why would you settle for six figures? I sure wouldn’t!

“In my opinion, Thomas Ravenel is guilty and this is why he settled,” she added.

As for why Ashley did not sign a non-disclosure agreement as her mother did following the mediation, she said “someone dropped the ball.”

My mom has NOTHING to do with this. She signed an NDA – I did not. 3 years later I am SICK of seeing the way he defames women & I felt a need to reach out & hopefully bring something good out of something AWFUL. I find it shameful the way your views are so backwards

Ashley said she’s sharing her mother’s story in an effort to help other women in similar situations.

“I would like for my mom not to have to worry about flipping on the television and seeing his smug mug, flaunting his lifestyle around,” she added. “It’s bigger than us now. I’d like to see some good come out of this ugly.”

Thomas’ latest allegations are not the first legal woes he has faced. While serving as the State Treasurer of South Carolina in 2007, he was indicted on federal cocaine distribution charges. Thomas resigned from his seat in July of 2007 and was sentenced in March of 2008 to 10 months in federal prison.