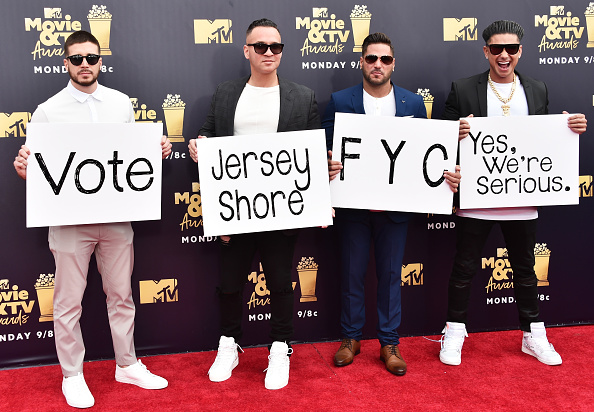 The reality TV stars came out in droves on Saturday, walking the red carpet and attending the 2018 MTV Movie & TV Awards. (After all, they’re reality stars: there’s nothing they love more than attention!)

This year, the boys of Jersey Shore Family Vacation were the stars of the red carpet, posing together and showing off their fancy threads. They also carried signs asking that their show be considered for the Emmys’ reality TV categories.

(Oh, and Deena Cortese was there too. Nicole “Snooki” Polizzi and Jenni “Jwoww” Farley were absent because they decided to use the filming break to go back home to be with their families in New Jersey.)

This year’s carpet was surprisingly void of any Teen Mom franchise stars. In the past, girls and guys from both shows have make the trek to Los Angeles to attend the show. This year, however, only fired cast member Farrah Abraham and her daughter Sophia attended. (Farrah is, of course, fresh out of the slammer.) This year, Farrah chose to wear pants so on-lookers didn’t have to worry about her flashing her infamous crotch to the crowd like she did at an event last month.

Teen Mom OG dad Gary Shirley also attended the show, but it doesn’t appear that he walked the red carpet.

The cast of MTV’s Floribama Shore was eager to eat up their 15 minutes of fame. The entire ‘Floribama’ crew was present, smiling and posing together on the red carpet.

The cast of Vanderpump Rules also made an appearance. Newly engaged Jax Taylor and Brittany Cartwright made sure everyone knew how in love they were. (Brittany, of course, flashed her gigantic rock whenever possible!)

Various other MTV reality stars also strutted their stuff on the red carpet. Check out all the red carpet pics from Saturday’s show!

Justina Valentine (‘Wild ‘N Out’ & ‘The Challenge: Champs vs. Stars’)