Audrina Patridge has not even started filming The Hills: New Beginnings yet, but the MTV spin-off show is already causing her problems.

Audrina has already confirmed that she will be appearing on ‘The Hills’ spin-off, but if her ex-husband Corey Bohan has any say in the matter, she won’t be filming any scenes with their two-year-old daughter Kirra. The pro BMX rider took to Instagram last week to voice his concerns on the idea of Kirra—- or any child—- appearing on reality TV.

“I refuse to think it’s ok for our 2yr old daughter Kirra Bohan to be shown & exploited on reality TV. Not just my child but anyone’s for that matter,” Corey wrote in a post to his private Instagram account. “I stand up for what I believe in. This post isn’t an attack or negative rant. This is about our daughter Kirra Bohan.” 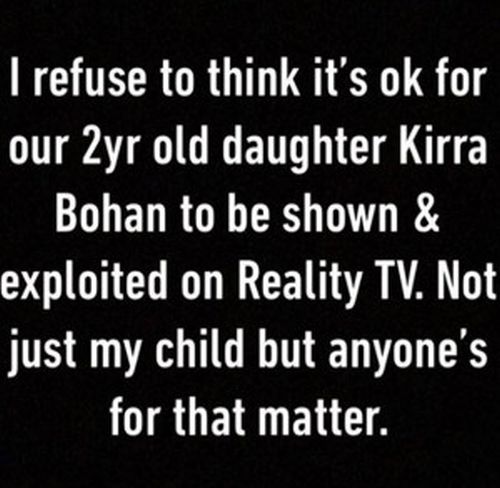 While Corey’s Instagram account is now set to private, his post was verified by People. A source for the magazine stated that Corey’s dig was unnecessary.

“They haven’t even started filming the show yet,” the magazine’s source said. “Audrina hasn’t made any final decisions about whether Kirra will appear.”

The source went on to say that Audrina is stressed about the ongoing drama with Corey and “just wants things to be okay.”

Audrina and Corey divorced in 2017 after less than a year of marriage and, as The Ashley reported in September of last year, Audrina filed for and received a temporary restraining order against Corey after she filed for divorce.

According to court documents, Audrina accused Corey of putting her through a series of emotionally and physically abusive episodes. She also claimed he showed up at an event she was working and followed her on stage, vowing to go get Kirra.

Audrina currently has full custody of Kirra, while Corey maintains visitation rights—- something Audrina requested he be stripped of earlier this year after she claims he allegedly displayed “angry, rude and emotionally abusive” behavior toward Kirra, while also keeping tabs on Audrina’s whereabouts.

“I am more afraid of him now than ever and fear for the safety of our daughter Kirra when she is in his care,” Audrina claimed in court doc filed in March, which were obtained by The Blast.

“It’s been a really emotional and difficult time for Audrina,” a source said. “But Kirra is her top priority and she’s trying to focus on the positive.”

When MTV announced ‘The Hills: New Beginnings’ earlier this month during the VMA’s, the network stated in a press release that the spin-off will “reunite original cast members, alongside their children and friends, and follow their personal and professional lives while living in Los Angeles.”

Audrina is just one of many cast members who have become parents since ‘The Hills’ ended in July 2010. Heidi Montag and Spencer Pratt are parents to 10-month-old son Gunner, while Whitney Port has a one-year-old son named Sonny. Jason Wahler is also a parent; he and his wife Ashley welcomed daughter Delilah last year.

‘The Hills: New Beginnings’ is slated to debut on MTV next year.