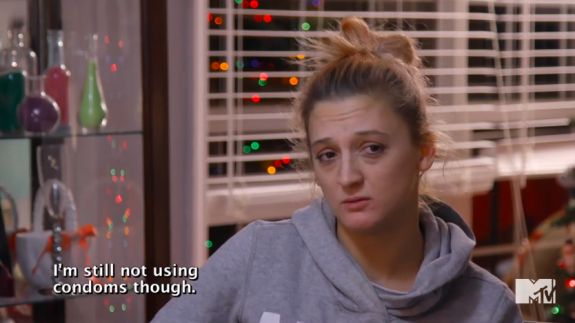 From making babies to making weird websites, the stars (and former stars) of the Teen Mom franchise have been busy this week! In an effort to bring you up-to-date on all of the latest Teen Mom OG and Teen Mom 2 news, The Ashley brings you the Teen Mom News Pile.

Earlier this year, Amber Baltierra— sister of Tyler— introduced ‘Teen Mom OG’ fans to her boo Billy, whom, in The Ashley’s opinion, may take the prize for being the greatest person ever featured on a ‘Teen Mom’ show.

Billy, as fans may remember, was Amber’s fresh-from-the-slammer fiance who appeared on several episodes last season. He is best-remembered, of course, for the required-by-law tethering device he was forced to carry around with him. For some reason, his court-mandated ankle bracelet had a legit leash so his movements inside the house were limited to places that had outlets he could plug himself into. (You can’t make this stuff up.)

It’s been a while since fans have had ol’ Billy grace their TV sets. Recently, however, a fan asked Amber via Instagram if she was still planning to marry and procreate with Billy. Amber’s response regarding whatever happened to Billy managed to surpass his on-the-leash adventures in terms of trashiness!

Amber– who went to rehab and recently celebrated six months of sobriety— said that Billy is no longer her boyfriend.

“I went to treatment and he couldn’t handle being alone, so he started banging my cousin and she got pregnant,” Amber wrote.

If you’d like to relive the Adventures of Billy via The Ashley’s recap of the episode Billy was on, click here!

Bristol’s Baby Daddy is Going to Be a Daddy…Again

Bristol’s first baby daddy is about to have his fourth kid with his second baby mama!

Over the weekend, Sunny Johnston— the wife of Bristol’s baby daddy Levi Johnston– announced she’s pregnant. This will be the fourth child for Levi, who is the father of Bristol’s son Tripp. (He and Sunny have daughters Breeze and Indy together.)

“We are excited to say a little present is on the way. Baby Johnston #4 due in July!” Sunny captioned a family photo posted to Instagram showing the whole family wearing matching red pajamas.

In the comment section of the post, Sunny stated that they won’t find out the sex of the baby for another two months.

When one follower suggested to Sunny that she and Levi get their own show on MTV, Sunny said that wouldn’t be a good idea.

“Haha we wouldn’t be any entertainment for MTV style,” she wrote. “Because if we had our own show we wouldn’t include the only tiny part of our life with any drama. Which is the whole idea of the show we’re currently on haha but thank you so much! Thankful for the people who think for themselves and not just believe whatever they hear.”

David Eason Complains About Baby Mama No. 2, “Random” Website Pops Up to Trash Her

Had to go to the daycare just to see my son for his birthday. It’s a shame his mother is keeping him from me again for no reason. I’m used to the lies and false accusations at this point. It’s just sickening that my son has to go through this and deal with her bullshit.

David has been battling to see his middle child, son Kaden, over the course of this year. In February, Kaden’s mom Olivia Leedham filed emergency court papers in an attempt to keep the boy away from David and “The Land,” but dropped the case a month later. Throughout the summer, Kaden was frequently seen in photos posted to social media by Jenelle and David, but it looks like things have gone sour between David and his second baby mama.

On Friday, David posted a photo to Instagram showing him visiting Kaden. The photo was accompanied by a disgruntled caption.

“Had to go to the daycare just to see my son for his birthday,” David wrote. “It’s a shame his mother is keeping him from me again for no reason. I’m used to the lies and false accusations at this point. It’s just sickening that my son has to go through this and deal with her bulls**t.”

In the comment section of the post, David wrote that he posted the pic and caption so that his son will someday see it.

“He will be mad at his mom when he reads the disgusting lies she said about me,” David wrote. “Not only has she been doing this to me for years but she tried to have me put in prison for no reason twice! Ppl like HER deserve to go to prison…She has always been constantly throwing lies at me.”

From your first time trick or treating in Disney, first time eating an oyster, and your first rollercoaster… hope to have more memories soon! Made so many memories already. We love you and miss you! #HappyBirthday ????

As The Ashley previously reported, David’s relationship with his son has been strained since the boy’s birth. Olivia obtained sole legal and physical custody of Kaden after David was for arrested committing domestic violence against Olivia while she was pregnant with their son. (He was later acquitted.)

In February 2017, though, Olivia had a change of heart and allowed David to see his son occasionally unsupervised. A year later, she filed the emergency papers to have David’s unsupervised visits with Kaden suspended for various reasons.

Anyway, last week a mysterious website appeared online, featuring only one story that praised David and claimed that Olivia had a drinking problem and committed domestic violence against David during their relationship. (The Ashley has left the text intact to preserve the fantastic writing!)

“Once they started dating David and his friends got more aware of a huge problem she possessed, drinking alcohol,” the site alleges. “Before David’s son was born, the source reveals, Olivia would consume as much as an entire liquor bottle to herself… The source also told us that David would go sometimes with Olivia to her AA meetings, because if he didn’t she would turn violent on him.”

(The Ashley refuses to link the site because her sources tell her that Jenelle and David are behind it.)

TheMicDrop.net now has a second story on it that is, of course, about David as well.

The site is full of fun cliches, grammatical errors that sound straight off The Land, and pips such as these:

“Even though David Eason gets a bad rap most of the time, I think there is a lot to him the public doesn’t know. I do not think we can truly begin to understand someone until we get to know them, their lives, and their issues personally. Should we give David Eason another chance? Has he had rough life?”

“David has a past of his own and fans often believe it’s all bad. Personal friends and family have spoken out recently about this claiming he had the nickname of “Honest Abe” in high school and was always a helping hand.”

The Ashley will have more on the custody situation soon. Stay tuned!