Just a few days after Paola Mayfield hinted on Twitter that things with her husband Russ were less-than-stellar, her manager has confirmed that the 90 Day Fiance stars are putting their marriage on hold. Following the confirmation, Paola continued to shade her hubby on social media.

According to Paola’s manager Dominique Enchinton, Russ and Paola are “on a break” and are not seeking a divorce…yet. Dominique stated that the couple’s decision to move into an RV with their son Axel contributed to the strain in their marriage.

“During this pandemic, it’s hit everyone very hard, especially couples who have had to stay indoors with each other 24/7,” she told In Touch Weekly on Friday. “…It’s definitely taken a toll on both of them being in each other’s faces, so they are going to be taking a break for a little bit.”

To add to the stress, Russ was apparently laid off from his job due to the pandemic.

“Paola was the sole breadwinner for the past year,” Dominique said of Paola, who works as a fitness coach and pro wrestler.

Earlier this week, Paola made sure her social media followers knew that something was wrong in her marriage. On Wednesday, she tweeted that, “Part of the reason why relationships end is that we get caught up in other things, forget to appreciate one another, and sadly, marriage isn’t a priority anymore.”

Part of the reason why relationships end is that we get caught up in other things, forget to appreciate one another, and sadly, marriage isn't a priority anymore.

“People asked me why I don’t take pictures with my husband, and my answer is… I just don’t like to pretend #youareguessingright,” she wrote, obviously addressing the followers on Instagram who have asked her why she hasn’t posted a pic of Russ since July 6.

People asked me why I don't take pictures with my husband, and my answer is… I just don't like to pretend 🤷🏼‍♀️#youareguessingright

Despite Paola’s hinting that she and Russ have split, her manager insists that they are trying to save their marriage.

“They are not getting a divorce yet,” the manager told In Touch Weekly. “They are still together. They are just taking a break and going to therapy to work through the issues.”

Paola continued to throw shade at Russ via social media, though. On Saturday, when someone tweeted to her that she’s planning to “throw [Russ] away and collect child support” for Axel, Paola clapped back.

Russ and Paola starred on the first season of “90 Day Fiance” back in 2014. Paola, who is originally from Colombia, married Russ in October 2013. The couple welcomed their son Axel in January 2019. They have appeared on multiple “90 Day Fiance” spin-offs in the years since their debut.

Paola’s manager also addressed nay-sayer’s claims that Paola was done with Russ now that she has her green card.

“One thing we do want to address is that Paola has been getting a lot of backlash from people on her social media, and that’s something we don’t appreciate,” her manager told the magazine. “A lot of people are saying that she was in it for the green card, but Paola has had her green card for over five years already so that’s not true.”

“When people tell me to move back to my country (typical)…The United States is my country now. #uscitizen #iknowmytrue,” she wrote.

Paola’s manager told In Touch Weekly that things between Paola and Russ are amicable.

“They love each other very much and have nothing bad to say about one another; they respect each other,” she said. “A lot of couples have gone through this. There is no animosity or anything like that.”

Russ has yet to really speak out on the “break” he and Paola are on. However, on Sunday, he showed his followers that he was leaving Florida, which is where he and his family have been living.

“Peace out Florida!” he captioned a photo of a plane taking off. 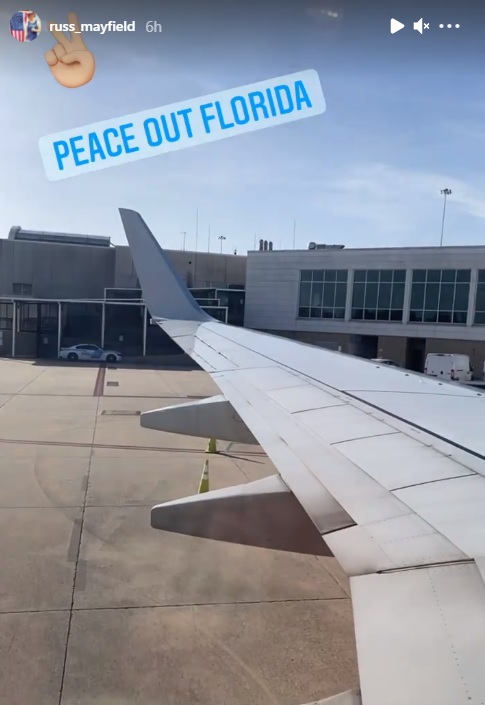