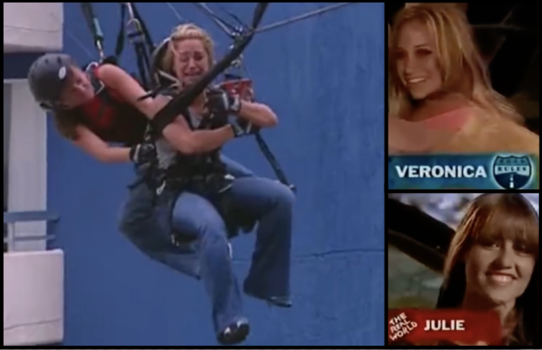 Nearly two decades ago, Julie Stoffer seemingly attempted to unhook Veronica Portillo’s safety harness as the two competed against each other on The Challenge Inferno. Despite the incident earning her the nickname “Murdering Mormon,” Julie says she’d like to have the opportunity to go on ‘The Challenge’ again– possibly with Veronica.

In a new interview with Us Weekly to promote the just-released Real World Homecoming: New Orleans, Julie addressed the incident, which remains one of the most-memorable moments in ‘Challenge’ history.

For those of you who don’t remember the Season 8 moment, Julie and Veronica faced off on ‘Inferno’ in a zip-lining challenge where Julie–trying to get past Veronica– pulled violently on Veronica’s safety harness as the two were hanging in the air.

Despite the panic exhibited by Veronica, (as well as cast members on the ground, watching the incident unfold) Julie didn’t let go of the harness until she heard the air horn, signaling the end of the challenge.

“I’ve got a Mormon killer on my hands,” Veronica said at the time of the incident, referring to Julie’s (then) Mormon faith. (For the record, iit was determined that Julie had caused no real danger to Veronica, according to Us Weekly.)

Julie told the magazine that she and Veronica haven’t appeared on a ‘Challenge’ together or spoken to each other since 2005, but that she’d really like to reconnect.

“She’s one of the people that I would really like to have the opportunity to reconnect with or go on another ‘Challenge’ with,” Julie said.

As for the harness incident, Julie claims she didn’t know at the time that it was becoming “such an iconic moment” on ‘The Challenge.’

“ … but then years later, I would keep hearing about it, keep seeing it,” she said. “They would call me the ‘murdering Mormon’ for a lot of years.”

As fans of ‘The Real World: New Orleans’ may remember, Julie often spoke about being a Mormon. However, she is no longer a member of the church today. While living in ‘The Real World’ house, Julie was suspended from her college– Brigham Young University– for violating the school’s honor code, which stated that unmarried students could not have roommates of the opposite sex that were non-family members.

Once she left BYU, Julie said she sought out to be “that good Mormon girl,” but after researching more about the religion, she felt it wasn’t completely compatible with her own beliefs. Julie said her exit from the church will be addressed more on ‘The Real World Homecoming.’

“There’s gonna be attention paid to my faith transitions over the years, and kind of, like, what my religious life looks like now,” Julie said. “It’s a little complex, so I’ll just say that it’s not an uninteresting story.”

As for the possibility of making a ‘Challenge’ comeback, Julie revealed she would’ve preferred that over ‘Homecoming,’ and even asked MTV if she could do ‘The Challenge’ instead.

“I just would love the opportunity to go on another one after all these years,” she said. “I did a fair number of them in my younger years. That was a huge part of my life.”

During her five-season Challenge’ career, Julie was part of the winning team on the Real World/Road Rules Extreme Challenge. She was also a finalist on The Challenge: Gauntlet 2.

Watch the infamous harness incident between Julie and Veronica below.