The Challenge/Real World, Worst Cooks In America
March 23, 2022 by Chelsea
15

A group of cooking-challenged 1990s celebrities will head to the kitchen to serve up nostalgia and nearly-edible food in the upcoming season of Worst Cooks in America Celebrity Edition: That’s So ‘90s.

Premiering next month, People reports, ‘Worst Cooks in America Celebrity Edition: That’s So ‘90s’ will follow hosts Anne Burrell and Food Network star Jeff Mauro as they attempt to turn the ‘90s television stars into better cooks, with the winner taking home $25,000 for the charity of their choice.

The cast will include stars from 1990s TV hits such as All That, Full House and California Dreams, as well as Mark Long, who got his start on the original season of Road Rules in 1995 and continues to appear on MTV’s The Challenge spin-offs.

“While these recruits were Hollywood darlings on television in the ‘90s, they never won anyone over with their cooking–- so Anne and Jeff guide them through a series of rigorous challenges to improve their culinary game,” the show’s press release reads. “From a short-order diner relay to superhero-themed obstacle course, the challenges are wilder and more outrageous than ever.” 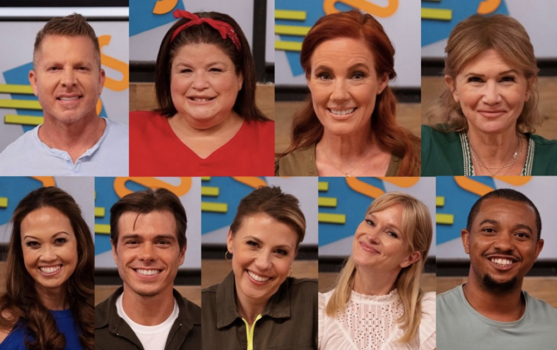 The cast includes (from top left):

Mark Long of ‘Road Rules’ and ‘The Challenge’

Lori Beth Denberg of ‘All That’

Nicholle Tom of ‘The Nanny’

Curtis Williams of “The Parent ‘Hood”

Network president Courtney White called the ‘90s cast “so much fun,” noting that most of the group “have never spent this much time in the kitchen.”

“The season is a nostalgia-filled blast with familiar faces, hilarious challenges and some impressive culinary transformations,” she added.

On Sunday, Anne shared her excitement about the upcoming season on social media.

“I am THRILLED to announce that the next season of #worstcooks ‘Celebrity Edition’ will be premiering on Sunday April 24th at 9 pm on @foodnetwork !!!” Anne wrote. “I am paired up with my GREAT friend @jeffmauro to take this hilarious and super fun group of celebrities through boot camp!!!”

‘Worst Cooks in America Celebrity Edition: That’s So ‘90s’ premieres Sunday, April 24 at 9 p.m. on Food Network. The series will also be available to stream on Discovery+.