The Ashley endured physical agony (hey, sitting in a folding chair for 12 hours counts as physical agony) to attend the Teen Mom 2 Season 1 finale taping. It was worth it, because she got to see (and hear) a TON of great stuff that you won’t see on film when you watch the actual finale special! 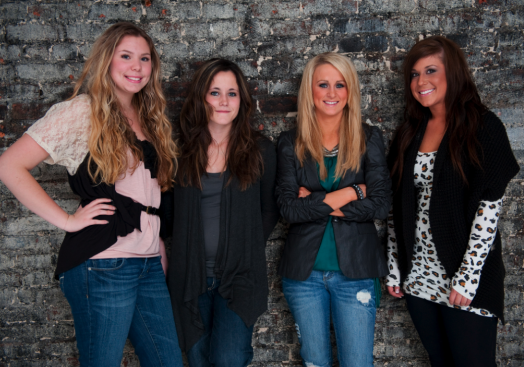 Luckily for you, she’s willing to tell you a lot of the stuff she saw!!!!

The Ashley arrived at the studio (it was filmed in Glendale, not Hollywood, FYI…not very glamorous!) and saw Jenelle outside smoking with her friend (not sure of her name, but she has some pretty horrible bows tattooed on the backs of her calves….those are NOT going to be cute when she gets old and fat!)

The Ashley is surprised that Jenelle is just a little pip-squeak of a thing…much smaller than she appears on TV.

The Ashley got her first glimpse of the rest of the cast when they came into the audience holding room to raid the snack table.

Here are my impressions:

** Leah: Was also much, much smaller in person than you would expect. She is totally pocket-sized. She appears to have hit the AMBO self-tanner hard before she came to the reunion show.

** Chelsea: The first thing I thought when I saw Chelsea was, “Giiiirlll…that hair needs to GO.” Seriously. Worst.extensions.Ever.  It looks like a creepy bleached blond Little Mermaid wig.

** Joe (Kail’s Baby-Daddy): Seemed like a very tense person. He also seemed like he didn’t want to be there. Being around him too much would make me nervous because he’s so intense.

** Jordan (Kail’s Boyfriend): This guy is like 8 feet tall. You can’t tell from TV but he is huge! He was sporting some bright neon yellow Nikes during taping. They blinded me, but they were pretty awesome.

** Corey: Poor Corey seems a little overwhelmed by all this fame. He always had this look on his face that was like “I can’t believe these people all want to hear what I have to say.” He seemed like a really nice guy, and as I said in the other post, you can tell just by looking at him that he is completely, utterly in love with Leah. Sooo cute. (Oh, and he was not wearing the “coon hunter” shirt or any camouflaged attire, just so you know. The Ashley was disappointed by this. She wanted to get a picture with the coon hunter shirt.)

Anyway, here’s some stuff that you will NOT be seeing when the Teen Mom 2 finale airs: