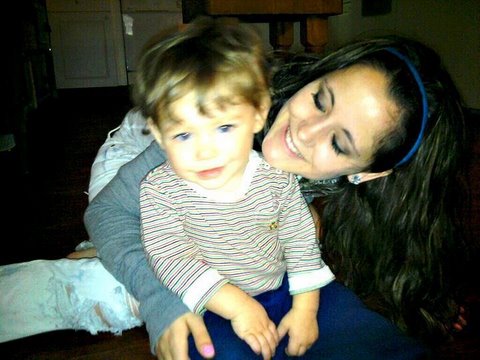 We all know that Teen Mom Jenelle Evansis basically just a heap of trouble. From fights with her mom, to being arrested for drugs, to other assorted run-ins with the law (more on that below), Jenelle has seen her fair share of trouble in the past year-and-a-half since she had baby Jace.

However, Jenelle believes that had she not gotten pregnant, she would have been in way more trouble than she is now.

At the Teen Mom 2 finale last week, host Dr. Drew asked all of the teen moms where they would have been had they not gotten pregnant. Not surprisingly, Kail and Leah said they would have gone away to school. Chelsea said she would have already been attending cosmetology school. (That chick still hasn’t gotten her GED yet…honey, let’s put down the extensions and nail polish and hit the books! This is getting ridiculous! Leah got her diploma and she has two babies!)

Leah believes she would still be with Corey; however the other girls said they would not still be around their baby-daddies had they not gotten pregnant.

Jenelle surprised everyone when Dr. Drew asked her where she would be if she hadn’t gotten pregnant. “I’d probably be in jail,” she told Dr. Drew, adding that she was hanging out with bad people at the time and probably would have gotten herself into a lot more trouble had she not gotten knocked up. (Wait, there are people that are worse than Creepy Kieffer?)

“It probably would have turned out bad for me,” Jenelle told him.

However, we haven’t seen the last of Jenelle’s trouble.

***SPOILER ALERT…DO NOT READ BELOW IF YOU DON’T WANT TO KNOW WHAT’S GOING TO HAPPEN!****

“I had to do it, Kieffer was hungry!”

On an upcoming episode, Jenelle, tired from arguing with her mother, decides that she and Creepy Kieffer should go on a getaway to the beautiful, relaxing state of New Jersey. Jenelle grabs some credit cards and jumps in the car with her boyfriend and they take a joyride up to “the Shore.”

One problem: those credit cards that Jenelle takes aren’t hers. They actually belong to (take a guess….) her mother Barbara! Jenelle ends up racking up nearly $1,000 in charges during her two-day Jersey bender!!! O-M-G!!

When Barbara confronts Jenelle about it, Jenelle  first denies it all together, then finally admits that she only “used the cards for food and gas.”

Good Lord! I know they smoke a lot of pot but how bad of a case of the munchies could they have gotten to rack up that bill?!?!  How much does that man eat? (Perhaps he also needed to purchase his weekly supply of Band-Aids, which would surely cost a couple of hundred bucks.)

This all happened back in October (with MTV cameras in tow, naturally.) Barbara did file a police report about the incident, however she ended up dropping the charges once the two of them figured out some sort of payment plan. Jenelle was pissed that her mom got the police report, writing on her Facebook that her mom was “dead to her.” (Um…wait, Jenelle stole money and she’s mad that her mother got upset about that??! WTF? Are we in the Twilight Zone here!?)

At the finale, Jenelle indicated that she has paid back all the money she spent on her little adventure.

If Jenelle thinks that she is better now than if she hadn’t gotten pregnant, I can only imagine what her life would have ended up like!