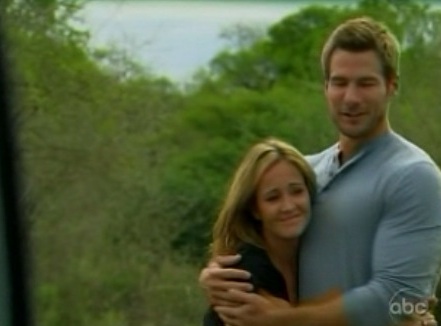 Us Bachelor fans were so enthralled last week by the roaring lions and the screams of passion coming from the tree house that we didn’t even notice that one major part of the traditional “Final 3” episode went missing last week!

Sure, they showed a lot of baby monkeys (awww!) and a lot of Chantel begging to stay, but they failed to show us the taped messages that the Final 3 girls always make for the Bachelor. Generally, all three girls tape a message for the Bachelor, telling him how they feel about him and how much they enjoyed their date, yada yada yada. The Bachelor views all three messages before he makes his decision as to how to cut.

This happened for this season’s Final 3 episode in South Africa. However, producers decided we didn’t need to see them. Why? Perhaps it was because they were running out of time (and of course, it would have been just criminal to cut out even a second of Brad running his mouth about how “he’s so different from the last time he was on the show.”)

However, The Ashley thinks the real reason they didn’t show this scene is because it makes the Bachelor look like he got dumped by Ashley H., instead of the other way around!!

This scene, which didn’t make it on the air, shows the girls’ video messages. Fast forward Chantel’s. It’s just basically one big heap of her talking about how she didn’t expect to find love, how she is so in love with Brad. Yuck. Gag me with a spoon. Emily’s is cute and sweet and right to the point (kind of like her!)

Ashley’s tape is where things start to get good. She basically tells Brad that she totally thought they were going to go all the way to the end, but their horribly awkward South African date made her realize that she shouldn’t be the one standing with the final rose at the end. (Good, because you totally didn’t have a chance of beating either Emily or Chantel for that spot, just sayin’!)

Brad is shocked that Ashley is basically begging him to cut her and free her from his awkward small talk and boring personality. He says he’s determined to talk to Ashley before the rose ceremony. Then he cuts her. Too bad she already cut herself pretty much.

Here’s the clip. Ashley’s video is last (of course.)