Last night’s episode of American Idol was perfectly suited for The Ashley‘s taste. She loves herself some Elton John, so this week’s Elton theme made her so happy.

If you missed the Elton Extravaganza last night, here’s what you missed:

Scotty started things off with a country song. (Who the hell knew Elton did a country song?!) Scotty, that little sleuth, was able to track down an Elton song with a twang. He did a perfectly nice rendition of whatever song it was; however, he’s starting to sound the same each week. He needs to change up his next couple of performances to keep things exciting. It’s unlikely that his ass will end up on one of the loser stools any time soon, as he has captured the hearts of every grandma east of the Mississippi River.

The Ashley Recommends: Scotty should try a song with a pop/country flair to it. Maybe something by Carrie Underwood would be exciting and challenging? 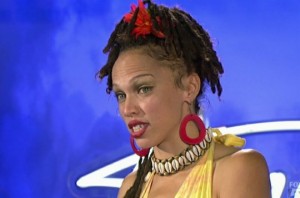 Naima  hit the stage next. Her reggae version of “I’m Still Standing” made me feel like I should be holding a $12 drink on the deck of a Carnival Cruise ship. The Ashley was on the fence about the performance, but she kind of liked it.

The Ashley Recommends: She should go back to her soft, Billie Holiday-esque songs. Those were very enjoyable.

Paul chose to sing “Rocket Man.” The Ashley had a hard time understanding any of the words. It was almost like he was singing in a different language or something. She did, however, enjoy his flowered suit. (Here’s a super cool article about that suit! He had to eat ramen for months to pay for it I guess.) 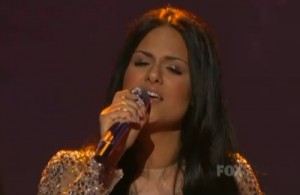 Pia chose (wait for it)…a power ballad. Shocking. There’s no doubt that her version of “Don’t Let the Sun Come Down on Me” was spot-on amazing, and she looked eye-popping in that sparkly dress.

Here’s the problem with Pia: she hits every note and she’s beautiful. But she’s pitifully boring. We know you’re going to come out in a sparkly dress and sing great.

J-Lo told Pia that she “felt her more than ever before” during the performances.

The Ashley Recommends: Give the power ballads a rest and do a song by an artist that no one would expect, such as Janis Joplin or even Led Zepplin. You can still show your range, but it will make it a lot more interesting for all of us.

Next up was Stefano, who chose The Ashley’s favorite Elton song, “Tiny Dancer.” Despite the fact that Jimmy Iovine said in the pre-performance clip that Stefano had no chance of doing well with this song, The Ashley thought he knocked it out of the park! He’s consistently improving each week. Stefano’s problem is simple: no one remembers him. Name off the Top 11 right now and he’ll probably be the last one you remember.

The Ashley Recommends: He needs to do something crazy. Next week he needs to be the one who lights the piano on fire! And he needs to stop dressing like he’s going to a baseball game.

James hit the stage in a performance that can only be labelled as an “extravaganza!” He sang “Saturday Night’s Alright” and hijinks ensued: he jumped on the piano, he burned the piano. And he sang really well.

The best part of the night was when James told Ryan Seacrest he was nervous about the burning piano part, saying he didn’t want to have a “Pepsi moment” (alluding to Michael Jackson’s infamous burning hair disaster  while filming a Pepsi commercial). Everyone seemed to freeze up at the mention of Pepsi, which is the rival of ‘Idol’s’ biggest sponsor, Coca-Cola.

The Ashley Recommends: James needs to have a softer moment next week. It would be the perfect time for him to do a ballad and wow the crowd, just like Adam Lambert did when he sang “Tracks of my Tears.”

Up next was Lauren, who had one of her best nights in a long time. She sang “Candle in the Wind” with a country twang.

The Ashley Recommends: A power ballad would be great for Lauren right about now. She can go back to fast, fun songs the following week.

Thia came on next and I don’t know what she sang. I don’t really care. This girl isn’t a bad singer, but she makes me feel like I’m in an elevator every time she sings.

Casey, back from The Big Save, chose “Your Song,” another one of The Ashley’s favorite Elton songs. He thankfully chose to keep the melody in tact and did a nice job. Casey went out there alone, with only the piano (which had miraculously recovered from its burning a few songs back) accompanying him.

He did well, however The Ashley doesn’t think it was good enough to save him for more than a week or two.

The Ashley Recommends: He needs to go back and play the bass again. That was by far his best performance and it’s time America sees that again from him.

The cute and cuddly Jacob was next. He was lovin’ his makeover! He picked “Sorry Seems to be the Hardest Word,” which I had never heard. He sang the first part of the song in a very strange kit, but picked it up and sang the hell of it in the end. Although The Ashley loves him, she has to admit it was a little boring.

The Ashley Recommends: Jacob should try out a rock ‘n’ roll song with a gospel vibe. Perhaps something like Elvis Presley’s “Saved” or even “You’ll Never Walk Alone.” I think he would give everyone chills. 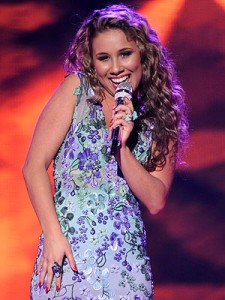 Haley, wrangled the climax position of the night. She did “Benny & the Jets,” which was perfect for her high/low voice. The judges raved, and Steven told her “You sing sexy.” This is true, but it must be uncomfortable for her to know that Steven is probably picturing her naked every time she sings.

The Ashley Recommends: Do something like this again! Don’t change anything!

We’ll see if The Ashley’s right. What do you guys think?