Last week, we watched the first episode of 16 & Pregnant Season 3, which featured Jordan Ward from St. Louis, Missouri. We watched as Jordan struggled to be a good mom to baby Noah while also keeping her boyfriend Brian and sister Jessica happy. Baby Noah was suffering from acid reflux, which made him cry constantly, making it even harder for Jordan.

The Ashley must admit she really likes Jordan. Of all the girls that will be featured on this season of the show, Jordan is definitely my favorite. (There are some really good episodes coming though, I promise! 😉 ) She seems like a girl with a good head on her shoulders, as well as a great support team.

So…do you want to know what Jordan’s doing today? Her episode was filmed in November of 2010, so a lot has changed since then!

The biggest change is that Jordan and Brian got married in January of this year! Here’s some photos of their ceremony! (Photos are from Jordan’s official fanpage.)The rumor is that MTV came back to St. Louis to film the wedding, so we may be seeing the footage in a Where Are They Now? special, coming soon! 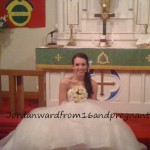 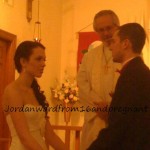 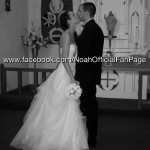 What else has changed with Jordan since her episode aired?

Brian has announced (via Twitter) that he and Jordan will be moving to California at the beginning of June! He is starting basic training for the Air Force. No word if Jordan’s twin sister, Jessica, will move with them…I can’t imagine them being separated, they seem so incredibly close!

More good news: Baby Noah’s acid reflux has gotten better, according to a post on Jordan’s fanpage. (This makes me happy, I felt so bad for that little guy during her episode!)

As for Jessica, she’s currently going to school, has a boyfriend and wants to open her own bakery someday. She is also starting to model again, according to her formspring.

One more thing that’s changed since Jordan’s episode aired? Her whole family is now a target of the paparazzi! (No offense to Jordan, but this is crazy; she was on one episode of a TV show….there must not be many celebrities in Missouri if the paps have to follow Jordan around!)

Tonight’s episode features Jennifer Del Rio, who gives birth to twin boys, both of which have health problems. Jennifer is the girl that we’ve heard the most about, due to the domestic violence issues between her and her baby-daddy Josh. You can read a little more about her here. I’ll be writing more about her later today.

The Ashley wishes Jordan, Brian and Baby Noah the best of luck. Obviously, she has the odds stacked against her, not only being a teen wife and mom, but also a girl who’s been featured on 16 & Pregnant. As The Ashley has reported in the past, the girls from this show who have gotten married have seemed to almost always find themselves at divorce court. (For example, Season 2’s Aubrey, Christinna, and recently Leah and Corey have seen the break-up of their marriages.) Let’s hope Jordan and Brian beat the odds!