Anyway, the episode starts with the resolution of last week’s cliff hanger: who went home, Jake or Kasey? Jake was ultimately the one to get the hook, leaving Kasey and Vienna to gloat over the fact that their minions voted like they were told.

The next challenge is announced and we learn that producers enjoyed last season’s nasty-licious kissing contest so much that they brought it back again. Michelle decides that, as a mother, she needs to withdrawal from the competition so she can set a good example for her daughter. Um…that’s all fine and good but did she forget about how she straddled Womack in the hot tub and basically threw herself at him every night during her season of Bachelor? I guess we don’t talk about that?

Ella, on the other hand, doesn’t feel like being a mother is any reason to not participate. In fact, she plans to stick her tongue down each guy’s throat, in the name of her son.

Holly’s up first and all the guys puss out and give her pecks on the lips, out of respect to Michael, her ex-fiance. Everyone except for Blake, that is, who is more than willing to schlack his perfect mouth onto Holly’s face. Michael looks like he wants to drown Blake in the STD-filled pool.

Melissa’s up next and I’m sure the guys were thankful that she was blindfolded. It made their job easier. They barely touch Vienna’s lips with their kisses out of “respect to Kasey.” (You know the real reason they did that was because they didn’t want to get the mouth herpes.)

Next, it’s the girls’ turn to kiss the guys. Ella goes first, followed by Erica, who lays her big fat fish lips all over every guy. She is literally eating their faces. Come on guys, is it really worth the rose to have to endure this?! 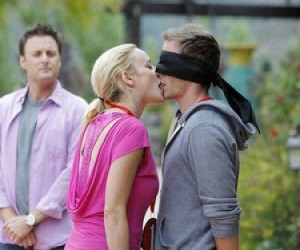 I love Chris Harrison’s face in this one…he’s just happy Erica’s not attacking him with her fish lips.

The girls are all unhappy that they have to kiss Kasey because apparently he has some stank breath (he must have caught the mouth herpes from Vienna?)

In the end, it’s Ella and Blake that take home the win. They learn that they will get to choose one person to take on a one-on-one date. Ella chooses Kirk (who I always forget is even on the show).

She says her son would be so proud of her for winning the kissing contest. WTF planet do these people live on? Yeah, I’m sure her son is going to go tell all of his playground buddies that his mama made out with five guys on a sleazy TV show and won the kissing contest. He should bring her lips to show ‘n’ tell.

Kirk and Ella take off in a sexy red car, while Melissa the Maniac is telling Blake that she’s really looking forward to going on the date with him. Um…too bad he hasn’t invited her. In fact, he wants nothing to do with her and has his eye on Holly. This will not end well for Blake. I just hope the producers hid all of the knives from Melissa before this scene took place.

While on their date, Kirk asks Ella about her son and her dead mom, while she asks Kirk about the terrible illness he had (‘member that from the Bachelorette?) These people are kind of depressing.

Ella and Kirk go up into a hot air balloon and it’s romantical. Too bad no one watching really cares about them. The only part I enjoyed watching was seeing the camera guy’s big noggin continually get into the shot while trying to film the scene while being crammed in the tiny little hot air balloon basket.

Back at the ‘Pad, Erica’s trying to get Blake to take her on his date. She does this by giving him a rubdown in the backyard (which, in turn, gives me severe nausea). She tells Blake (while rubbing her big ol’ paws all over him) that if he brings her on the date, they can do “whatever you want…” Cue the “Bachelor Sexy Time” music! (And me vomiting into the nearest toilet.)

Blake asks Holly on his date and everyone is upset. Um…did you not see this coming? Mike, Erica and Melissa are all pissed off for various reasons. Melissa runs upstairs and slams the bathroom door. Michelle goes up to console her but Melissa won’t let her in so Michelle has to talk to her through the door. Every girl has acted like this at one point or another….except usually it’s something they do in THIRD GRADE! These are 30+ year old women we are dealing with. Good Lord! Grow up (and get a job!)

After screaming at Blake that she will “ruin his rep!” Melissa runs all over the house, trying to persuade everyone to vote out Holly. She’s maniacally stirring her yogurt as she tries to convince everyone that Blake’s obviously crazy. At this point, shouldn’t someone call the hospital and arrange for her to be captured and taken to the nearest psychiatric ward? I hear UCLA has a fantastic one…

Everyone’s tiring of Melissa’s crazy train antics, especially Blake, who she corners while he’s electric-toothbrushing in the bathroom. He’s a brave little soul because if I were him, I’d be scared for my damn life. Maniac Mel totally has the ability to go all ‘Fatal Attraction’ on him and boil his bunny or something.

Let’s speed this crap up a bit, shall we? Blake and Holly fly to Mammouth mountain (On “the wings of love,” anyone?) for an quick ski getaway. They giggle, tickle and flirt their way through about 15 minutes and I’m just hoping they’ll just bone and get it over with already so we can all move on with our lives. Blake asks Holly to stay the night so they can continue their date. She accepts and they go cuddle by the fire and swap spit for the rest of the night.

Meanwhile, Mike’s also by the fireplace, reflecting (shirtless) about how much he misses Holly. He can’t believe that she has chosen to spend the night with Blake. The scene ends with audio of Holly squealing (in ecstasy?) while Mike downs a few shots of Jack Daniels to help him get through the night. And..scene!

The next morning, Blake and Holly arrive home to an anxious Michael. He confronts her and she confesses that they kissed…once. He’s devastated but says he wants her back. She looks dumbfounded. I’m screaming at my TV screen, “don’t you break his heart!” She later confesses to Vienna (who thankfully we’ve seen very little of this episode) that she is overwhelmed. I feel that way every Monday night after watching this crap.

It’s rose ceremony and I pray that the ‘Padders have had mercy on us viewers and will be voting off Melissa tonight. Kasey’s concerned that he will be the guy leaving at tonight’s ceremony so he throws out his ace in the hole: he tells everyone that he needs the money and that it’s a matter of life and death for his grandmother. No, seriously. That happened. Why do you have to bring Granny into this mess?

I am really hoping that Blake goes home. I pray to the reality TV gods to send him home so Holly and Michael will magically fall back in love. No such luck: William is the one that gets the limo ride to the airport.

On the girl’s side, it seems that all of Blake’s campaigning (and promise of free dental work for anyone that votes for Melissa?) has paid off: she gets a one-way ticket aboard the crazy train back to whatever mental health facility she escaped from.

Next week: Holly’s going to get down with Blake right in front of Michael (waa!) and Erica will tempt/threaten Blake with sexy lingerie.