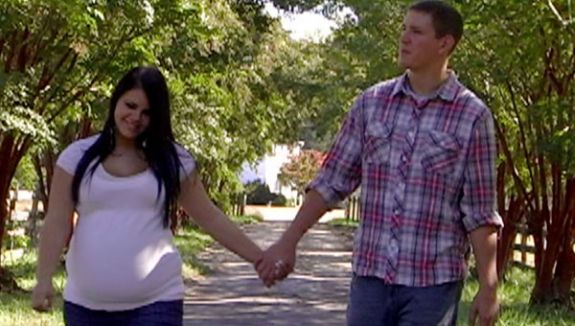 Gather ’round, kiddies, it’s time for another episode of 16 & Pregnant! Since this season is almost over and The Ashley has failed to meet her self-set quota of recaps, she is forced to recap even the crappy episodes of this show that weren’t that funny. That’s what The Ashley gets for being lazy though…

Anyway, this week we met Devon, a 16-year-old from Virginia who’s partial to massive amounts of Wet ‘n’ Wild liquid eyeliner, as well as men in uniform (mainly her Army boyfriend, who has just come back from Iraq). Devon’s boyfriend, Colin (pronounced “Kyle-Lynn” down in the Virginia) is 20 years old.

Devon lives at home with her mom, her dad (who is divorced from her mom but swings over to the house for a little pickle-tickle from his ex from time to time), her three siblings and four dogs. Also living in the house? One-year-old Kaylee, who belongs to Devon’s 18-year-old sister, Jane! Teen Mom in da hoooouse!

Colin, who will be known as “Kyle-Lynn” from here on out, has also taken up residence in Casa de Clown Car. Devon’s mom let him move in (as you do) because he didn’t get along with his own parents. (This seems to be happening a lot this season on ’16 & Pregnant!’ Do parents these days really let their daughter’s boyfriends move in so easily? Literally, I wasn’t even allowed to bring a boy home to watch “Total Request Live” with me when I was that age!)

Anyway, we learn that Devon’s mom wasn’t always so keen on her daughter having a live-in boyfriend. In the beginning of their relationship, Devon would have to sneak him in when she wanted to have sexy time. Eventually, though, her mom found out about their nighttime escapades. Rather than do what most parents would do if they found a 20-something dude in their daughter’s bed (flip out and grab the gun and/or call the cops), Devon’s mom invited him to move in! (We have just entered The Twilight Zone, people!)

Of course, Devon’s mom set some ground rules. Well, actually, just one…don’t get pregnant. Which brings us to Devon not only being pregnant but also starring on a show about being pregnant.”I didn’t think I’d ever have no baby by you,” Devon tells Kyle-Lynn while they are discussing their relationship one day.

Kyle-Lynn isn’t your typical ’16 & Pregnant’ douchewad dad. He not only served in Iraq, but also has a steady job, and is in the Army reserves. Because Kyle-Lynn is “bringin’ in the money,” Devon is able to focus on finishing high school…until that screaming ball of human drops from her loins, of course.

Next is the obligatory scene where the producers make the pregnant girl gather all of her friends around and talk about how the heck a baby got into her tummy. Devon says that she didn’t even know she was pregnant until she was five months along. (A few more months and she could also starred on I Didn’t Know I Was Pregnant, the show where unsuspecting women think they have to take a big poop and end up crapping out a baby instead. You should watch that show, it’s amazing!)

Devon’s friends admit that they had noticed that Devon had gotten a little…plump, but didn’t bring it up because it’s not polite. We learn that Devon got pregnant when she was switching birth control methods, much to the dismay of one of her friends, who is sad that she’s now lost “her partner in crime.” (Good Lord, I don’t even want to know…)

After her friends tell her that she’s going to miss out on all the parties and that her life is basically going to suck now that she’s pregnant, they leave. Thanks for the pep talk, ladies!

Later, Devon goes to speak to her teen mom sister, Jane about adding another person to the household. Jane is concerned about “all the babies” that will be living under one roof. Honestly, if I were their mom I’d strap a condom dispenser to the refrigerator. You take out food, you get a condom. It just makes sense! Otherwise, they’re going to have to start putting people in tents in the backyard if these girls keep procreating!

Devon’s mom tells her that it’s “kind of embarrassing” that she got pregnant, since her sister got pregnant as a teen too. Um…if only there was a person living in the house that was in charge of guiding and educating these girls on how not to get pregnant. Oh, wait, that’s you, Mom! Let’s get off our high horse and take our share of the responsibility, shall we? You let your daughter’s boyfriend move in and sleep in her bed! What did you think they were doing in there, playing Chutes and Ladders? Come on!

Devon’s mom also tells her that she will help with the baby as much as she can but she won’t be raising it. Devon straight-out just yells “Sh*t!” in response. I guess that kind of thwarted Devon’s pop-it-out-and-go-party plan.

After that conversation, Devon goes to speak to Kyle-Lynn about getting supplies for the baby. I really like this guy; not only does he have a job but he really cares about Devon and the baby. He’s a much better catch than most of the guys we’ve seen this season. (Who could forget Sarah‘s shrimping boat sweetheart, or meth-head Matt from Alex‘s episode!?)

Things are getting really cramped at Devon’s house, so her and Kyle-Lynn discuss moving out and getting their own place. Kyle-Lynn wants to move but is worried he won’t be able to afford a house right now. (Um..why can’t they just move into an apartment and work up from there? Why do they need to buy a house right now? These kids certainly like to speed things up, don’t they?!)

The next day is Devon’s baby shower. At the shower they play games (how much “yaaaawn” does it take to stretch around Dev’s tummy), open gifts and chat awkwardly for the cameras about Devon’s upcoming birth. Later, Devon’s not feeling well so her sister Ashley comes in to keep her company. I didn’t think it was physically possible for someone to wear more makeup than Devon, but Ashley has managed to pull it off. She literally looks like an extra from a Marilyn Manson video. Black liquid eyeliner does not have to go all the way around your eyes, girls. Or on your eyebrows. Just sayin’…

Soon, Devon starts having contractions so they decide to go to the hospital. Devon’s ready to give birth, or, as she so eloquently puts it “is as ready as someone can be to push a baby ‘out their crotch.” Awww…these are the things that you should be saving to write down in the baby book.

She’s admitted to the hospital and they give her the Pitocin to jump-start her labor. Things start to get rough for Dev, who is bawling and shaking. Kyle-Lynn, bless his heart, is being so sweet and trying to make her more comfortable. After 12 hours (and a photographic montage that seems to be replacing the live birth video on ’16 & Pregnant’ this season), Baby Landon is born.

With the new baby living there, the house is basically filled to the brim with crap/people/eyeliner and Devon is starting to feel the crush. Kyle-Lynn agrees that they need to get their own place, so he calls a realtor to see about “going to look at a house…or something.” Since he has good credit, Kyle-Lynn gets approved for a loan right away and they start to look at houses.

Things are going great until one night when Kyle-Lynn comes home and announces that he was laid off from his job. This obviously puts a wrench into their house plan and Kyle-Lynn is very upset. He tells the baby that he’s sorry he let him down and I just about burst into tears. This guy is so sweet. Devon’s basically a zombie throughout the entire conversation. Seriously, someone should check her vital signs to make sure she’s still alive.

I feel bad for the guy; he continues to job hunt but hasn’t found anything after two weeks. They have to go and tell the realtor that Kyle-Lynn has lost his job and will not be able to buy a house. Kyle-Lynn says he feels like a failure, and it’s obvious that he just needs a hug. Devon is giving him no support and is basically complaining about everything. She needs to go live with one of the other ’16 & Pregnant’ crap dads so she can appreciate how good she has it!

In the end, we never find out if Kyle-Lynn reenlists to the military, or if they end up buying a house….don’t worry; the Dr. Drew reunion show is only a few weeks away, and hopefully all our questions will be answered!

To read recaps of other ’16 & Pregnant’ Season 4 episodes click here and here.