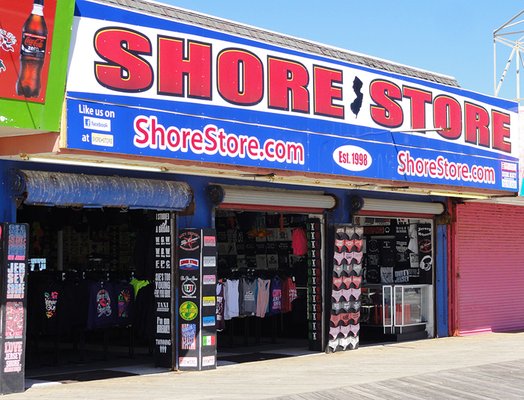 The New Jersey shoreline was devastated yesterday as Hurricane Sandy raged. Seaside Heights, the area of shoreline that once served as a playground for the cast of Jersey Shore, suffered horrifying damage.

The house used to film the show wasn’t damaged, according to a report Tuesday night by the Newark-Star Ledger. However, many of the restaurants, bars and other landmarks that served as the setting for the hi-jinks of Snooki and the gang have been destroyed or have suffered major damage.

The area surrounding Rivoli’s, the favorite restaurant of the ‘Shore’ crew and the place that The Situation took Paula to make their relationship official during a recent episode, is totally flooded, with boats floating in the streets, according to reports on Tom’s River Patch. Rivoli’s sits on Fischer Blvd. in Tom’s River, New Jersey, which was hit hard, but is still standing. The restaurant has sent out a few very scary tweets in the last few hours. 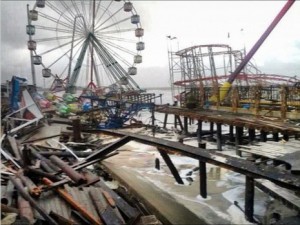 “Seaside is destroyed it’s like a war zone we need help,” followed by, “Raw [sewage] in the streets, cars are floating looting has begun.”

The Seaside Heights Boardwalk, where the ‘Shore cast members frequently hung out, was ravaged by the hurricane, with reports claiming that a huge piece of the boardwalk was ripped off and is now floating in the ocean, as are several of the boardwalk’s rides.

The Shore Store, where the cast worked, is still standing, according to a tweet by cast member Jenni Farley.

“Bubbas and Lucky [Leo’s] Arcade are no more but the Shore Store is standing but major damage,” she tweeted. The Shore Store posted this haunting photo on its Facebook page on Tuesday, showing the view from the boardwalk.

Another frequent hang out of the ‘Shore’ crew, The Surf Club, was completely destroyed, according to numerous reports.

“The level of devastation at the Jersey Shore is unthinkable,” New Jersey Govenor Chris Christie said.

Several of the ‘Jersey Shore’ gang’s favorite haunts, like Jimbo’s, Karma and Bamboo are still unaccounted for.

The Ashley sends her thoughts to all of her readers affected by Hurricane Sandy! There are still so many people that need help. If you are able to, please consider making a donation to help Hurricane Sandy victims by clicking here.

“Karma has made it through the storm! For the rest of the island it will take a little longer for it to get back on its feet. We appreciate all your support and hope that everyone in need of help all pull together especially in times like these.”

“Fortunately the Bamboo sustained little damage. Unfortunately Seaside itself was not so lucky. Hopefully all of us will be back better than ever.”

Click below to watch JWOWW discuss what happened to the house she shares with her fiance, Roger.