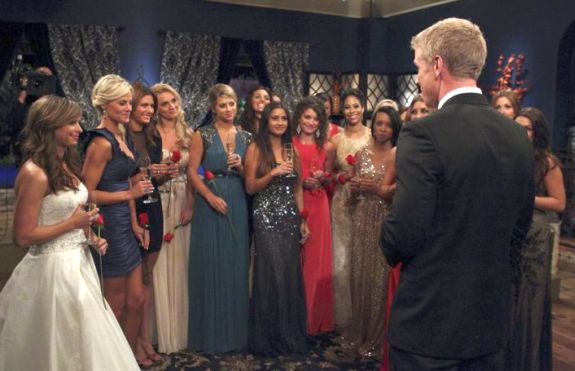 Over the past few years, The Ashley has done her best to answer your questions about your favorite reality shows. Every season she collects the questions that she receives on social media, in the comment sections of stories or in person about The Bachelor and The Bachelorette and does her best to find answers to them. From why they don’t eat on their dates, to the weird things contestants have to do to make themselves look good on camera, here’s a behind-the-scenes look at ‘The Bachelor’ franchise, as told by the people that have been a part of it.

On with the questions…

Q: Why the hell do they go on dinner dates if they aren’t going to eat the damn food?

A: Sharleen Joynt from Juan Pablo’s season answered this much-asked question on her blog recently. Apparently, no one eats on the dates because they are already full.

“In between the day and evening portions of dates, the lead and contestant go their separate ways with their producers to shower/change/get ready, do ITMs, and yes, eat an actual dinner,” she said. “The dinner provided on the date itself is mostly for show. It’s real food and edible but I never even tasted mine so I couldn’t tell you if it’s good or bad. I did however touch it once with my finger and it was cold. No one expects you to eat it, and I don’t know what happens to it afterwards.”

Q: Are the contestants on this show allowed to say “No” if they don’t want to do something the producers want them to do?

A: Contestants are not required to do anything they don’t want to. However, the producers will most likely manipulate them into doing whatever it is.

“While there’s truth that common sense says that you can say no, but [the producers] don’t let you believe no is an option. You can probably say no, but you don’t even think it’s an option,” former ‘Bachelor’ Jason Mesnick said during a podcast in January. “It’s like, ‘You’ve got to jump off this or you can never talk to Jason again’ or something. And [my future wife Molly] was like, ‘But I’ll die!’ and it’s like, ‘But that’s your choice.’”

Q: Are the contestants required to drink during the dates, cocktail parties, etc.?

A: No. No one is force-fed alcohol, or contractually obligated to drink at the parties. However, the producers make sure alcohol is always present and many contestants have said that they drink out of boredom after being cooped up in the Mansion or in a hotel room all day.

“It’s how they get you to be more talkative, more sensitive,” Leslie Hughes, a contestant on Sean Lowe’s season told The Daily Beast. “When I came in for the producers’ weekend, I remember it was like 12 noon, and they were like, ‘You want some champagne, wine?’ And I was like, ‘It’s 12 p.m., noon!’ And they’re like, ‘Welcome to the ‘Bachelor’ family.’”

Q: If these girls are on the show for over a month, how do they maintain their grooming rituals—i.e. hair dying, acrylic nails, etc. without leaving the Mansion?

A: Most girls arrive at the Mansion prepared. Many get laser hair removal before coming on the show so that they do not have to worry about body hair during filming. To maintain their hair color over the weeks of filming, Courtney Robertson said that many of the girls resorted to using over-the-counter hair dye kits. The girls are not allowed to visit nail salons, beauty parlors or makeup counters on their own during filming.

“My hair color got so light from all the sun; I couldn’t cover up all the gray hairs I have, so I started pulling them,” she wrote in her book. “I know a lot of the blonde girls had to request over-the-counter dye kits.”

The girls are able to request beauty products and a production staff member will go fetch them.

“The staff is really great at making store runs,” Courtney wrote. “I remember sitting around making lists with the girls for CVS and Walgreens runs. It was usually lots of nail polish remover. We spent a lot of time sitting around painting our nails.”

Q: How much of a say do the producers have in the contestants’ portrayed personality and look?

A: Quite a bit, according to numerous contestants.

“My limo entrance was suggested to me by producers,” Kylie Lewis, who became infamous when she mistakenly thought Juan Pablo had called her name during the first night’s rose ceremony, told Us Weekly. “And I agreed to it — it’s not that they force you to do anything. It’s just that they come up with the ideas, and then you go with it.”

Kylie also revealed that the producers asked her to dye her strawberry-blond-colored hair to a more vibrant shade of red, and wear a bright pink dress rather than the purple one she had picked out.

They also tried to force Molly Mesnick, who would go on to marry ‘Bachelor’ Jason Mesnick, to wear a different dress on the first night.

“They come to your room to see what you’re wearing that night before you get in the limo,” said Molly on her podcast. “They came into my room and I showed them what I was wearing and they looked through the rest of my dresses and said, ‘No I think this one would be better.’ I actually said, ‘No, I’m wearing this one.’”

It’s not much better for the person who is The Bachelor or Bachelorette.

“When I was on ‘The Bachelor’ they just handed me what I was going to wear every time,” said Jason. “I didn’t realize that I could have worn my own clothes.”

Q: Do they have maids and cooks for the girls living in the house?

A: No way! The girls are responsible for taking care of themselves. However, the show’s producers make sure that the downstairs areas (living room, etc.) are maintained.

“We have to do our own cooking, our own laundry,” Leslie Hughes told The Daily Beast. “We do everything you would do when you’re at home, except be able to go outside of your home.”

Q: When the Bachelor and the girls fly to other countries, do they all go first class?

A: Unless you’re the star of the show, you’ll be slumming it in coach. No way is ABC going to shell out the money for 15 or more first-class international tickets! However, if you’re the ‘Bachelor’ or ‘Bachelorette’ you do get slightly better accommodations than your suitors.

“The Bachelor/Bachelorette flies business class,” former ‘Bachelorette’ Ali said on her blog. “All of the contestants fly coach. Well this is how it was my season, things may have changed since then, but I doubt it.”

Q: Is the Fantasy Suite really the first time a Bachelor gets to spend time with a girl without cameras?

A: Sort of. There are moments of semi-privacy during the course of the season, as Sharleeyn Joynt explained in her blog.

“Water time is generally one of the VERY few times the lead and contestant ever get together, able to talk, without mics attached to them and without a producer chaperoning,” she wrote. “They know this. And all camera work is done from afar, so – and I can speak from experience – there’s the illusion of privacy. In my case there was a camera guy swimming around us underwater.”

Q: What really happens to the girls after a rose ceremony if they are cut?

A: Not much, apparently. The rose ceremonies generally last for hours, so it is usually morning by the time the rejects are shuffled out the door. According to Stephanie Simons, a girl from Travis Stork’s season who went home during the international dates, the send off is anything but glamorous.

“[We were] herded like cattle onto a bus at 4 a.m., given the opportunity to speak with a psychologist, and shuttled to the airport,” she said in an article she wrote for xojane.com. “We had just survived a 12-hour plane ride and were expected to turn around and endure it all over again.”

Q: Are the eliminated contestants allowed to stay in the country they’re in, or are they required to fly home that night?

“The producers couldn’t stop us,” she wrote. “So I went AWOL, skipping the shuttle back to the airport and heading for the Champs-Élysées with my Texan tour guide.”