Get ready for another installment of “Weird Things the Kardashians Shamelessly Hawk on eBay!”

Khloe Kardashian has just listed over 100 items on her eBay auction site. From time to time, Khloe and her sister, Kim, Kourtney, Kendall, Kylie, Kaleidoscope, or whoever else is in that family, go into their massive closets, pull out a bunch of clothes that were more than likely gifted to them by designers and sell them on eBay for profit.

The Ashley finds this boring, however. She has no interest in purchasing a shirt or pair of shoes that Khloe and her Klan deemed to ugly to ever actually wear themselves. Luckily for her, the Kardashians also list used items in their auctions–clothes and shoes that the gang actually wore, sweated in and stained with their Kosmetics!

Khloe’s auctions did not disappoint; she has listed several questionable items. Some are stained, some are scuffed and some are downright fashion Katastrophes!

Here’s a look at The Ashley’s “favorite” items up for sale: 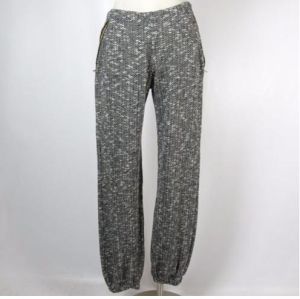 Fans can watch ‘Keeping Up with the Kardashians’ in Komfort while wearing Khloe’s used sweatpants! Currently going for only $50, the gray sweatpants are listed as “pre-owned” but in “great condition.” They must have been worn at a time when Khloe was Keeping Up with her Fitness because they are a size Small. 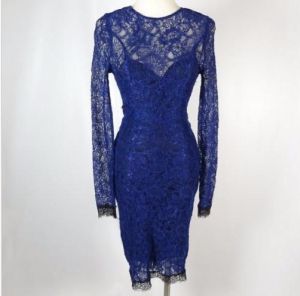 A blue lace dress from Khloe’s Kardashian Kollection currently has the highest bid price of all the 139 items she has listed. Although the dress retailed originally for much less when it was debuted as part of the Kardashian Kollection’s Fall 2014 line, people are willing to pay a stupid amount of money for this particular dress because Khloe was photographed wearing it at an event. Oh…and it appears that one of the back buttons is busted and is being held together by a safety pin. (That safety pin better be made of gold for that price!) 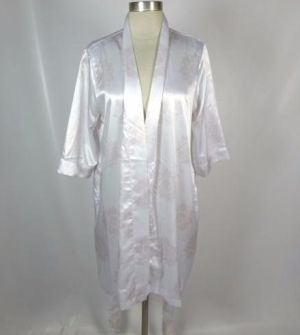 After a nice hot shower, there’s nothing nicer than slipping into your old bathrobe–except for slipping into Khloe Kardashian‘s old bathrobe! Khloe is hawking this white polyester Tisha Rae robe on the site. “Khloe’s own comfy robe,” as it is billed, is used but listed as being in “excellent condition.” It’s machine washable, in case you are worried that it still may have any of French Montana’s love juice on it! The robe’s bids have reached $102.50 (at press time), but you know some big ol’ perv with a Kardashian fetish will swoop in at the end and snap it up. Ew. 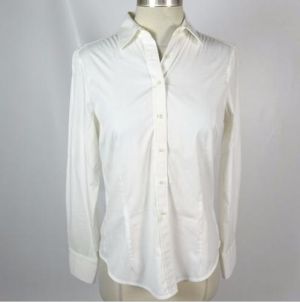 Taking a white shirt off without getting any makeup stains on it is no easy task, and it appears that Khloe hasn’t yet mastered the skill. This is evident in that a button-down white dress shirt she’s selling is described as having “some stains at interior from makeup.” The shirt, made by Zara, is only going for $12 currently, which is no surprise. After all, nearly every girl already has a white shirt in their closet with their own makeup stains on it. 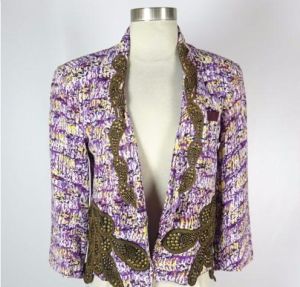 Sure, you can buy this purple studded Sono blazer at a store (but…why would you? It’s horrid!) However, this particular blazer was actually worn by Khloe– and it has the deodorant stains on the armpits to prove it!

Yes, folks. Khloe is selling a blazer with stains on the armpits. Hey–even Kardashians sweat!

This blazer, which appears to be made from remnants from of your Granny’s old couch, is listed in “good condition,” due to the stains. The listing notes that the deodorant stains are “not visible when worn.” The blazer, complete with Khloe’s Krusty Secret Ultra Dry stains, is currently going for $51.

“When the eBay numbers get broken down, the auction management agency that posts for me gets a percentage for all their hard work, then eBay listing fees, end of auction fees, eBay store fees, PayPal fees etc. All that add up to about half of the sale. Then I give 10% to charity…” she once said.

However, even with all of those fees paid out, each Kardashian still ends up pocketing a nice chunk of cash from their used clothing eBay auctions.

Those interested in snagging Khloe’s stained shirts, or any of the other 100+items for sale, have until Sunday to make their bids.