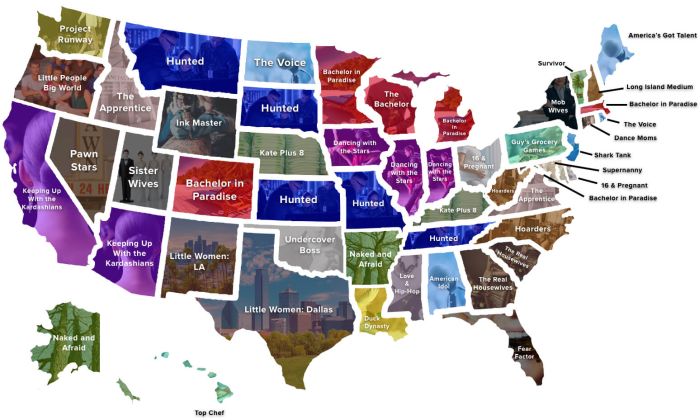 Do you ever see a reality show on TV and ask yourself, “Who in the world is watching this mess — (besides The Ashley)?” Well, we have answers… and also more questions after seeing some of these results.

CableTV.com has put together its annual report of favorite reality TV shows in each state. The site analyzed Google Trends data to determine each state’s reality TV show obsession. While many of the winning shows are not a huge surprise, we’re happy to tell you there are a couple of random front-runners — looking at you, Pennsylvania, and your love of Guy’s Grocery Games.

This year, CBS’s Hunted (the favorite in Montana, South Dakota, Kansas, Missouri and Tennessee) and ABC’s Bachelor in Paradise (the top pick in Colorado, Minnesota, Michigan, Massachusetts and D.C.) are the lone standouts.

When it comes to reality TV, a lot of viewers seem to prefer shows set in their own state, evident by Keeping Up with the Kardashians being the favorite in California, Mob Wives being the top pick in New York and Texans loving Little Women: Dallas.

While MTV hasn’t aired any new episodes of 16 and Pregnant since 2014, the show oddly came out on top in Delaware and Ohio. The report shows a similar situation in Alabama, which names American Idol as its favorite reality TV show, despite the show concluding in 2016. (Alabama folks are probably thrilled about the show’s revival and return to TV coming in 2018.)

Also favoring the reality singing shows are North Dakota and Rhode Island, who enjoy watching The Voice, and Maine, whose favorite reality TV guilty pleasure is America’s Got Talent. A number of other states prefer their talent shows with a dash of celebrity, with The Apprentice being the favorite in Idaho and Virginia and Dancing with the Stars having the largest fan base in Illinois, Indiana and Iowa. The folks in Utah love them some Sister Wives!

The report also shows that The Real Housewives fandom is the strongest in the southeast, with Georgia and South Carolina being the most obsessed with all things drama and table-flipping, while viewers in Alaska and Arkansas prefer watching Naked and Afraid contestants rough it in the wilderness, sans clothing.

As for Nebraska and Kentucky naming Kate Plus 8 as its top pick… Guy’s Grocery Games just got a lot more enticing. We take back what we said, Pennsylvania!

In an additional survey from the CableTV.com team, male and female participants agreed ‘KUWTK’ is “far and away the most annoying reality TV show,” while Teen Mom, Big Brother, Jersey Shore and Survivor were named the top favorites.

Here’s a listing of each state’s favorite reality TV show, according to CableTV.com‘s research:

Arizona: Keeping Up With the Kardashians

California: Keeping Up With the Kardashians

Illinois: Dancing With the Stars

Indiana: Dancing With the Stars

Iowa: Dancing With the Stars