(Note from The Ashley: Due to the seriousness of the episode, this recap will not be the humorous kind usually found on The Roundup, but will serve more as a rundown of what happened during Friday’s episode.)

On this episode of Mama June: From Not to Hot, viewers get an inside look at the events leading up to and immediately following the March arrest of Mama June Shannon and her boyfriend, Geno Doak.

As The Ashley previously told you, the two were arrested at an Alabama gas station after cops found crack cocaine and drug paraphernalia on both of them.

The episode, which was filmed seven weeks after June and Geno’s arrests, begins with a sit down conversation between Moriah, one of the show’s executive producers, June’s daughter Pumpkin and June’s sister Doe Doe.

Pumpkin calls the situation with her mom “a hot mess” and adds that “everything adds up” when watching the footage from the intervention they had for June. Both Moriah and Doe Doe say that June hasn’t spoken to them since the intervention, while Pumpkin says since June’s arrest, she’s lucky if she hears from her mom once or twice a week. While contact with June has been sparse at best, Pumpkin does confirm that June is OK—at least physically.

Pumpkin goes on to explain that there have been two court dates since the arrest, though a conflict of interest regarding June and Geno having the same attorney held things up and now June is trying to get a different attorney for Geno, much to Pumpkin and Doe Doe’s dismay.

(We then learn via screen caption that since recording this interview, June’s lawyer requested to be taken off of the case and a court date has not yet been set.)

The three women talk about how fun and light the show was in the first two seasons and how different the tone has been for the third—- June and Geno’s relationship included. Pumpkin says things began going downhill after Geno’s first arrest (featured on the show) for violation of probation regarding a DUI.

“Geno getting arrested was an obvious red flag,” Pumpkin says as viewers are shown previously unaired footage of the arrest itself.

The events following Geno’s (first) arrest and subsequent release were televised, including his pinky-promise to Alana that he’d never go to jail again. Doe Doe and Pumpkin are both bothered that he ultimately broke this promise to her.

Pumpkin says after the arrest, Geno and June tried to get things back on track, but she says Geno had his “eye on another prize,” and it appears that “prize” was other women.

After seeing a replay of the footage of Geno telling June’s ex-husband Sugar Bear that he would have “d***ed down” their waitress at the pool hall (as you do), we see a previously unaired clip from the same night of Geno calling June telling her he missed her.

“With Mama, she’s always had a history of picking the wrong guy and I really thought that Geno was going to be different,” Pumpkin says. “He fooled everybody into thinking he was this nice, caring person.”

Pumpkin shares with the women that someone messaged her claiming that Geno had offered them $2,000 to “do the nasty with him,” and apparently there are at least six others telling the same story.

In yet another previously unaired clip, we see June’s manager Gina stop by her house while calling repeatedly in an attempt to clear up some of the rumors being spread about Geno and his womanizing ways.

In the middle of the interview, Pumpkin gets a phone call from June. June tells Pumpkin that she and Geno have been staying at a hotel/casino and Pumpkin warns her to stop spending so much money. Pumpkin then puts June on speaker phone and Moriah asks why June hasn’t returned any of her calls or texts. June tells Moriah she only reached out once and then went “all g*****m hush-mouthed.”

June goes on to get onto Pumpkin for not coming to see her more, which Pumpkin defends by reminding her mother that she’s busy taking care of her own offspring (as well as Alana).

Moriah says social media has blown up with people asking why June continues to stay with Geno and Pumpkin explains it’s because June is afraid to be alone. Doe Doe adds that June is the only one trying in the relationship, a statement backed by the footage of June shopping for lingerie in the hope of getting Geno to “pet the kitty cat” and the footage of June convincing Geno to go to tantric yoga.

Moriah says June would tell her things with Geno were good but Pumpkin confirms that behind closed doors, they were anything but. Doe Doe talks about Geno’s controlling ways and Moriah adds that everyone on set could see that the two weren’t working out as a couple.

Despite the tension on (and off) screen, Pumpkin says she doesn’t think Geno was physically abusive toward June; however, Moriah points out that someone did call the cops in Alabama.

Pumpkin confirms it was June that made the call because “something” scared her enough to call the cops twice and hang up.

Next up, Moriah allows Pumpkin and Doe Doe to leave the set while a couple of “special guests” join her. She is then joined by Sugar Bear and his wife, Jennifer. Moriah asks if either of them were surprised by the news of June’s arrest and both appear to have been. Sugar Bear says he and Jennifer may have to start taking care of Alana as June certainly isn’t in a position to do so at the moment. 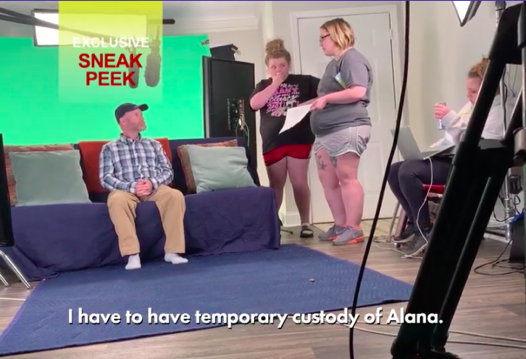 Sugar Bear and Jennifer leave after wrapping up their talk with Moriah and Pumpkin and Doe Doe rejoin her on set. The next topic of conversation is June’s physical state and Pumpkin shares that June has gained a lot of weight, which the group assumes is largely due to stress.

The three of them also talk about the issues with June’s swollen leg, broken tooth and arm pain. Pumpkin says people often ask why June is so hesitant to seek medical assistance and she explains that it’s because June has a fear of doctors (though June did visit a doctor regarding the pain in her arm, as well as the night she was having mini-strokes).

While June did not appear to be doing well throughout the entirety of Season 3, Moriah says things became worse toward the end of the season as June began sleeping until 2 p.m. and not answering her phone, preventing the crew from filming and putting the production in danger of going over budget.

It was around this time, Moriah explains, that June’s actions led the crew to call an ambulance as June appeared to be unresponsive despite sitting up with her eyes open (all while Geno continued drinking at the bar on June’s dime)—later revealed to be caused by mini-strokes. After rewatching the events of that night, specifically June’s initial refusal to go to the hospital without Geno, Doe Doe expresses her fears for June going forward.

“If she doesn’t get out of this relationship, whatever she wants to call it, then she may not survive it,” Doe Doe says.

Moriah calls that particular night the single worst night they’ve ever had on set and Pumpkin agrees that the situation was toxic as it became more evident than ever that June prioritizes Geno over her family. Pumpkin says June’s issues take a toll on the entire family, but Alana is impacted more than anyone.

In previously unaired footage, we see Alana crying in her bedroom and being comforted by Moriah and Pumpkin. Pumpkin says she felt that moving Alana in with her and Josh was the right thing to do—though we learn breaking that news to June was not as easy. Pumpkin says since moving her out of June’s house, Alana is doing well.

Moriah, Doe Doe and Pumpkin then talk about the intervention they held for June, which viewers will see unfold on the next episode. Moriah explains that the show brought in psychiatrist Dr. Ish Major to lead the efforts. Pumpkin says she initially didn’t think an intervention was necessary, but was convinced otherwise after talking to the doctor.

Doe Doe says the intervention was intense and she doesn’t know if she’ll be able to watch it—at least not without a box of tissues. Pumpkin says it “took a lot out of us,” and in a sneak peek, we see June irate outside of he house while Alana is inside crying, claiming that June scares her.

Adam Freeman, the show’s executive producer, commented on the intervention as well. 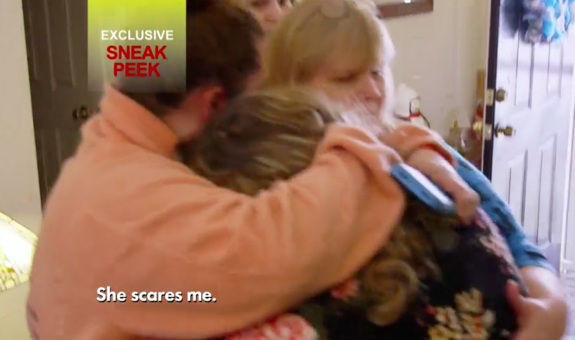 “June is not in her total right frame of mind right now, which means she’s unpredictable. If she bolts and we let her out of our sight, we don’t know when we’ll see her again,” he says.

The group closes the episode by talking about how they know June is a good person deep down, as well as a good mom.

“She’s always been loving and caring and giving and we just want fun June back,” Doe Doe says. “The one that loves her kids and puts them first and ya know, harasses me and drives me insane. I want that one back … I know she’s there.”

‘Mama June: From Not to Hot’ airs Friday on WEtv.