Corey Bohan had a major bone to pick with Spencer Pratt after the MTV reality star made several comments about the daughter Corey shares with Audrina Patridge, and he’s not happy with Audrina about it either!

Corey– who is the father of Audrina’s three-year-old daughter Kirra– took to his private Instagram on Wednesday to call out Spencer for the comments he made in an article written for Cosmopolitan after the premiere of The Hills: New Beginnings on Monday. In the article, Spencer wrote about the chemistry between Audrina and her ex(?) Justin Bobby, even stating that he thinks there’s a chance that Justin is the real father of Kirra.

“I wanna know whose baby that is. How do we know it’s not Justin’s baby?” Spencer wrote. “Let’s get a DNA testing kit for the reunion. Get a whole lab in there for a dramatic reveal.”

Corey failed to see the humor in Spencer’s “joke,” and slammed the MTV reality star for what he said, even bringing up the fact that Spencer is not above trashing his own family (i.e. his estranged sister Stephanie Pratt) in the press.

“It’s clear that you will do and say anything to keep your name in the headlines, even if that means dragging your family through the mud. You can say whatever filth you want about YOUR family, cast-mates or even myself but I draw the line when it comes to MY daughter,” Corey wrote in a post addressed to Spencer. “Kirra is an innocent three-year-old child. Joking about the validity of who her father is is vile and disgusting.

“I would hope that since you’re now a father yourself you’d have more tact and understanding but I can’t say I’m surprised.” 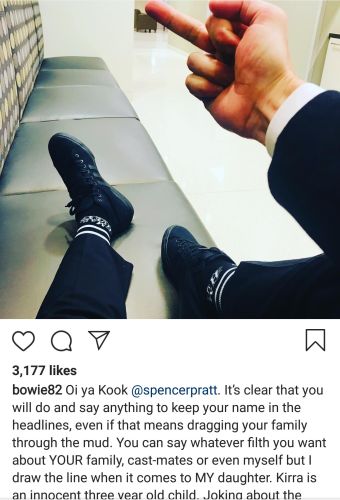 Corey, who battled Audrina in court in an attempt to keep Kirra off ‘The Hills: New Beginnings,’ pointed out that Kirra may read the comments Spencer made someday.

“The things you say publicly will be accessible to my daughter forever and I will continue to do everything in my power to not expose her to such nonsense,” Corey wrote. “Keep her out of your attempts to stay relevant ya f**k.”

He also called out the various publications that published or republished what Spencer wrote, and had some harsh words for Audrina as well.

“How shameful the mother of my child would not put an end to this immediately,” Corey wrote, following it up with the hashtag “#attentionseekingf**ks”

In addition to his comments about who Kirra’s father is, Spencer also had plenty to say in the article about Corey himself.

“Man, if we get Audrina’s ex-husband on Season two, it’s just going to be insane,” Spencer wrote. “That guy went off the deep end on social media when he saw she was filming. He kept tagging me in pictures saying ‘Audrina is disgusting to be hanging out with Heidi and Spencer.’

“It’s funny that he loved filming when he was on the show, but now that no one wants him around, it’s suddenly ‘an embarrassment?’ Come on, player. He’s Brody [Jenner]’s friend…so that should tell you everything you need to know,” he added. “From what I read on TMZ, he’s the world’s worst ex. It made me feel sorry for Audrina. That doesn’t mean I’m not going to light her up all season though.”

Corey and Audrina had a bitter split, and only recently settled their divorce terms. In January, they came to an agreement that they both were OK with, but by April, Audrina had still not signed the documents, causing Corey to try to get a judge to order Audrina to sign the documents and get the divorce finalized. Corey eventually signed off on allowing Kirra to appear on ‘The Hills: New Beginnings’, and Audrina signed off on the divorce.

Their divorce terms state that, while Kirra can be on ‘New Beginnings,’ she is not allowed to be part of any other shows or projects, unless Corey gives his approval. The exes share legal and physical custody of Kirra, and neither pay child support.

“Kirra Bohan. Since the day you were born til forever I’ll be here for you,” he wrote. “You are perfect in every single way. You’ll always be Daddy’s girl. So glad we are spending your special day together. Happy birthday darling. I love you. Dad.”