Days after a North Carolina judge ruled that Jenelle Evans and David Eason would regain custody of their kids after unexpectedly dismissing their ongoing custody court case, Nathan Griffith has broken his silence on having to send Kaiser– the son he shares with Jenelle– back to The Land.

Nathan— who cared for Kaiser for nearly two months while Jenelle battled CPS in court to regain custody of her kids— took to Twitter on Sunday to let concerned Teen Mom 2 fans know how to voice their feelings on the judge’s ruling.

“I’ve calm[ed] down a bit and [am] just relying on my faith at this moment,” Nathan tweeted. “I’m not going to put my two cents in but if anyone wants to put their input [in], you can visit: https://survey.nccourts.org/1480690875  to complete a survey. Any input will help. The judge’s name is Pauline Hankins. TY #TeamGriffith”

I’ve calm down a bit and just relying on my faith at this moment. I’m not going to put my two cents in but if anyone wants to put their input, you can visit: https://t.co/7eYlIm8dsX to complete a survey. Any input will help. The judge’s name is Pauline Hankins. TY #TeamGriffith

Nathan’s girlfriend, Ashley Landhart, who attended many of the court hearings with Nathan, retweeted the tweet. She has been a bit more outspoken since the judge’s ruling on July 3. Following the ruling, she posted a message to her Twitter that was obviously aimed at Jenelle and David.

“Back to normal, sharing you entire life on social media trying [to] prove you’re something you’re not #overcompensating #rememberjoshpowell,” she wrote in the now-deleted tweet. 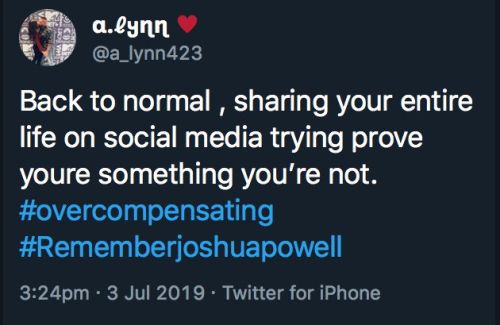 The caretakers of the other children returned to Jenelle and David have also spoken out after the ruling. Jenelle’s mom, Barbara Evans, who was caring for the couple’s two-year-old daughter Ensley and has full custody of Jenelle’s son Jace, told Radar Online she is “sick to her stomach” about the ruling.

Shane Rich, who is the stepdad of David’s daughter Maryssa, spoke to The Ashley on Friday, stating that he and his wife Whitney are concerned for Maryssa’s safety and are very upset they had to bring the 11-year-old back to David.

Until this point, The Ashley had refrained from posting the name of the judge who made the ruling and dismissed the case. However, now that it’s been posted, The Ashley can state that Judge Pauline Hankins is very familiar with Jenelle.

Back in August 2013, Jenelle went before Judge Hankins with a slew of charges, stemming from her her April 2013 arrest with then-husband Courtland Rogers. Jenelle was charged with simple assault; possession with intent to manufacture, sell and deliver heroin; possession of drug paraphernalia; and possession of a Schedule II controlled substance [which was reported at the time to be Percocet].

When Jenelle faced Judge Hankins in August of that year, the judge dismissed all of the charges against Jenelle except for possession of drug paraphernalia. She found Jenelle guilty of that charge and sentenced the reality TV star to 48 hours behind bars.

Anyway, Nathan has refrained from making any other public comments about the outcome of the case. However, he did respond to a fan who reached out to him on Instagram on Friday to express sympathy about Nate having to hand over Kaiser to Jenelle.

“I can’t imagine how painful it was giving him up. Keep fighting man,” the fan wrote.

“It was more than words could explain,” Nathan responded, adding that he would continue his battle to regain custody of Kaiser. “Thank you and that’s, of course, my plan.”