This week’s episode of The Hills: New Beginnings gave us more drama and suspense than a soap opera… which is basically what this show is, right? From dealing with a natural disaster, to a guest appearance from doctor-turned-MTV-reunion-host Dr. Drew Pinsky, to Justin Bobby offering his thoughts on life, the episode was one of the most-interesting yet.

Here are the top 5 wildest moments from this week’s episode of ‘The Hills: New Beginnings’:

While planning an upcoming group trip to Las Vegas to watch one of Brody Jenner DJ-ing gigs, Jason Wahler’s wife Ashley reveals that she and Jason won’t be coming along due to Jason being a recovering gambling addict.

“Vegas is like, a very uncomfortable place for me,” Ashley tells Mischa Barton and Stephanie Pratt. “Jason had such a bad gambling addiction … He gambled like, hundreds of thousands of dollars. We ended up selling our house because he gambled away so much money.”

Ashley went on to reveal that most of Jason’s demons revolve around alcohol.

“It started to domino,” she said in her interview. “I found the alcohol in the garage … I’ll never forget, I was like, out running errands and he basically sold the house and everything in it without even telling me. … So I get very nervous about relapse. I’m nervous my husband’s going to drink. Like, that’s what I’m f**king scared about.”

2. Dr. Drew brings his trusty blazer to ‘The Hills.’

While the rest of the group heads to Vegas, Heidi Montag and Spencer Pratt join Jason and Ashley at a charity event where Jason is presenting Dr. Drew Pinksky with an award. Prior to taking the stage, viewers get to learn a little more about Jason’s addiction recovery.

“I was a mentor in recovery by Dr. Drew and I was asked to be on the board for the Los Angeles Mission,” Jason says. “I’ve overcome a ton of my demons and I think that’s why I’m so passionate about inspiring people to show that you can totally transform your life and that you can actually find a life that’s worth living.”

Jason also reveals that eight months ago, he relapsed.

“When I was younger I didn’t have much to lose, there was so much to lose this time,” he says. “I almost lost my marriage, I almost was not there with my kid, I spent probably $2 million in gambling, just bad business deals, everything was gone. I was so deep and dark in this that I really felt like there was no way out and that’s where suicide starts to creep back in and thank God I have such a solid wife and somebody that really believes in me.”

When presenting the award, Jason gives Dr. Drew credit for much of his recovery success.

3. Stephanie’s gets fired up.

Once some of the group arrives in Vegas, they receive word of the Woolsey wildfire rapidly spreading back home. Brody’s wife Kaitlynn calls Frankie Delgado to let him know that she and Brody’s Malibu home is in serious danger and they most likely won’t be making the trip to Vegas.

For most people, the natural reaction to this news would be to show some concern—- or at the very least, some interest—- however, the only concern Stephanie has is how the wildfire will ruin her night. After Justin Bobby Brescia expresses worry for his friends back home, Stephanie attempts to shift the focus.

“Justin wants to sit and cry all night,” she says. “I just want you to know that Brody’s not thinking of us and we don’t need to be calling him every five minutes. I’m already bored of it. Snooze. I came to Vegas to party.”

Later on, Stephanie reiterates her non-interest in the whole fire ordeal over dinner.

“Is this what tonight’s gonna be about? Fires?” she asks. “We’ve been beating this horse dead. There’s nothing that we can do from here.”

While Kaitlynn takes heed of advisories to evacuate due to the wildfire, we learn that Brody opted to stay behind for some reason. 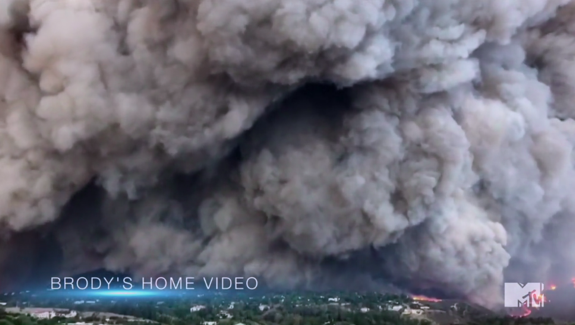 “Brody wants to stay and protect the property and make a mad dash on his motorcycle, worst case scenario,” Kaitlynn says. “I think he’s crazy, but he said this is what he always does when there’s a fire in Malibu …”

Later on in the episode, Kaitlynn speaks to Audrina Patridge on the phone and tells her that Brody “doesn’t plan to leave unless the house burns down.”

“I feel so frustrated with Brody because all of the things in our home at the end of the day are replaceable,” Kaitlynn adds. “Nothing is worth losing your life over. I’ve never experienced this kind of stress.”

Welcome to the Jenner Family, Kait!

5. Justin Bobby gives us his thoughts on life…and stuff.

Given the heaviness of this episode, we thought it best to end with a collection of our favorite Justin Bobby-isms from this week’s show. (You’re welcome.)

– “I love hanging out with them, I love seeing them, I love correlating, I love all that s**t. I think when we’re together there’s a camaraderie, I just don’t think very much past it.”

– “Growing as a man and knowing my boundaries and limits, I chuckle at immaturity, I laugh at stupidity and I just disregard, like, negligence.”

– “I don’t know what it is, I can’t go down to that level. I think it’s so lame, so immature, so catty and so youthful.”

Never change, Justin Bobby… but maybe wash your hair every once in a while…