Larissa Dos Santos Lima, star of 90 Day Fiancé and the ex-wife of Colt(ee) Johnson, has found herself in yet another messy breakup.

According to The Blast, Larissa filed a police report against her ex-boyfriend Eric Nichols on September 18, claiming the 26-year-old has been harassing her. This week, Larissa revealed that Eric has also been harassing her friend Carmen (whom Larissa has lived with since her divorce from Colt) by sharing private messages from her social media account.

“90 Day Fiance” blogger John Yates stated on his Instagram that Carmen threatened Eric on social media that she would take legal action regarding the now-deleted posts and she also called him out for allegedly mistreating Larissa during their eight-month relationship. Carmen encouraged Eric to “be a f**king man and move on,” adding that after breaking up with Larissa “every single day” he should be “happy she finally accept[ed] the fact it did not work out.”

Piggybacking off my last post here is the full text Carmen posted – notice how Eric blurred out that he broke up with Larissa every day? Then swipe for Eric’s rebuttal. #90DayFiance #90dayfiancehappilyeverafter

Larissa announced her split from Eric earlier this month, eluding to the fact on social media that the two had parted ways peacefully.

“After 8 months of being Erickee’s girlfriend I have to tell my followers that we have decided to break up and go our separate ways,” Larissa shared on Instagram, while poking fun at her tendency to add “ee” to certain words and names. “There is no hard feelings or regrettees, but I need to look in my own soul and focus on being the best Larissa I can be.”

Eric later disputed Larissa’s comment when he oddly revealed by way of his Instagram bio that he had to find out about he and Larissa’s breakup from his mom, who saw it on Larissa’s Instagram. 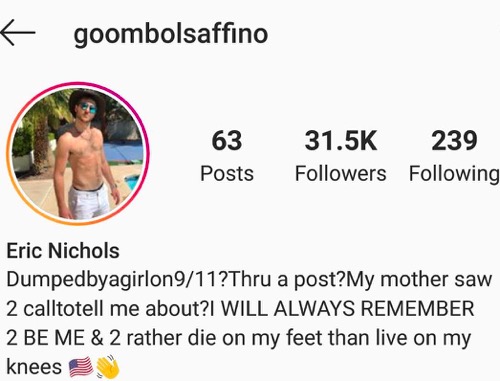 “Dumped by a girl on 9/11? Thru a post? My mother saw 2 call to tell me about? I WILL ALWAYS REMEMBER 2 BE ME & 2 rather die on my feet than live on my knees,” Eric’s profile read shortly after the breakup.

Eric then decided to retaliate against Larissa by teaming up with Colt for some since-deleted social media photo ops featuring both of the guys, Mother Debbie and even the infamous slot machine.

As for Larissa, it appears that she is currently single.