Jay Manuel, former Creative Director of America’s Next Top Model, is spilling the tea about his time on the reality competition show and revealing that it wasn’t always something to smize about.

In a recent interview with Variety, Jay said that, despite serving as the show’s creative director, he was often “scared to speak up” during “uncomfortable” moments – some of which recently went viral.

Earlier this month, show creator/head judge Tyra Banks was called out on social media after problematic vintage ‘ANTM’ clips (including a photoshoot featuring contestants in blackface) resurfaced on social media. Tyra commented on social media about a week after the controversy began, calling some of the moments “really off choices.” She doesn’t appear to have commented further on the issue at this point.

Been seeing the posts about the insensitivity of some past ANTM moments and I agree with you.  Looking back, those were some really off choices. Appreciate your honest feedback and am sending so much love and virtual hugs. ❤️

After Tyra issued her statement, Variety reports that ’ANTM’ co-creator Ken Mok added his own, admitting that he will now look “at some of those moments and cringe.” However, Ken went on to take some of the heat off of Tyra, telling his followers that “the entire creative team made the choices on those shows – not just Tyra.”

In his recent interview, though, Jay denied Ken’s claim and argued that, while the team was able to voice their creative concerns, Tyra and Ken made all of the final decisions as to what happened on the show.

“Many times when you’re working in an environment like that, you have to listen to your executive producers and ultimately the two voices at the top were Ken and Tyra,” Jay said. “There were sometimes several objections by other producers and myself about layers that were added to creative and we were just told to execute. I think it’s a little unfair to throw the whole team under the bus. The whole team wasn’t really supported, so to speak.”

Jay also noted there were certain people working on the show in senior positions that caused others (including several producers) to become “very scared to speak up.”

In response to Jay’s statement, Ken responded, noting that Jay was “involved in many creative decisions throughout his time with the show” but admitting that “the ultimate decisions always rested with us, the creative directors of the show, and we continue to take full responsibility.”

Jay elaborated further on the backlash Tyra has received during an episode of Jays Chat, a weekly Instagram Live show he co-hosts with Miss J. Alexander (who also appeared on ‘ANTM’ for many years.) During the live stream, the former ‘ANTM’ stars break down previous seasons of the show and reveal behind-the-scenes secrets. While discussing Cycle 4, the recent criticism was addressed and Jay opened up about the blame being placed on Tyra.

Gather round children… @miss_jalexander & I are taking a stroll down memory lane into all things #ANTM Cycle 5 – and yes, we will be discussing Bre and those damn granola bars 🍫 Tune in on #InstagramLIVE for #JaysChat every Friday at 12p ET/9am PT. You can watch all episodes of our chats by heading to Youtube.com and searching “JaysChat” Type your questions for today’s chat below! 👇🏽

“ … I really do think Tyra is being thrown under the bus unfairly but I’ll be honest … at the same time, like, I can’t defend her,” Jay said. “I can’t get inside her head of what she meant. This cycle a lot of very controversial things happened and I’m just gonna stipulate this guys, everyone keeps asking, ‘Well who allowed that? Oh but the Jays stood by and let this happen.’ And this and this and this and that.’ Okay, let’s be real. It was Tyra, as she always says in the press, it was her show. It was her show, she was the host … .”

Jay went on to reveal that Cycle 4 was the first season that Ken and Tyra started doing “the huddles” which changed his role, creatively speaking. Regarding his duty to fulfill his role as creative director for the controversial “ethnicity swap holding babies” shoot, Jay said it’s why he has “PTSD from this season.” (You can check out a scene from that episode below.)

Jay said people rediscover the episode “every two years” and “try to cancel Tyra online, which I think is crazy.”

In addition to speaking out about his time on ‘ANTM’, Jay has written a novel inspired by the people in his life, including a certain former boss.

Jay’s upcoming book, The Wig The Bitch & The Meltdown, is described as a “satirical look behind the scenes of Model Muse, a fictional, reality model competition show and global phenomenon.” The book reportedly tells a tale of “ambition, jealously, blackmail, mystery and revenge” through the eyes of the story’s “moral compass, Pablo Michaels.” The host of the fictional model reality competition show featured in the story is a character by the name of Keisha Kash.

Hold on to your #wigs…THE WIG, THE BITCH & THE MELTDOWN is my new #novel & a satirical look behind the scenes of “Model Muse.” Yes…inspired by #ANTM #BTS moments. 😜🤐🔥 Pre-order your copy now on https://t.co/1bDIK77nfH #TheMeltdown #JayManuelNovel pic.twitter.com/rF9Vf0uTPC

As if the character names, cover font and promotional video don’t blur the lines between reality and fiction enough, a chapter titled “The Meltdown” features Keisha Kash losing it on one of the contestants, á la Tyra Banks. And yes, Jay admits the chapter was inspired by the famous “we were rooting for you!” scene from Cycle 4.

Jay said Tyra was not consulted about the book, nor were any of his former ‘ANTM’ colleagues. In fact, he says he doesn’t have much of a relationship with Tyra at all these days. Aside from emails “over the past few years,” he said the last time he and Tyra ran into each other was in 2017.

“To be very honest, we really have no relationship to speak of, which is really sad,” he said.

While it would seem that “no relationship” constitutes a bad relationship, Jay gave Tyra a shout out on social media just last month, calling her his “#WCW.”

“We may no longer speak every day or see each other often, but this woman to my right taught me some of the biggest lessons life has to offer,” Jay wrote. “Self-validation is the ONLY thing that allows you to conquer your #fears & achieve your #dreams.”

#WCW We may no longer speak every day, or see each other often, but this woman to my right taught me some of the biggest lessons life has to offer. Self-validation is the ONLY thing that allows you to conquer your #fears & achieve your #dreams. 👊🏽🙏🏽✨✨✨

In response to one of his followers asking why he and Tyra no longer follow each other on social media, Jay simply replied, “it’s complicated.” 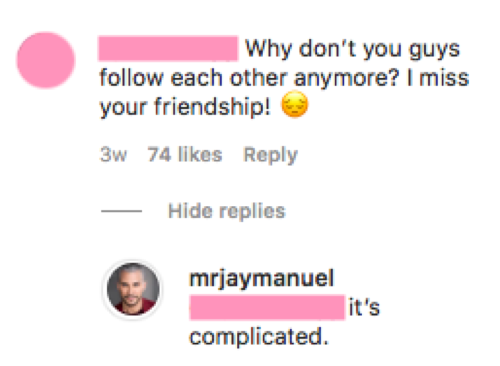 Jay’s book, The Wig, The Bitch & The Meltdown, comes out August 3 and is currently available for pre-order.

You can watch the entire YouTube episode of Jays Chat, in which both ‘ANTM’ Jays talk about the controversy, below!