Whitney Way Thore, star of TLC’s My Big Fat Fabulous Life, is dancing her way back to the singles scene after confirming her split with fiancé Chase Severino.

The news of the couple’s breakup comes not long after both Whitney and Chase deleted (most of the) photos of each other from social media and after rumors began floating around that Chase had gotten another woman pregnant.

On Thursday, Whitney confirmed on Instagram that the rumors were true and that she and Chase had ended their engagement.

“Hey y’all. This is a really weird and uncomfortable thing to have to ‘announce’ on social media, but as I get more questions and hear more rumors, I figured it was time,” Whitney wrote. “Chase and I are no longer engaged.”

Whitney went on to reveal that after “a lot of ups and down and still living apart, Chase reconnected with a woman with whom he has had a long history.”

“Chase recently told me this information and the fact that it had resulted in a pregnancy,” she continued. “Chase will be a father in October.”

Whitney asked for privacy for all involved and said she was “not interested in anything hateful being directed toward anyone.” 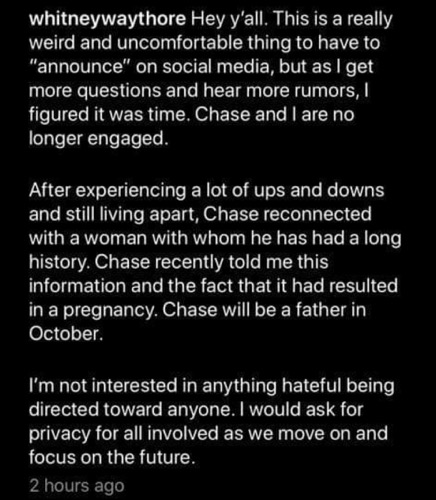 Chase confirmed Whitney’s claims on his own Instagram on Thursday, noting he was “very excited” to welcome a child in the fall, and even directing his followers to Whitney’s post for details on their split.

“I have nothing but love and respect for Whitney and our time together,” Chase added.

He thanked fans of the show for their support, and asked them not to troll his future baby mama.

“As we now go our separate ways, I ask for privacy for Whitney, myself, and the mother of my child who wishes to remain anonymous.” 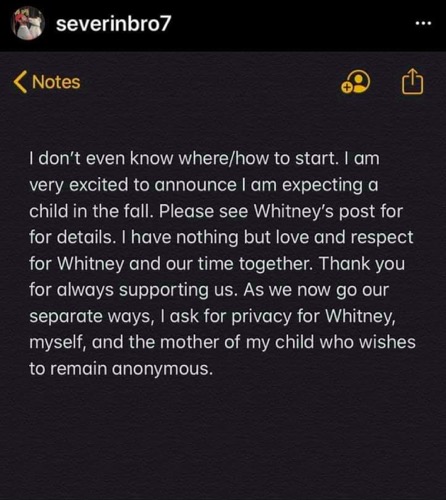 Whitney and Chase’s engagement was shown on the most recent season of ‘My Big Fat Fabulous Life’, which aired earlier this year, and the couple’s engagement party was featured on the Season 7 finale.

At this time, there has been no news regarding an eighth season of ‘My Big Fat Fabulous Life’.

Currently, Whitney is spending her time quarantined at home in North Carolina with her best friend Buddy Bell.

@thebuddybell and I have started a weekly ritual wherein he brings Mom and me groceries (and this week a birthday present!), then I bring the animals out on the porch for him to look at them and then we say bye and he drives back home. I have good friends! (I KNOW MY YUCCAS ARE DYING PLEASE CUT ME SOME SLACK)

At press time, Chase and Whitney were still following each other on Instagram.