Days after it was announced that Matt James had been cast as The Bachelor franchise’s first-ever Black male lead, a former producer from the show is calling out ABC for its lack of diversity in casting previous seasons.

In an open letter to ABC posted to her Instagram account, former casting producer Jazzy Collins claimed that the show didn’t cast men or women of color beyond “the token Black person, Asian person or Latinx person to satisfy what you believe to be the needs of the viewers.”

In addition, Jazzy stated that female contestants who wore their hair in “afros, braids, locs, etc; weren’t even given a chance because of the white standards of beauty.”

Jazzy, who joined the show for Rachel Lindsay’s season of The Bachelorette as a casting producer (according to her profile on IMDB.com), said she didn’t see any significant changes after Rachel was named the franchise’s first Black lead. (Prior to Matt’s casting, Rachel was the one and only Black lead in the franchise’s 40 seasons.)

“I am a Casting Producer who previously worked on ‘The Bachelor’ and ‘Bachelorette’ series for five seasons,” Jazzy’s letter began. “I was the only Black person in the casting office from when I was hired for casting the first season of Black ‘Bachelorette’ through the four seasons I worked on afterwards.”

Jazzy states that she and the other casting producers were “called on to have a very diverse cast” of men for Rachel to date.

“My hope was that having a racially diverse cast of gentleman would be an important milestone that would continue into the future,” Jazzy wrote. “That was not the case.”

Jazzy stated that, for the season following Rachel’s season, (which would have been Arie Luyendyk Jr.‘s season of ‘The Bachelor’), casting returned to where it had been before Rachel’s season in terms of diversity.

“The cast was predominantly white,” she wrote. “The only Black women who were picked to be in the running had weaves or chemically straightened hair, were ‘ethnically ambiguous’ or were not considered ‘too Black.'”

Jazzy stated that, when she voiced her anger about the subject, she was labeled “aggressive.”

“Your show has white-washed for decades, inside and out,” she wrote. “Your head of post-production is white. Your casting director is white. Your executive in charge is white.”

The gang is all here! Watch the drama unfold during the premiere of #TheBachelor on Monday, January 6.

Jazzy then wrote that show not only needs a diverse cast but also a diverse production and casting team to run it.

“I am calling on you to select a diverse cast and production team for Season 25 of ‘The Bachelor’ and moving forward,” she continued. “Not only is it important to have a diverse cast reflect what the rest of America looks like, it’s important for the production and casting teams to be able to share the same experiences as the cast members.”

Jazzy stated that, despite fans calling for a Black male lead for years, ABC only cast Matt after getting extreme pressure from fans and former cast mates.

“Many called for a Black ‘Bachelor’ for years but you ignored it,” she wrote. “I am happy to see you’ve chosen Matt James as your first Black ‘Bachelor’ in 25 seasons [of the show]. It took a pandemic and the Black Lives Matter movement to take a moment and re-access the issues at hand, which I’ve called on for years.”

Jazzy went on to state that having a diverse casting and production team will help non-white cast members “relate on an emotional level.”

“A Black, Asian, Latinx, Indigenous man or woman should not have to walk on a set for up to eight weeks and stare at a crowd of white faces while they pour their hearts out on national TV without having a diverse, understanding team to guide them through the process.”

Much like Jazzy, Rachel Lindsay was glad to hear of Matt’s casting; however, she called for continued change within the franchise in a series of tweets posted last week. 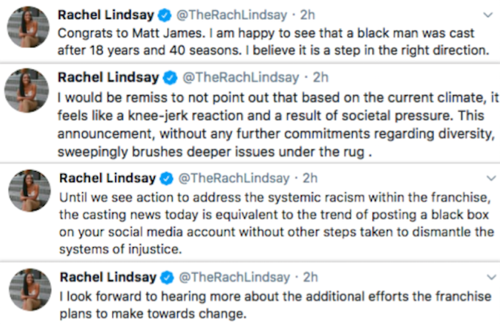 “Until we see action to address the systemic racism within the franchise, the casting news today is equivalent to the trend of posting a black box on your social media account without other steps taken to dismantle the systems of injustice,” she tweeted. “I look forward to hearing more about the additional efforts the franchise plans to make towards change.”

The show has also released a statement further acknowledging its lack of diversity, assuring fans that it “can and will do better.”

“We are excited to move forward with both Matt James as the new ‘Bachelor’ and Clare Crawley as our new ‘Bachelorette,’” show host Chris Harrison tweeted last week on behalf of himself and other franchise executive producers. “We acknowledge our responsibility for the lack of representation of people of color on our franchise and pledge to make significant changes to address this issue moving forward. We are taking positive steps to expand diversity in our cast, in our staff, and most importantly, in the relationships that we show on television. We can and will do better to reflect the world around us and show all of its beautiful love stories.”

RELATED STORY: ABC Announces Matt James As the Next ‘Bachelor’; Franchise Pledges to “Make Significant Changes” Regarding Lack of Diversity