Talan and his wife, Danielle Torriero, welcomed daughter Hudson Isabella on Wednesday, E! News reports. Talan shared the happy news on social media, along with some photos of the family’s new addition.

“Mom and baby are both happy and healthy,” he wrote. “[Danielle] did such an amazing job.”

A few of Talan’s former ‘Laguna Beach’ costars shared congratulatory messages with the proud “#girldad,” including Lauren Conrad who sent her “congrats” and Frankie Delgado who posted some emojis. 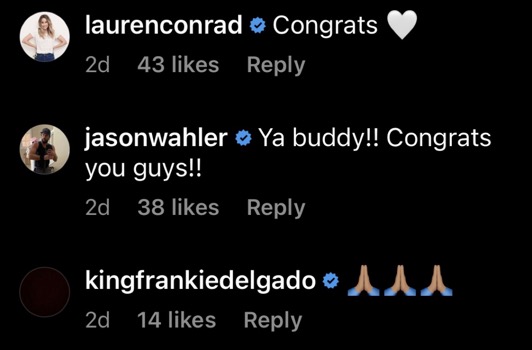 Danielle shared some snapshots with Hudson as well, noting that she and Talan are “already so in love” with their baby girl. Hudson joins big brother Bronson, whom the couple welcomed back in 2017.

Talan and his wife announced in July that they were expecting baby number two and later that month they revealed they were having a baby girl.

Talan recently resurfaced to take part in the very first ‘Laguna Beach’ cast reunion, which took place online last month. The reunion was organized by Lauren, Stephen Colletti, Trey Phillips and Deiter Schmidt as a way to get fans to register to vote.