The Married At First Sight family just got a little bigger!

Season 7 couple Danielle Bergman and Bobby Dodd announced on Tuesday that they welcomed a son on Monday, December 14. Danielle and Bobby— who got hitched the same day they met in 2018— are already parents to 22-month-old daughter Olivia.

The couple told People that they named their son after Bobby– whose full name is Robert Elvin— and he weighed in at 6 lbs., 5 oz. and measured 18.5 inches long.

Although Baby Robert wasn’t due until January, Danielle was induced early due to having HELLP Syndrome, which is a variant of preeclampsia that can be life-threatening. She remains hospitalized. (Danielle was diagnosed with HELLP Syndrome after Olivia’s birth, causing the couple to consider not having any more children.) 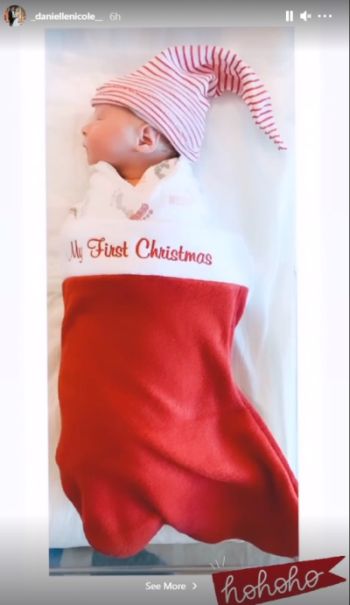 “We are so excited to announce the birth of our baby boy, Robert Elvin Dodd IV,” Danielle told the magazine. “This time around we got the birth story of our dreams, given the circumstances. Because symptoms of HELLP were beginning to set in, we were induced 3 weeks early but were able to have a smooth and peaceful birth. He is a happy and healthy boy and we can’t wait to bring him home to meet his sister.

“Olivia is having a blast at home with her grandparents and has no clue that things are about to change! They are exactly 22 months apart and we cannot wait to watch them grow up together,” she added.

Danielle said that, had she not been induced on Monday, she could have suffered serious consequences.

“[If I were] still pregnant today, I would have gotten very sick, only another day or two,” she told People. “Delivering is the only treatment for HELLP, and since I already did yesterday, my body functions tanked today but should start recovering soon. I hope.”

Bobby and Danielle announced that they were expecting Baby No. 2 during a June episode of the ‘MAFS’ spin-off Couples Cam. After Baby Robert’s birth, both posted photos of him to their Instagram accounts.

“We are so excited to announce that Bobby lV is here!” Danielle captioned her photo. “He is the sweetest baby ever and we are so happy to finally be a family of 4!” (In the comment section of her post, Danielle confirmed that they would call the baby Bobby.)

Bobby and Danielle received plenty of congratulatory messages from their fellow ‘Married At First Sight’ castmates.

“Congrats!! He’s adorable. So happy for you guys!” Ashley Petta— who is also expecting her second child–wrote.

“Huge congratulations to the two (three!) of you on little Bobby IV,” Dr. Jessica Griffin–one of the show’s experts– commented. “He’s beautiful!!! He sure is one lucky boy to have you two as his Mom and Dad. What a wonderful Christmas gift for your family. Rest up, Mama!”