Jed Duggar‘s brother, Josh may be on trial for receiving and possessing child sex abuse materials, but Jed but decided to lighten the mood a bit on Monday by posting cutesy photos from his 2020 engagement to his now-wife Katey…

…and it did not go well.

Jed— who had been named as a potential or confirmed witness for Josh’s trial but did not take the stand–has not made an appearance in the courtroom on Monday, despite many of his siblings attending on Monday and Tuesday. Instead, he posted a series of “throwback” photos of the day in February he proposed to Katey.

“Looking back at our romantic winter proposal on Valentine’s Day!” Jed captioned a series of photos, while also promoting a link in his bio a video.

Unfortunately for Jed, his followers were not amused by his cheery post, with many leaving comments about how insensitive the post was, given what was going on with the Duggar Family on Monday.

(As The Ashley—who has been in Arkansas for the trial– previously reported in her “Live Updates,” Monday was a difficult day in court, as former Duggar family friend Bobye Holt testified in great detail about Josh molesting his sisters back when he was a teenager. Her graphic testimony included descriptions about what Josh said he did to one victim, who was only five.) 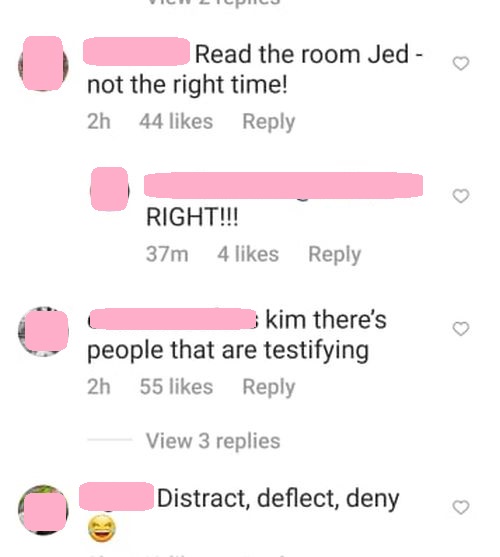 “Read the room Jed- not the right time!” one person commented on the post.

“Distracting much?” another wrote. “Come on, this isn’t time or place. You know your sisters have a serious hard time right now, right? Your brother is in court facing 40 years of jail time. You act here like all if fine, nothing going on. You could also support your sisters…”

“I’m sure your engagement was wonderful, but this seems like deflection or damage control,” someone else wrote.

“I think maybe you should have chosen another time to reveal this…” another person commented. “This will not deflect the world on what is going on with your brothers and your innocent sisters that he hurt.”

“In very poor taste,” someone replied to the comment. “[His dad] Jim Bob [Duggar] probably told him to do this.”

While Jed’s post was flooded with negative comments, he did receive support from one person— his sister, Jill Duggar Dillard, who wrote, “Gorgeous! Love y’all!” in the comment section.

Katey and Jed have yet to make an appearance in the courtroom. So far the following Duggars (or Duggar associates) have appeared in court at least once: Josh’s wife, Anna (who has been there every day); Joy and Austin Forsyth; Jessa Seewald (who appeared briefly on Monday); James Duggar, Jason Duggar, Justin Duggar (who appeared briefly on Thursday with his smiley mother-in-law, Hilary Spivey, in tow); Jill’s husband Derick Dillard (who has been there every day); Jana Duggar (who attended Tuesday); Laura DeMasie (Jana’s best friend and an employee of Jim Bob who came Monday and Tuesday).

Jim Bob himself appeared in court for the first time during the trial. (He was legally obligated to testify during the pre-trial hearing last Monday.)

Jed and Katey— who got married on April 3 and are already expecting their first child— have yet to respond to the critical comments.