From filming embarrassing ads on Facebook to commenting on a feud among former friends, the stars of the Teen Mom franchise (both past and present) have been keeping themselves busy lately! In an effort to keep you up-to-date on the latest Teen Mom OG and Teen Mom 2 news, The Ashley brings you the Teen Mom News Pile.

Resident ‘Teen Mom OG’ party planner Cheyenne Floyd is in full wedding-planning mode and letting her fans in on some of the details set for her and fiancé Zach Davis’ big day.

Earlier this month, Cheyenne gave fans a sneak peek of her save the date on her Instagram Story, confirming the date and location of the ceremony– September 29 in Pasadena, California.

During an Instagram Q&A, Cheyenne went on to reveal some more wedding day details, including the designer of her wedding dress— Galia Lahav. She also told fans that she plans to take her groom’s last name. 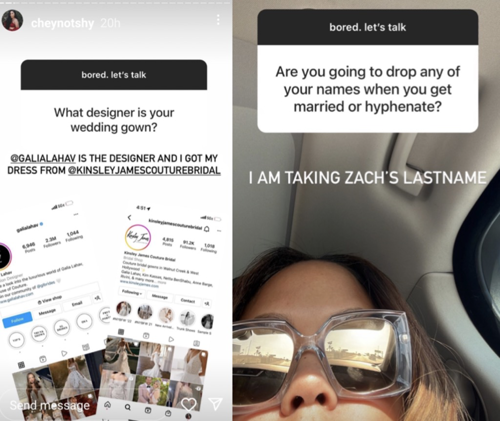 Cheyenne also said some of the ‘Teen Mom’ girls would be receiving invites to the wedding, though she didn’t specify who exactly has made the– “around 300” people– guest list.

The Floyd-Davis wedding will also be attended by some of Cheyenne’s former co-stars from Are You The One? and The Challenge.

While ‘Teen Mom OG’ viewers saw Cheyenne spring for a ball pit at her baby sprinkle for son, Ace, she said the pit will not be making a return for her wedding. In fact, there will be no kids at the wedding at all, except for Cheyenne’s own two children and their godchildren.

“No. This will be [an] adult only wedding,” she wrote. “We only want our children [and] god children.

Briana DeJesus comments on the alleged feud between Kail Lowry and Leah Messer.

A little while back, Kail went on an Instagram unfollowing spree, narrowing her follow list down to the bare minimum (plus Chelsea Houska). At the time, she unfollowed her friend and travel pal, Leah, and fans noticed that Kail never bothered to re-follow Leah. This led to fans speculating that there’s some beef between Kail and Leah. (For the record, Leah is still following Kail as of press time.)

While neither Kail nor Leah have confirmed any sort of falling out, their co-star Briana DeJesus claims she may have contributed to the two no longer being friendly/going on vacations together.

When asked about the alleged feud between her co-stars, Briana said she was told that Leah “liking” one of her Instagram posts set Kail off and ultimately caused the mom of four to hit the “unfollow” button.

“ … Leah liked one of my self growth posts and [Kail] got upset with her,” Briana claimed in a now-deleted tweet. “[Kail] told Leah ‘we don’t need to be friends if she cherishes that friendship more’ but Leah said she’s grown and can be friends with whoever she wants.” 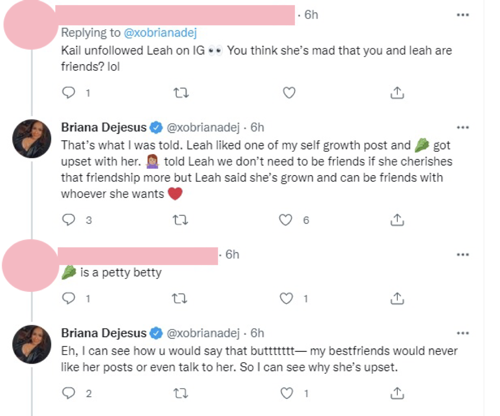 “Eh, I can see how u would say that butttttt– my best friends would never like her posts or even talk to her. So I can see why she’s upset,” Briana replied.

Kail has yet to begin following Leah again, though she does follow a number of other people from the ‘Teen Mom’ franchise, including Briana’s baby daddy Devoin Austin, Catelynn Lowell, Tyler Baltierra, Nessa, Ashley Jones, Dr. Drew and Chelsea.

Jaylan Mobley, newest boo of ‘Teen Mom 2’ star Leah Messer, only recently made his MTV debut, but he’s already capitalizing on the D-list adjacent fame by earning some coin through sponsored ads on social media.

Jaylan recently dropped an ad on Facebook for blue-light glasses, which he promises will save your “sad eyes.”

“Hey you! Are you scrolling through that phone again?” Jaylan asks in the video. “Wanna turn those sad eyes into happy eyes?”

(If you do in fact want to turn those sad eyes into happy eyes, we suggest you not subject yourself to Jaylan’s chock-full-of-cringe video.)

As the video continues, Jaylan– now wearing a suit for no apparent reason– again asks viewers if their eyes are sad, and warns them what can happen after continued eye strain.

Jaylan claims this product is especially great for people heading back to work, proving that his target audience is obviously no-one in the ‘Teen Mom’ franchise.

He further proves this point by recommending the blue-light glasses for avid book readers.

If you want to feast your sad eyes on the cringe-o-rama that is Jaylan’s ad, you can do so below.

Briana DeJesus explains why her last name is ‘Soto’ in legal papers.

News broke this week that Briana prevailed in the lawsuit filed against her by co-star and arch-rival Kail Lowry, with a judge dismissing the case and siding with Bri. However, when the legal papers were made public, they referred to Briana as “Ms. Soto” rather than “Ms. DeJesus,” causing fans to be confused.

In a now-deleted tweet posted earlier this week, Briana explained why she has a different last name legally.

“Well, Soto is my last name (my dad’s last name), DeJesus is my mom’s last name…” Briana wrote. “Legally, I have both last names but I only use DeJesus for social media and  TV, and I use Soto for all other legal stuff (passport etc.)”