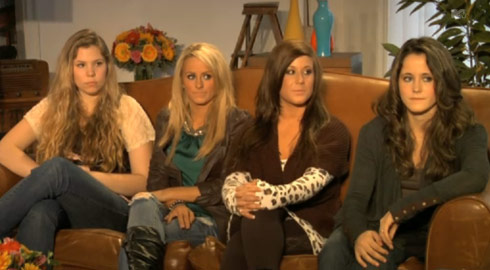 The Ashley seems to be getting asked the same questions about Teen Mom2 and its cast, so she decided to answer all of the most frequently asked questions in one Roundup (on The Roundup).

Remember, if you have any more questions about any reality show (except Jersey Shore because The Ashley just can’t stomach it, sorry), you can always ask The Ashley on Formspring. Try not to be creepy though.

Anyway, a lot of people ask me what the current relationship statuses are for the cast of Teen Mom 2. When The Ashley went to the taping of the Teen Mom 2 reunion (which airs this coming Tuesday) things were a little different than they are now.  Here are the current statuses (as far as The Ashley knows…) as of today.

Kail & Jo: Broken up. They are NOT engaged as it was reported in some creepy magazine. They do seem to be getting along a lot better these days, though.

Kail & Jordan: Still together and happy. (They are also NOT engaged, as Kail confirmed to The Ashley over on the Twitter.)

Chelsea & Adam: Here’s where it gets tricky. Currently, they are not together. However, on Tuesday’s reunion special, they are together. They have broken up since then, as it was filmed in February.

Jenelle & Kieffer: The status of these two creeps changes so frequently that it can’t be determined. They were still seeing each other as March 27th, Jenelle confirmed on her Facebook.

More of your frequent questions:

Is Kail still living with her mother?

No. Kail has cut her mother off since the last episode taped and is currently living in her own apartment. She has been working with an organization that helps single moms to help her with her living expenses (but she is working and is not trying to get a free ride, like many of the show’s ‘fans’ say. She is working and going to school to make her baby’s life better. There’s nothing wrong with that.)

Is Jenelle homeless? Or is she living with Barbara again?

After the tense conversation she had with her mother during the Reunion taping (read about that here) Jenelle said she was moving in with her friend Tori and Tori’s boyfriend. She did, indeed, move in with the couple and another friend. Things went south when Jenelle called the cops on her roommates to report that they were playing loud music and smoking pot and drinking underage. (That’s kind of like the pot calling the kettle black, isn’t it? You can read the whole story here.) So Jenelle is back with Babs and Jace, for the moment.

Is there going to be another season of Teen Mom 2?

Although it hasn’t been officially confirmed, The Ashley is almost certain that, yes, there will be a second season. Not only is it a cash cow for MTV but it has some of the network’s best ratings. Plus, Kail posted a few photos of Baby Isaac that you can clearly see a film crew in the background. (They are current photos).

What about the original girls? Is there going to be another season of “Teen Mom?”

This one is definitely happening. Gary stated on his Twitter that Season 3 will have a  June or July premiere date. Farrah has also talked about the new season.

At the reunion taping, The Ashley asked Leah during a commercial break if they had found out what was wrong with Baby Ali (she was super sweet, just FYI). Leah said that they still didn’t know. I’d assume by now they at least have some idea, however, they have chosen not to disclose it right now, which is fine and totally within their rights. The Ashley’s original thoughts on what was wrong with her have since been proven wrong.

Is Leah pregnant again? What about Chelsea?

No and no! Leah told Dr. Drew that Corey would like to have a little boy SOMEDAY down the road (and stressed that she didn’t want another baby anytime soon). From that, a magazine made a cover story out of it. Go figure. And Chelsea is not pregnant either. All of the “Teen Mom 2” girls told Dr. Drew that they use the IUD for birth control (except Jenelle who said she has the implant.)

Leah apparently was tired of answering this question and posted this on her official Twitter: “Neither Chelsea or I are pregnant!! Dang!!!”

Has The Ashley answered all of your questions? If not, let me know!