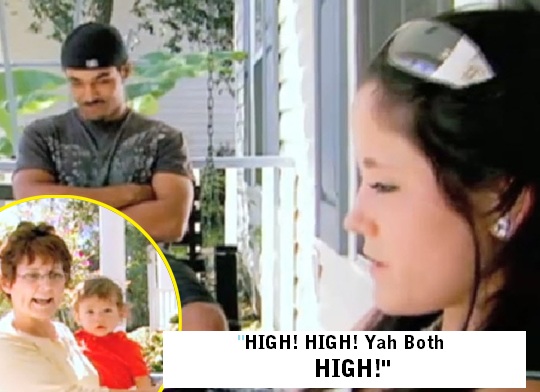 The Ashley does not smoke the ganja (she’s a vodka girl, sorry.) However, she realizes that a lot of people do, and that these people get all wet in the pants when April 20 rolls around (pun intended), because it’s kind of the national stoner holiday.

Since today is “420,” The Ashley brings you this list of reality TV show stars that enjoy the wacky tobaccy more than occasionally.

Who better to top this list than Jenelle and her moocher creepy boyfriend, “Reefer” Kieffer? Their marijuana use inspired one of the best moments of this season of “Teen Mom2,” when Jenelle’s mom (the fabulous Barbara Evans) catches the stoned duo smoking pot on her front porch.  Barbara storms out onto the porch screaming (in her beautiful, creepy accent), “HIGH. HIGH. Yah both high!” Jenelle and Reefer Kieffer frequently discuss pot-smoking on the show. Their overall dedication to the sport of pot-smoking and Kieffer’s constant case of the munchies has earned them the top spot on this list.

We first met Adrienne on ANTM when she won the very first “Top Model” prize. She’s frequently talked (and Twittered) about her support of legalizing marijuana. While on the “Surreal Life,” she met her future husband, former Brady Buncher Christopher Knight which led to the creation of the VH1 the show “My Fair Brady,” which The Ashley watched obsessively. Adrienne used to do a lot of hard drugs back before ANTM, but said in a recent interview that “Top Model” actually helped her turn her life around.  You can read that interview here.

He’s been arrested for possession multiple times, but if you need an explanation of why Flavor Flav is on this list, um, just watch one of his horrible reality shows. (Or the Roast of Flavor Flav, which is actually really hysterical. You can watch it here.)

I love Lil’ John on “Celebrity Apprentice.” He’s so funny on that show that I forget what he’s actually famous for. Even my mother likes him. Anyway, although he’s kind of kept the whole “I (Heart) Marijuana” thing out of his time on the show, he is known for being one of the biggest supporters of the wakey bakey. He wrote a pot anthem, for goodness sakes. (It’s called “The Weedman,” just FYI, if you need an anthem for today.)

Um…Ozzy was high the entire time he filmed “The Osbournes” back in the early 2000s. He even admits it.  If you watched the show, this should come as no surprise! In his earlier career, he wrote the pot anthem “Sweet Leaf.” Watching Ozzy grumble and stumble around today should motivate kids never to do drugs. Remember kids, pot is a “gateway” drug—it leads to other things. Smoke pot and you could eventually end up like Ozzy!

Click here for the story about his run-in with the pot police.