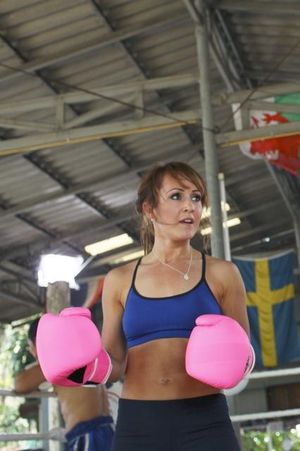 The Ashley started watching this week’s episode of The Bachelorette kind of late (every once in awhile, I actually have a life), so I will only be recapping from the beginning of the boxing scene. My original plan was to go back and watch the first 20 minutes or so that I missed, but honestly, I’d rather pry my own eye out of its socket with an icepick than sit through anymore of this crap.

Apparently, the guys are all training for a big fight. They’re going to beat the crap out of each other (all in good fun, of course) in order to show off their masculinity to all of America and each other. This will not end well for the guys…

The guys all choose different colored boxing gear to prepare for the fight. They line up, looking like a ragtag group of Power Rangers, and look pretty damn scared as they see that over 200 people will be watching them beat the beJesus out of each other.

Ashley tells the guys that she’s nervous. Um…you’re nervous? You’re not the one that has to go brutalize one of your buddies to provide amusement for 200 people.

“I don’t want anyone to get hurt,” she tells the guys.

How about you make them have a chess war instead of making them box, you crapgoblin? Then no one would get hurt. Problem solved.

I’m sure she had the option to nix this entire “date” when the producers suggested it, but was probably wetting herself with excitement over having 10 guys fighting over her. 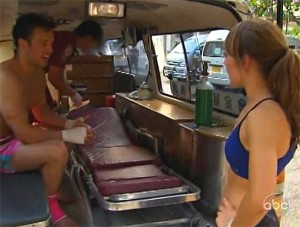 Ryan proceeds to use Ames’ big head as a punching bag. His forehead is swelling (and stretching) by the moment. The other guys go at it, as Ames sits there on the sidelines in a semi-coma. In attempt to prevent Ames’ untimely death, they shuttle him off to a hospital.

That night at the cocktail party, all the guys are feeling woozy after being knocked around. Ashley is acting like she feels so bad for all the guys who got beat up. Um, you caused this.

“I don’t even want to know how it feels to get hit,” she tells one of them.

Ames comes back to the party and is still completely out of it. (Give him some alcohol, that will help!) He’s forgetting things and his cognitive skills are slowly slipping away (as are mine for watching this crappy ass show). A mild concussion pretty much equals an automatic rose, yes?

After various (nauseating) flirting, Lucas brings up the “B” word. Bentley. Why, God, why does he have to get her started on Bentley again?! He says he can tell that Bentley is her type. Why are you giving her more of a reason to bring him up?! Haven’t we viewers suffered enough?

Ashley totally backhands Ames by giving (the concussion-less) Blake the rose. They share a passionate creepy Grandma-esque kiss and that scene is mercifully over.

It’s time for the 2-on-1 date with William and Ben C. (who will now only be known as Bency). The three head out on a raft and the boys are paddling as Ashley sits there like the damn Queen. They arrive at a picnic lunch (naturally) and William is the first to get alone time with Ashley. (Bency goes to lounge/get eaten alive by native bugs by the water.)

William tells Ashley that Bency is over her and basically would rather spend his time prowling Eharmony.com than go on anymore dates with her boring ass. We don’t know if he’s full of crap or not; however, it’s not such a stretch of the imagination to think that some of these guys aren’t into Ashley.  (See: Forced Boxing Date, above).

Ashley decides that she must send Bency home right now, due to what William’s told her.  He tries to explain that he was just kidding. (Besides, he wasn’t dating, he was trolling Twitter trying to find Emily!)

His appeals don’t work and Ashley sends poor Bency on his way, forcing him to be rowed down the river by two Thai men who are laughing at the poor schmuck. And he was never seen again….

William gets to spend the rest of the date alone with Ashley. However, he blows it in the first five minutes of dinner by telling her that he’s basically a 30-year-old kid who just wants to have fun and doesn’t want to settle down. Great going, William. That’s what every woman who’s on a reality TV show about finding a husband wants to hear. She scoots him out the door too.  Ashley is left alone, symbolically burning the rose as the scene fades into black. I wish I had a bus to throw myself in front of.

It’s cocktail party time and all of the guys are sucking up to Ashley so that they don’t get sent home (they want to go to the next exotic location!) Ashley starts to wail about how she misses Bentley, how she knows she needs closure and how she can’t go on without him.

At this point, why didn’t the producers just show Ashley the tapes of Bentley saying all those horrible (but funny) things about her? This was a total dick move on their part to let her go on and on (and on….) about him when they knew he hated her. Plus, if they show her the video we wouldn’t have to hear about that douche nozzle anymore.

Chris Harrison says he’ll see what he can do about getting Bentley back for Ashley. Until then, he says she needs to go weed through all the rest of the schmucks she doesn’t care about and decide which one she wants to kick out.

She hands out the roses until it’s finally down to only Ryan and Nick. Ryan gets the rose and naturally, Nick is devastated. He says it’s hard to say goodbye to love and that he knew that was how things were heading with Ashley.

Yeah, sure, buddy, tell yourself whatever you need to hear in order to prevent yourself from overdosing on cough syrup and vodka, but that chick didn’t even know your name.

Next week, Ashley and the gang head to Hong Kong. Will Ashley finally get a piece of Bentley’s dong in Hong Kong?