Well kids, here’s the good news: The Ashley survived the 95-hour long premiere of the Bachelor Pad 2. The bad news? Part of my brain is still numb from watching this crapfest, so bear with me.

Since there is no way any sane person can recap three hours of this nonsense, The Ashley has chosen to summarize the best (and by ‘best’ I mean worst, obviously) parts of the episode, so there may be some holes.

The episode starts with the introductions of some of the cast (just the good ones, of course. The “fillers” don’t get a special ‘remember me’ montage). First up is Justin, aka “The Wrestler,” aka “Rated R” aka “the guy with the girlfriend” from Ali‘s season of ‘The Bachelorette.’ He’s obviously relishing in the fact that he will fill the ‘Bachelor Pad’ bad boy slot previously occupied by Cowboy Creepcrooner, Wes.

Next up is Jackie (from Womack Part II’s season). She’s hoping that Michelle Money won’t be part of the ‘Pad’ because Jackie told off Michelle during their season’s Women Tell All episode and now she fears for her life because we all know Michelle is bat-sh*t crazy.

Speaking of crazy, obviously Michelle is the next to be introduced. She’s still got the same strange eyebrows she had during Womack Part II.

Gia is the only person that was on Season 1 that has returned for another shot at “love.” (Her relationship with Wes that started during Season 1 didn’t work out because Vienna boned him, apparently.) She tells us that all Vienna cares about is fame and being on TV. Which is obviously so different from Gia’s motives for being on this TV show. Twice.

Next up they wheel out Vienna and Kasey “Guard & Protect Your Heart” Kahl from Ali’s season (glad to see he finally got off that glacier!) He says he is ready to guard and protect Vienna in case her ex-fiance Jake shows up. At least that’s what I think he said; I can’t understand a damn thing that kid says. 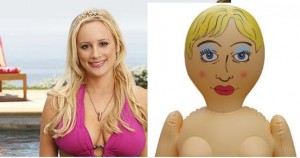 Erica Rose (the girl who thinks she’s a princess) is next to be introduced. She’s basically just a robotic mound of plastic at this point.She kind of looks like a blow-up doll: plastic skin, creepy expression, empty eyes and those big pink plastic lips.

Graham is up next. After DeAnna dumped him, he went off to build wells for African kids and make shoes for homeless people or something. He seems to have a lot of redeeming value; why the hell is he on a crappy show like this?

Ella from Jake’s season is next. I couldn’t pick this chick out of a lineup, although her accent is slightly familiar. She’s come on this show so that she can buy a house for her and her son. She says she’s willing to do absolutely anything to bring home that money. Except work, obviously.

Finally we see Holly‘s intro. If you’ll ‘member, Holly was set to be one quarter of DeAnna Pappas’ double wedding until she freaked out and broke up with Mike, the twin brother of DeAnna’s fiance. Naturally, Mike’s going to be on the show too.

We are only a half hour in and already I can feel my brain starting to decay. The limos start showing up and the ‘Pad’ players start getting out. Here we meet some of the other people who are going to be on the show but weren’t quite worthy of a special introduction, including Dentist Blake and Ames from the most recent ‘Bachelorette,’ (shouldn’t he be off at cooking school in Thailand or something? I’d expect him to be doing something way more cultured than hanging around the ‘Bachelor Pad’ with these half-witts.)

Gia walks in and Vienna’s not too happy to see her. Still, she tries to strike up a conversation with Gia about (what else) herself and Gia verbally bitch slaps her. If one of them doesn’t claw the other’s eyeballs out by the hour mark, I may not make it through this episode.

In walks some other “fillers,” including Alli (how the hell did she get on this show? Someone more exciting must have cancelled last minute). Kirk from Ali’s season and Melissa from Womack Part Ii sneak in and barely anyone even glances up from their champagne. They probably thought Kirk and Melissa were part of craft services and just there to replenish the ice and finger foods or something.

Will “It Was a Roast” Holden from Ashley’s season shows up, but the group could care less; they’re waiting for Jake’s arrival. Finally, Jake arrives and Chris Harrison asks him why he’s here. He says he wants closure from Vienna.

Now that all the ‘Padders’ are settled, they learn that their first challenge will be a couple’s challenge. They all pair up and head outside to find a row of beds with harnesses dangling above them (wow–skipping right to the Fantasy Suite date I see?) All of the couples are going to be straddling each other while they’re suspended over the beds. Seeing Kasey and Vienna in this position literally brings the throw-up right up to my mouth. I may never recover.

Ella says that she’s doing this for her son. Yes, I’m sure your son will be quite proud that his mama missionary-positioned a perfect stranger just for him. Despite the fact that all of the couples put up a good fight to hold on to their lady friends, it eventually comes down to Jake versus Vienna.

Although he’s trying very hard to hold Vienna, Kasey has to finally let go, due to concerns over his “pelvic area” and Jake and Jackie are declared the winners. They get to go on a super-fancy LA date, be safe from elimination and have the opportunity to present a third rose and save someone else.

After discussing it with Jackie, Jake decides he wants to save Vienna as a peace offering. (I’m sure the producers had nothing to do with this decision whatsoever…) He gives her the rose and then asks her and Kasey to come talk to him. Jake apologizes and is feeling really good about himself. Vienna is fake-devastated by the display and takes Kasey out into the hall and randomly tells him that “I’m going to marry you and have your babies.” Then we have to watch her strip off her bikini and hop into bed with Kasey. OMFG. Make it stop.

Let’s move this right along to the rose ceremony thingy, shall we? Everyone’s scrambling to make sure that they’re not the ones going home. This is the first time I remember that there are other people in the house besides Kasey, Jake and Vienna.We have barely heard from anyone else, despite the fact that this creep-isode is 92 hours long!

In the end, it’s Justin and Alli who are voted off first, mostly because they were “playing both sides.” Ho-hum.

This premiere episode was torture to sit through. Next week must produce a physical altercation of some sort or I’m not going to make it through the season!