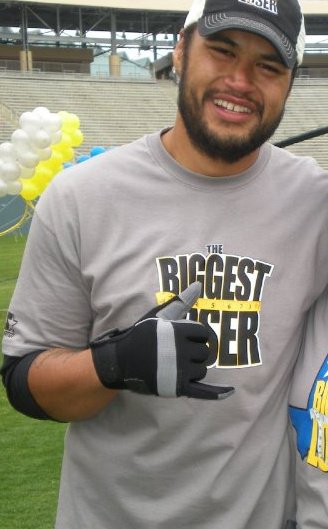 A Rounduper recently informed The Ashley of some very sad news. One of her favorite Biggest Loser alums, Sam Poueu, was critically injured this weekend in an accident. Although the details are not all clear at this point, it has been reported that he suffered a very bad fall and has injuries to his skull. Sam is currently in the intensive care unit.

‘Biggest Loser’ fans fell in love with Sam and his cousin Koli during the show’s ninth season as the two tried to set a positive influence for the Tongan community. You may remember that Sam later fell in love with fellow contestant Stephanie Anderson and the couple got engaged in 2010.

The Ashley sends her best wishes to Sam and will keep you guys updated if she gets any news on his recovery.

Update (Sunday 9/4/11: Sam is making improvements, according to his cousin Koli, who shared the following with Facebook friends:

“Sam Poueu has made serious improvement in the last few hours. He has become very responsive to Stephanie Anderson and his Mother, squeezing their hands and kicking his feet. The head trauma has pretty much stabilized. He still has a long way to go but thank you so much for your love and prayers.”

Update 9/8/11: According to E! Online, Sam  suffered a pelvic injury, torn ligaments, a punctured lung, and a broken leg during the accident. According to The Ashley’s sources, he may have also suffered injury to his skull, although she hears that he does not have brain damage.

A lot of people are making up crazy rumors about what happened, so The Ashley will say that, according to her sources, Sam fell several stories off of a fire escape. However, this is not 100% confirmed.

Update 9/12/11: Sam’s fiance and family have given an interview with People magazine. You can read it here. The Ashley’s information was correct; he did fall off of a fire escape.

The Ashley will update again when she hears more!