As The Ashley previously reported, Biggest Loser alum Sam Poueu suffered a very bad fall and is currently in critical condition at a San Francisco hospital.

Although Sam is making progress every day, according to his friends and family, he is still in a fight for his life. According to a recent update from Sam’s future mother-in-law was posted on the “Pray for Sam” Facebook page:

“Every day is a better day! Sam is making significant improvements every single day. It is so wonderful to actually witness God’s miracles … from the absolute skills his doctors have to the strength & determination Sam has to recover. What a gift to us hearing Sam say I love you.”

She also added that Sam had surgery on September 9 and it appears to have been a success! 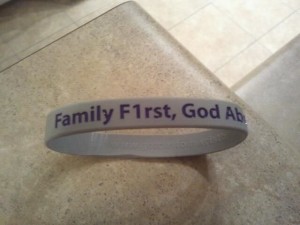 To help with some of Sam’s numerous medical bills, fans and friends have begun a fundraiser. They are selling wristbands in support of Sam that feature his favorite quote: “Family F1rst, God Above All.” They are gray (in honor of Sam’s ‘Biggest Loser’ team color) with purple lettering (in honor of his fiance Stephanie’s ‘Biggest Loser’ team color!)