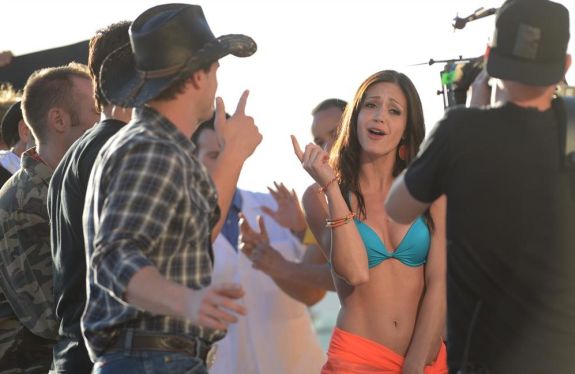 Welcome back to Bachelorette Land, kids! This week the show sunk to a new low (if that’s even possible) when Desiree and the guys shoot a rap video with Soulja Boy (Tell ‘Em?) But before we can get to that horrorfest, Chris Harrison checks in with the guys, who have just moved into the Mansion. Chris explains that Desiree will be going on two 1-on-1 dates, as well as one group date. The first 1-on-1 goes to Brooks. (Does anyone else think this guy looks like Joey Lawrence, circa 1994?! Whooa! If you’re too young to get that reference…I’m jealous of you.)

Anyway, Des arrives to pick Brooks up in her baby blue Bentley and they head out onto the highway. Des’ hair is blowing all over in the convertible, but Brooks’ coif is greased within an inch of its life and isn’t moving at all. Des excitedly tells Brooks that their first stop is a wedding boutique (!) where they will get to try on wedding clothes. Brooks pretends to be all excited about this, but, seriously, unless he gets to change in the same dressing room as Desiree, no guy would like this date.

He’s a good sport, first trying on a green tuxedo, then a Miami Vice look, and finally changes into a slick black tux. THUD! What was that, you ask? Oh, yes…Desiree’s panties hitting the floor. She was basically drooling.

They decide to steal the wedding attire (as you do) and hope into Des’ car to go get their “wedding cake” at a cupcake truck. (This is LA, we have this kind of nonsense here.) Of course, Desiree is immediately recognized by the assortment of cougars that are hovering around the cupcake truck. After making their escape, they head up a winding road where they get to go up to the Hollywood sign!

Compared to getting mauled by Sean last season, kissing Brooks must have been a dream come true for Des.

Next they head up to a “closed” road, but, you know, Des is a former street urchin, so she’s all about breaking the rules. She gets all Ronald Reagan on Brooks, telling him to “Tear down this wall…of do not enter signs.” Brooks is scared of getting in trouble. Um…didn’t he watch Bachelor Pad? Deserted, closed bridge at night…empty tummies…we all know where this is going– it’s the dinner on the bridge date!

Hundreds of poor schmucks had to reroute their evening commute because these knuckleheads wanted to eat dinner on the bridge.

Anyway, while at dinner, Des tells Brooks how great (but poor) her parents are, and then forces him to talk about his personal family problems on national TV. He’s reluctant but eventually reveals that his parents’ divorce helped him not take anything for granted, and informs us that he has “daddy issues.” Swell.

Of course, Des loves it all and presents Brooks with the date rose. Suddenly we hear music in the far distance. They both seem to have “no clue” what could be happening down there. We creepy ‘Bachelorette’ fans watching at home know exactly what’s happening. After all, it is the second date, so it’s basically required that they are treated to a private concert by some band that no one’s heard of.

Apparently it’s some guy named Andy singing. I have no clue who he is (but, then again, I’m not cool. At all.) Desiree and Brooks seem to love him, though, and celebrate their night by busting out some horrible white-people dance moves. Eventually, the bad dancing turns into a weird slow-dance-makeout sort of thing. The song playing is “I Choose You.” If she chooses Brooks, expect to hear this playing in the montage after he proposes!

The next day is the group date. I’m tempted to just skip this part all together, but I guess I have to address this whole rap video thing. Desiree arrives, having spent the morning literally pouring herself into a tight purple dress. She tells the guys that they will be making a rap video with “superstar” rapper Soulja Boy! He comes out and takes a look at the yokels he’ll be working with and asks a few of them to bust a rhyme.

From that trainwreck, Soulja Boy chooses a few guys to “star” in the video, regulating the rest of the guys to be backup dancers. They head to “wardrobe,” where Brandon is selected to wear a tank top and nut-hugging undies. Ben, on the other hand is chosen to be the cowboy of the group and films a scene in which he is portraying “Love Don’t Come Easy” country superstar Wes Hayden. Next it’s…um, some other guy who’s name I didn’t get, dressed up and mocking Justin “Rated R” Rego.

After that, things just get weird. Two guys dress up like Jason Mesnick and his son, and then Brandon swings his junk into Des’ leg during his scene. While I did think it was mildly amusing that the guys were making fun of past ‘Bachelorette’ contestants, the whole thing is just humiliating, for them, for Desiree, and for me, for actually devoting two hours to watching this monstrosity.

After the video shoot, Des takes the guys to a hotel pool for drinks. She tells the guys that she’s determined to find a guy that’s here for the “right reasons” and Zak W. decides to pull her aside. Formerly known as “Ab Boy,” Zak decides to show Des that he isn’t all pecs and prostates by giving her an antique journal. She’s touched by the gift, and is near tears as Zak describes that some guy once gave it to his daughter.

Soon, Ben comes over to steal Des away, which pisses a lot of the guys off. They are suspecting that Ben’s not there for…wait for it…the right reasons. During his alone time with Des, Ben starts playing the kid card again and she’s loving it. She tells him that she’s totally cool with “the kid’s menu” and then they begin making out. The cameras then pan to Brandon, who’s creeping alone in the dark behind them, watching. Nope, nothing odd about that!

Michael G. insists that he, too is here for the “right reasons” (groan), and to prove it, he assures Desiree that if he thinks any of these schmucks are here for the wrong reasons, he will be sure to tattle on them.

Next, Brandon comes down from the shadows and gets a few minutes alone with Desiree. (Hopefully the producers checked his pockets for duct tape and/or anything that could be used as a weapon because this guy has ‘creepy’ written all over him!) He quickly busts out his childhood story–everything from his cracked out mom to how he had to raise his siblings. He also makes mention that he’s “fallen in like” with Desiree already and, although it seems to make Des swoon, she ends up giving the date rose to smarmy Ben, much to the other guys’ dismay.

They break into one more cringe-worthy verse of “Right Reasons” and, mercifully, the date ends.

If you are really masochistic and want to watch the entire “Right Reasons” rap video, click here.

Back at the Mansion, the four guys who managed to escape going on that atrocity of a group date are anxiously awaiting the arrival of the final 1-on-1 date card. When it finally arrives, Bryden finds out that he gets the date, which Des has simply called a “Road Trip.” Um, hopefully the first stop on their road trip is the salon so that they can get Bryden’s man-bangs taken care of.

The next day, Desiree picks Bryden up for their date. Before they are barely out of the driveway, Desiree manages to work in the fact that her family was too poor to ever fly on an airplane so she’s used to driving everywhere on vacation. They head up the coast to the beach where they try to fly a kite and play in the waves, “Notebook”-style. (“If you’re a bird, I’m a bird….”)

Next they drive up to Ojai for dinner.

Dinner conversation quickly turns depressing when Bryden reveals that he was in a bad car accident in college…and he just happens to have an assortment of photos showing his injuries in his suit pocket! (What, you don’t carry around pictures of you with horrific facial injuries when you go on dates?!) The gruesome pics seem to seal the deal, and Desiree gives Bryden the rose. They finish things off in the hot tub, where it gets totally awkward when Bryden has to be scolded by Des for not having the balls to kiss her.

The next night is the rose ceremony and all of the guys, except Ben, Bryden and Brooks (who have roses), are nervous. Desiree arrives wearing yet another silver sparkly dress that looks like it came off The Supremes’ wardrobe rack, and is immediately swept away by Michael G. He decides to tell Desiree that he suffers from Type 1 diabetes. That’s good, bro, but you’re going to have to do a lot better if you want your sob story to compete with Brandon’s cracked out mom and Bryden’s car accident.

Anyway, douche-a-saurus Ben decides to creep in and steal Desiree away, despite the fact that poor Michael is busy pouring out his heart to her. I blame Desiree for this, actually. She should have told Ben to take a hike and come back in a few minutes. Instead, she takes off with Ben, leaving poor Michael halfway through his diabetes diagnosis story.

Ben’s actions have angered the men, so a few of them pull him aside to let him know they all think he’s a creep-nozzle. Ben could care less, and insists that he’s here for the…wait for it…right reasons. All the guys huddle together to talk crap on Ben, while Brian gets some alone time with Des. I honestly don’t remember ever seeing this guy on the show. Is he new? No, seriously, is he?

Poor Brian must be nervous because he’s sweating up a storm while talking to Desiree. Seriously, I can’t focus on anything he’s saying because his freaking forehead looks like Niagara Falls right now. However, he seems like a nice, normal guy, which means he’ll probably get cut soon.

Finally it’s time to hand out some flowers. She doles out roses to James, Juan Pablo, Jesse, Dan, Brad, Chris, Brian (Yay!) Zak W. (formerly known as “Ab Boy”) and Jared. (I think they’re sneaking guys in, honestly. Maybe they just came in for the free booze, because I’ve never seen this one before either.)

The last rose goes to Brandon, which sends home Will, Robert (the sign-spinning guy who calls his experience on the show an “absolute nightmare), Nick M.and some other guy.

The remaining guys cheers to being there for the “right reasons” (Will it never end?!)

Next week, Brandon gets creepier, Ben gets slimier and someone’s girlfriend gets a chance to make a fool of her cheating boyfriend on national TV! You know The Ashley will be all over this episode!