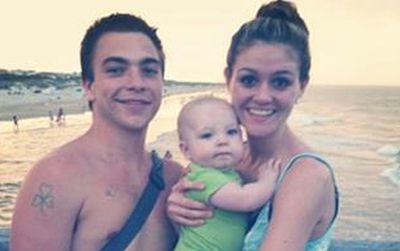 The latest episode of 16 and Pregnant starred Georgia girl Summer Rewis, who gave birth to her son, Peyton in October. Summer’s episode was one of the most popular of the season (so far!) but it left many fans with several questions. In an exclusive interview with The Ashley, Summer did her best to set the record straight on a few of the episode’s biggest moments and, of course, that crib!

(For those of you who have been asking, The Ashley will be doing a recap of Summer’s episode. She apologizes for skipping Arianna‘s episode. The recaps will be back this weekend!)

Although her episode has aired, Summer’s work with MTV is not finished yet. As The Ashley previously told you, Summer will be heading to New York City next weekend to take part in the ’16 and Pregnant’ Season 5 reunion taping.

Summer said that she is happy she decided to participate in the show.

“I don’t regret doing it,” she told The Ashley. “It was for a good cause. And every one has different opinions, some good some bad. I think my episode was perfect. Right on point on everything that goes on in my life. There wasn’t anything at all left out that I can see.”

Anyway, on with the questions….

First things first: What was the deal with that crib?! Did Summer end up using it?

“I sold that crib!” Summer said. “My baby was not sleeping in a roach-infested crib!”

Why was Summer filmed by MTV giving birth but the other girls were not?

As The Ashley told you in her book, Teen Mom Confidential, in the past MTV has had one hell of a time getting clearance to film the ’16 and Pregnant’ births. (The show’s producers have even tried to pretend that they were family members of the girl to get themselves into the birthing room!) According to Summer, the hospital she gave birth in made it easy for MTV to film.

“You have to have permission from the hospital for then to film,” she said. “Some hospitals won’t let you.”

When the hospital won’t approve the filming, we are forced to settle for one of those cartoon scenes of a girl squeezing out a baby.

How is Summer’s relationship with her mother now? How is her mom doing?

Unfortunately, it doesn’t appear that much has changed in regard to Summer’s strained relationship with her mom. Her mother did not end up going to jail.

“She ended up being on probation, and didn’t have to do any time,” Summer said. “We’re pretty much the same as before. I see her every now and then but that’s about it.”

Why did MTV call DJ her boyfriend, even though Summer and DJ were married when the episode was filmed?

Even Summer has no idea why MTV decided to do that!

“It was weird they called him my boyfriend,” she said. “They didn’t film our wedding. We married a month before they [started filming] so we were married the whole time. We got married in August and Peyton was born in October.”

Is Summer divorcing DJ because she found out he cheated on her?

While Summer does admit that DJ did cheat, she said she is not ready to seek a divorce.

“We’re better,” she said of the current state of their marriage. “He made a mistake, and we’re trying to move forward. Hopefully everything will be okay. We think so.”

Would Summer agree to appear on ‘Teen Mom 4’ if asked?

Although we have no reason to believe (at this point) that MTV will be putting together a ‘Teen Mom 4,’ Summer said she is open to doing the show, should she get an offer.

“If I got asked I would more than likely say yes,” she said.