Just a week after Jenelle Evans posted a sponsored video of herself praising items from clothing company PatPat, the brand has decided to cut ties with the Teen Mom 2 star.

According to Starcasm, PatPat announced last Friday it was ending its partnership with Jenelle due to backlash and criticism it received from fans of the brand.

Thanks to all our fans for reaching out to us. Our collaboration with Jenelle is going to be stopped from now on.

“Thanks to all our fans for reaching out to us,” the brand tweeted Friday. “Our collaboration with Jenelle is going to be stopped from now on.”

Upon hearing the news that she was getting the boot from the collaboration deal, Jenelle fired back with a social media post accusing PatPat of being a “cheap a*s company that doesn’t pay their promoters.”

Jenelle (of course) didn’t stop there, though. She went on to post a video of a PatPat label to show her followers the item was made by Korean brand Moonoo.

“All they do is flip clothes,” she said. “Doesn’t even say ‘PatPat.’ Made in Korea… not America.”

As some may recall, PatPat isn’t the first company that’s been pressured into ending a partnership deal with Jenelle. As The Ashley previously reported, Jenelle’s less-than-stellar reputation cost her a paying gig with meal-prep service Blue Apron earlier this year.

After the comment section of Jenelle’s robotic brand endorsement became riddled with people claiming they would no longer use Blue Apron due to its association with Jenelle, the company soon announced they were severing ties.

“Thanks for reaching out. We will no longer be advertising with Jenelle,” the company tweeted in February.

Similar to Jenelle’s reaction to PatPat’s announcement, her husband, David Eason, went after Blue Apron to throw some shade after news broke that the company would no longer be shipping food (or paychecks) to The Land.

“@blueapron All these Fake accounts talking about Jenelle and you really take it that seriously? Now we see where your priorities are. Simple math- there are more followers than haters…. keep your cheep food and ill keep shopping at The Pig @MyrtleBeachPig @pigglywiggly.”

Jenelle may be down, but she’s not out. She continues to cash in on lucrative promoting gigs, including a longtime one with the ever-reputable Flat Tummy Co. The MTV star was hawking the totally-legit-and-not-at-all-a-scam weight loss tea as recent as last month.

UPDATE! On Tuesday, Jenelle posted a message to her Instagram stories that seems to be in response to this story. 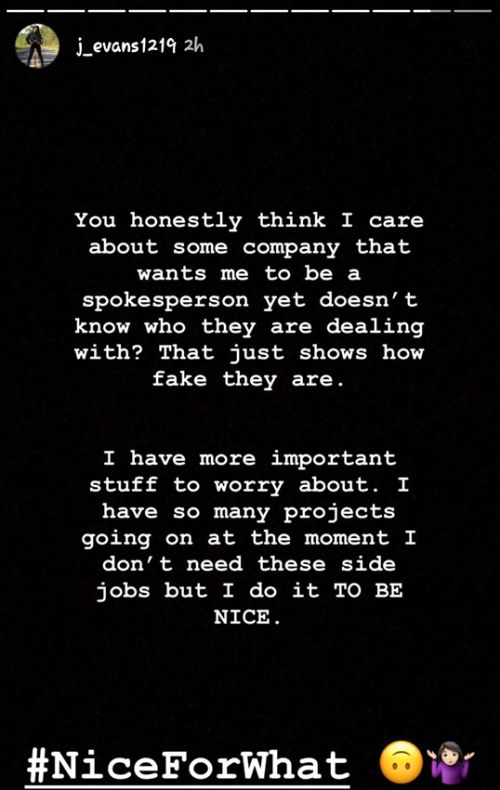