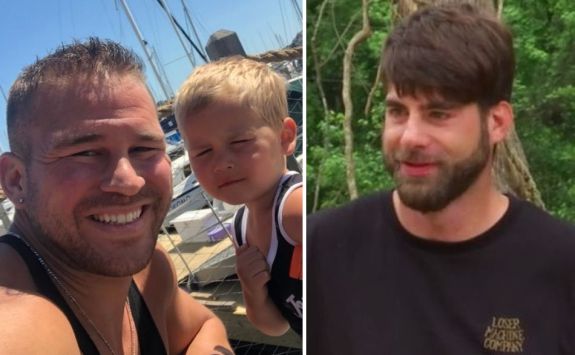 Nathan Griffith took drastic measures on Tuesday to show Teen Mom 2 fans what he says is the extent of the abuse his son Kaiser allegedly suffered at the hands of David Eason.

Nathan posted a series of graphic photos of his son’s bare behind, in which large marks are clearly visible. Nathan– who shares Kaiser with his ex Jenelle Evans— claimed in the tweets that Kaiser obtained the injuries after he was hit by a stick. Nathan’s girlfriend, Ashley Lanhardt, tweeted that Kaiser told her and Nathan that David was the one who allegedly hit him with a stick.

(As The Ashley previously reported, Jenelle and David claimed that Kaiser obtained the marks after playing on a water slide. The incident, which occurred last summer, was covered on the Season 9 premiere of ‘Teen Mom 2’ last night.)

“Cut the truth! No one, no magazine and no sponsor wants to publish this because of guidelines. Bruise? Or bruises? Water slide right?” Nathan captioned the photos. “My son told me that he got hit by a stick. Recently, David broke his cell phone with a hammer? ‘Kaiser said’”

(The Ashley is not posting the photos here, but you can see them on Nathan’s Twitter timeline.)

“Y would a 4YO lie and say ‘David hit me with a stick,'” Ashley tweeted. “Then go outside and pick up a stick that looked like the one he was hit with. He was not coached. We had no idea that was the extent. I yelled for Nathan, nate said ‘what happen to your butt buddy?’ Kaiser gave his response.”

Nathan also called out MTV for not doing anything about the alleged abuse of his son.

“@MTV please stop playing an innocent bystander,” Nathan wrote. “Editing is hell. This is my son. My pride and joy. Tons of unedited pill bottles, alcohol bottle, neglect, and indecent conversations are film around children. It shows nothing but greed. People love resolutions and a happy ending.”

@MTV please stop playing an innocent bystander. Editing is hell. This is my son. My pride and joy. Tons of unedited pill bottles, alcohol bottle, neglect, and indecent conversations are film around children. It shows nothing but greed. People love resolutions and a happy ending.

When ‘Teen Mom 2’ fans responded by telling Nathan to go to the police, Nathan assured them that he has done this.

“I have! Besides Horry County [in South Carolina], no one in [North Carolina] takes this serious!” Nathan wrote.

Ashley backed up Nathan’s claims that they have tried to get the police, as well as Child Protective Services, involved.

“We went to the police station immediately after we found [the bruises],” Ashley wrote. “They have the pictures as well as CPS, everyone is dropping the ball.”

When @j_evans1219 runs into issues with Nathan, her and Barbara finally find some common ground. #TeenMom2 returns tonight at 9/8c on @MTV! 💖

After the bruises were discovered last summer, Nathan and his mother, Doris Davidson, refused to return Kaiser to Jenelle and David’s care, which resulted in a several-days-long standoff involving the police and CPS. Eventually, Jenelle and David came to Doris’ South Carolina home with police escorts, and the child was turned back over to Jenelle.

In July, The Ashley broke the news that Nathan had filed for full custody of Kaiser, demanding that David be kept away from the boy.

On the Season 9 premiere, Nathan talked to a friend about the incident.

“I am afraid for [Kaiser’s] welfare. I feel that he’s in danger,” Nathan said, later adding, “I don’t want David anywhere around him. I don’t feel safe with my son around him. He has a violent criminal record.”

“Bro I’d for sure be in f**king jail at this point,” Jeremy replied to Nathan’s tweet with the photos.

“I’m just curious how bad it has to get before someone steps in and puts a end to a lot of bulls**t the kids see and go through,” Jeremy wrote.

Nathan explained why he has tried to go through the legal system instead of getting violent with David.

“I have constantly contemplated several options but none of those besides the legal system will get me Kaiser,” Nathan wrote.

Jenelle seemed to be responding to Nathan’s tweets in an Instagram Story posted Tuesday afternoon.

“Acting like a father and being a father are two separate things,” she wrote. “Some fathers never think about their child’s future. At least there is another father figure that my son loves and looks up to whether anyone likes it or not. And that man cares about that little boy just as much.”

According to a tweet posted by Ashley, Jenelle threatened to cut off Nathan’s contact with Kaiser due to the tweeted photos.

“Because the truth is in the pictures, now there are threats that we will no longer be seeing kaiser,” Ashley wrote. “That’s the response what we get for lifting the veil and exposing the truth. You’re not hurting us, only Kaiser because he adores his dad and knows he’s safe.”

The Ashley will update this story if more information becomes available…