Ronald Smith and Tiffany Franco seemed like one of the happier couples from the 90 Day Fiance Franchise…until Tuesday, that is.

The couple— who starred on “The Other Way” last year— shocked their fans by announcing that they are splitting up….and that adultery may be the reason for the divorce!

Only a week ago Ronald— who hails from South Africa— was gushing about Tiffany, her son from a previous relationship and Carley, his infant daughter with Tiffany, on his Instagram account. On Tuesday, though, he blasted a different message via Instagram Stories, informing his fans that he and Tiffany are divorcing. He stated that it was his choice to break up, and hinted that Tiffany may have cheated on him!

“Here with sorry to inform you all that I have decided to leave Tiffany due to certain reasons,” Ronald wrote. “Thank you for following our story but unfortunately it just didn’t work for me. I’ll be [filing] for the divorce in [South Africa] since she isn’t even registered in the USA as married. Talk about adultery.” 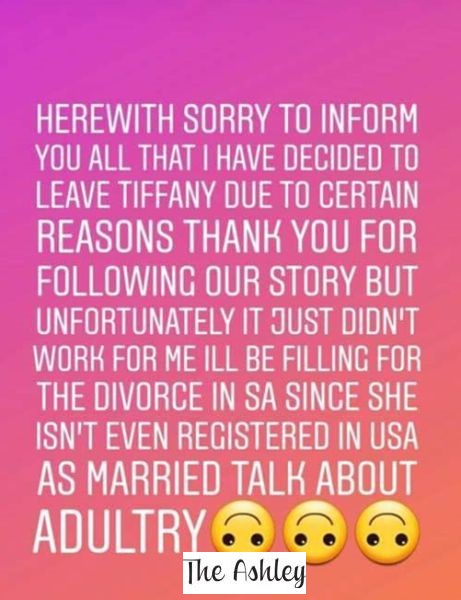 After Ronald posted his message, Tiffany also informed her followers of the split.

“Unfortunately I have to announce that Ronald and I will be separating,” Tiffany posted on Instagram Stories. “I wanted to be the first to let you know rather than hiding it and putting on a facade for social media. Thank you guys for following our story. We really love each other but some things are just irreparable. We both deserve much better than what we can offer at the moment. -Lots of love from us.” 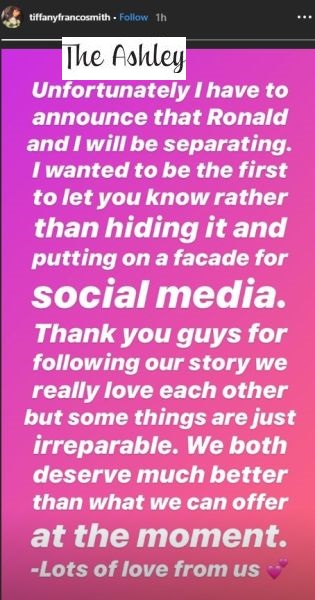 In a follow-up message posted less than an hour after the first one, Tiffany’s tone seemed to have changed and she denied ever cheating on Ronald.

“When a toxic person can no longer manipulate you they will try to manipulate the way others see you. Truer words have never been spoken. I wish nothing but good things for Ronald but I won’t waste one more second being taken for granted and being unhappy,” Tiffany wrote. 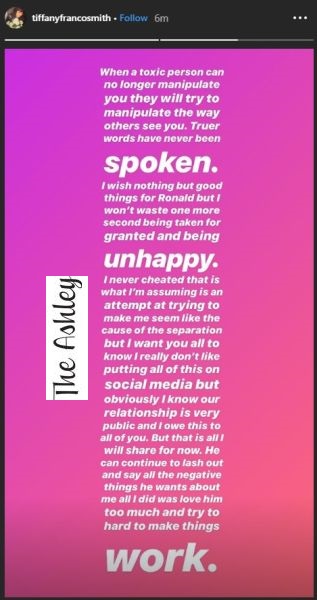 “I never cheated that is what I’m assuming is an attempt at trying to make me seem like the cause of the separation,” she continued. “But I want you all to know I really don’t like putting all of this on social media but obviously I know our relationship is very public and I owe this to all of you. But that is all I will share for now. He can continue to lash out and say all the negative things he wants about me. All I did was love him too much and try to[o] hard to make things work.”

Ronald and Tiffany have been married since October 2018. In August of last year, they welcomed baby Carley.

UPDATE! After this story was posted, Ronald posted some more messages about the split to Instagram Stories (only to delete them soon after).

“I have done nothing but good to Tiffany the last year she wants answers I answer, she wants reports, I report, she wants location I show location,” he wrote. “I mean it’s crazy, still I was accused of lying. She agreed to me taking her personally somewhere where she wanted answers yet wasn’t good enough for her. She’s very controlling, bossy, didn’t really love me.

“I was a pet to her caged up because if I wanted to go somewhere I’m not allowed. I loved her dearly and always will. She’s the mother of my kids and respect her for that but this was just tooo much. We could have sorted this privately but she wanted it to go viral, why? Seeking attention or what but it’s whatever. I might deactivate my IG and FB because [I] won’t entertain all of this anymore. She got what she wanted. She has my kids that I was told I won’t…”