Farrah Abraham is once again being called out for animal abuse after a video posted to her dogs’ Instagram page and her TikTok account showed one of her dogs with its mouth tied shut with a ribbon.

Cupcake– who is currently dyed pink— was shown in multiple clips posted to the “Boo and Cupcake” Instagram page, (which is run by the former Teen Mom OG star herself) walking around with a red ribbon on its muzzle. Naturally, this outraged people, who accused Farrah of mistreating the dog, and leaving it without the ability to eat, drink or make noise.

Party hats 🥳 & p.s for those who do not know what dog training muzzles are go to your nearest pet store and learn more and why they can be helpful in training.💯

Upon seeing Cupcake– who is a Zuchon— being subjected to such cruel treatment, followers began voicing their concerns in the comment section, resulting in Farrah eventually turning the comment feature off for the post.

One follower suggested that Farrah “get a stuffed animal or something” instead of having a live dog, while another added that Farrah “shouldn’t be responsible for the welfare [of] anyone or anything.” 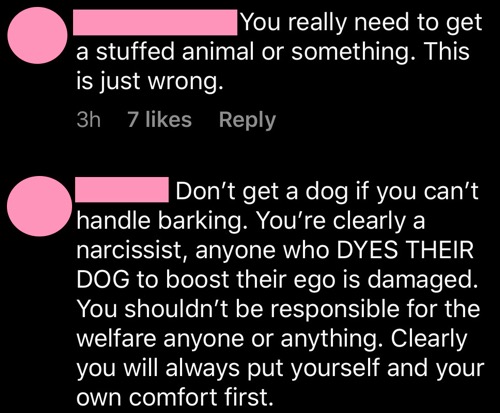 Some suspected that Cupcake got her mouth tied shut because she was either barking too much or licking herself too much.

“Is cupcake’s mouth tied shut in the other video, because she barks too much or because she’s licking herself (from dyeing her),” another comment read, suggesting the fur dye may have irritated the dog’s skin.

“If it’s because she’s allergic & licking herself put a cone [on] her until it’s washed out…. don’t tie her mouth shut FOR ANY REASON.” 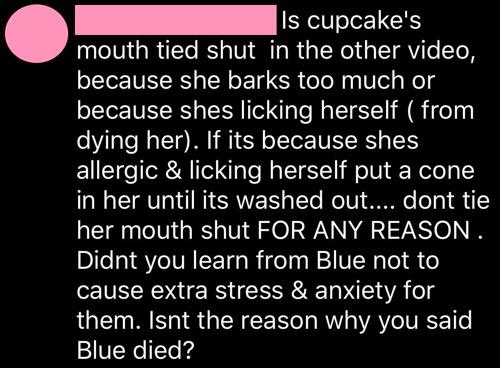 The concerned commenter then brought up the fact that in 2018, Blue— another dog in Farrah’s care— died. Blue died under mysterious circumstances, but Farrah’s daughter Sophia admitted on social media that she had thrown the small dog.

“I was getting Blue to go outside and my only choice was to toss him outside,” Sophia, then nine, said in 2018. “And then I did, but then he went into shock and 30 seconds later he passed with no heartbeat.”

Farrah later denied any wrongdoing on Sophia’s part and instead, said Blue passed away as a result of stress from the construction going on in their building. Farrah and Sophia filmed themselves crying over the dead dog, and then had Blue stuffed. 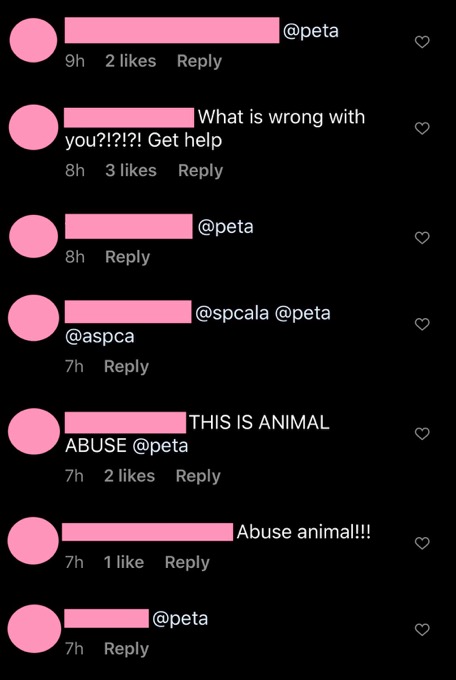 In response to the concern for Cupcake and Boo, Stephanie Bell, PETA Senior Director of Cruelty Casework confirmed to The Sun that Farrah was definitely in the wrong for her actions, and that tying a dog’s mouth shut with a ribbon could kill the dog.

“Subjecting dogs to the stress of being dyed—which is also potentially toxic—and restricting their opportunities to eat, drink and even breathe by tying a ribbon around their mouth are cruel acts that can have fatal consequences and they show a profound lack of empathy.

“PETA urges Farrah Abraham to start treating dogs like more than fashion accessories or surrender them to someone who will love them unconditionally,” she continued.

In response, Farrah said she was using the ribbon as “a muzzle” because it was recommended by her trainer and that the contraption is “sold at all pet stores.”

(Apparently, in the Brain of Farrah, a ratty hair ribbon is the same as a store-bought muzzle?)

To back her claims, Farrah has since edited the caption of the video in question.

“ … & p.s. for those who do not know what dog training muzzles are go to your nearest pet store and learn more and why they can be helpful in training,” she wrote. 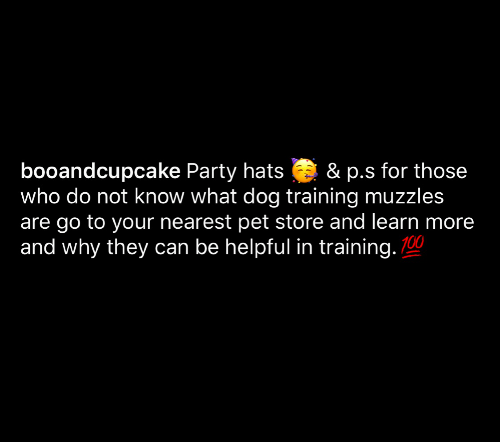 The AKC goes on to say that muzzles are NOT to be used to “fix” behavior problems, such as barking or chewing, nor should they be used to punish your dog or to force your dog into a stressful situation.

As for Farrah’s decision to go with a homemade muzzle, the AKC says this should only be done “when there are no other options available” and should be a temporary thing. The “soft-muzzle” style in which Cupcake’s “muzzle” was worn in the video is actually “potentially more dangerous” than standard basket muzzles, according to the AKC, as they “prevent your dog from panting, which is the only way he has of dispersing heat.”

“Panting is the canine version of sweating so these muzzles should only be used for very short periods of time and never in hot weather,” the site reads. “These muzzles also prevent your dog from barking, drinking or eating.”

Farrah told The Sun that her family has been receiving death threats over the Cupcake video and she called the harassment “unnecessary and awful.”

“Sophia treats [the dogs] as sister and brother… like royalty,” she added. “We do have emotional support animals and they must be trained to the guidelines of the law.”

While Farrah claims to focusing on the “guidelines of the law” animal cruelty itself is unlawful and in some cases, may lead to an arrest. In 2017, a South Carolina man was sentenced to five years in prison for taping his dog’s mouth shut to stop her barking, according to WGN9 Chicago; and in 2015, a woman was arrested in North Carolina after posting a photo of her dog online with its mouth taped shut, Alabama.com reports.

In the meantime, Farrah plans to do a little policing of her own in the form of blocking her haters on social media.

“It’s been ridiculous to see other people fabricate lies and animal abuse allegations when we treat our pets better than others treat their own children,” she told Champion Daily on Monday. “Haters and liars will be blocked and reported we do not tolerate hate, violence or bullying of any kind.”

This is not the first time Farrah has been accused of abusing her dogs. In July 2018, Farrah’s former friend Phoebe Price made several dog-related accusations against the Backdoor Teen Mom, alleging that Farrah punished her dogs for barking and neglected to give her dogs water when she brought them to the Coachella festival that spring, in addition to other scary claims.

“At Coachella, I had to water and walk these dogs because Farrah left them in a basket, not to run around,” Phoebe said on her Instagram account. “How would you like to be trapped in a basket for three days?! These dogs were starving for attention! When they barked, she squirted water in their face. Who does that?!”

Farrah denied that there was any truth to Phoebe’s claims.

In a photo posted to the dogs’ Instagram account on Monday night, Cupcake is shown with the ribbon removed from her muzzle, but with her fur still dyed hot pink. Many angry followers used the post’s comment section to slam Farrah’s explanation about why she used the ribbon as a muzzle.

“If you knew ANYTHING about dog training, you’d know the absolute LAST thing you do to train a dog to stop barking is putting a muzzle on it,” one person wrote. “I have been training dogs for over 9 yrs now and can tell you 10000% that is NOT what a dog muzzle is for. Just bc they sell muzzles doesn’t mean you get to strap them on your dog and leave it on all day bc you’re tired of hearing it bark (probably to get exercise and get a good walk in for bathroom! Or underlying anxiety issues you need to work on, not tie the dogs mouth shut).”