In today’s edition of Reasons Why You Probably Shouldn’t Marry A Complete Stranger On Reality TV, we bring you Mindy Shiben and Zach Justice, one of the couples from Married at First Sight Season 10.

The couple ultimately decided to go their separate ways after struggling to adjust to life as a married couple—and after Mindy discovered Zach had been secretly communicating with one of her bridesmaids behind her back. However, they appeared to be on good terms when they came to their mutual decision.

However, on Thursday, Mindy took to Instagram to let the show’s fans know that all is not well with her and her soon-to-be-ex-husband. She accused Zach of holding up the divorce process by ignoring her attempts at communication. Eventually, Zach responded via social media and it was not pretty!

“Hey [Zach]! Will you divorce me? Yes? No? Circle one,” Mindy captioned a photo from the couple’s wedding, along with a few snarky hashtags. “#thisgirlwantsadivorce #checkyourtexts #crickets.” 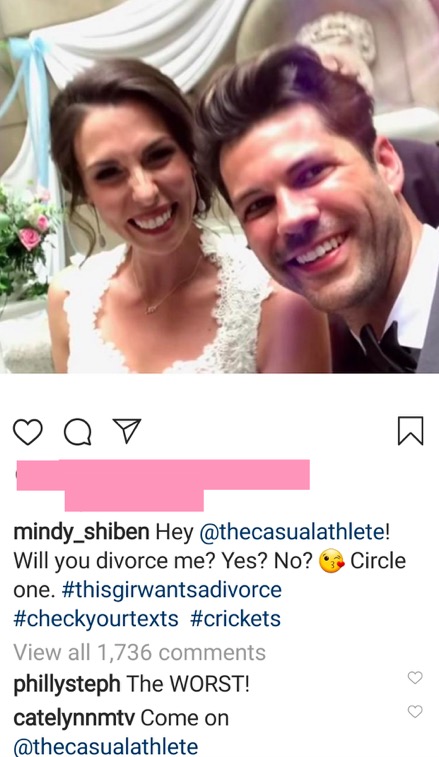 Mindy got some support in the comments from fellow ‘MAFS’ Season 10 alum Jessica Studer, who noted this was a “classic Zach move.” Stephanie Sersen of Season 8, who met her husband, AJ Vollmoeller, on the show, called Mindy’s future ex-husband “The WORST,” while Catelynn Lowell of Teen Mom OG tagged Zach, encouraging him to “come on.”

Fans were shocked to learn that Mindy and Zach had yet to sever ties, legally speaking, though Mindy assured them she’s “been trying.” In a bit of discouraging news, former Season 8 star Jasmine McGriff hopped into post’s comment section to let Mindy know she’s “just getting divorced two years later” after splitting from her made-for-TV husband Will Guess. 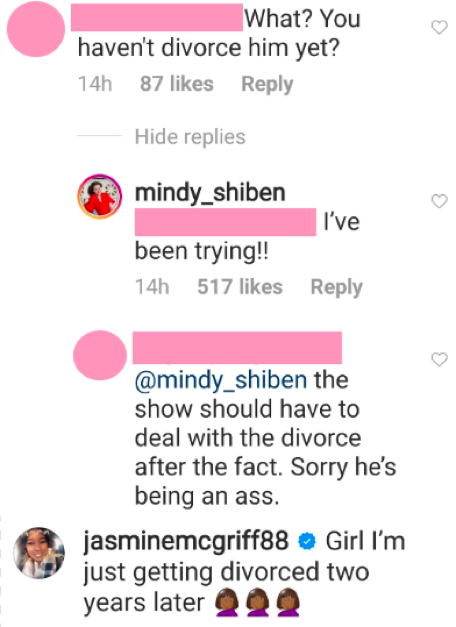 At the point, Zach himself decided to enter the chat, long enough to deny Mindy’s claims and accuse her of attention (and IWI— Instagramming While Intoxicated). He insinuated that he has yet to receive any sort of legal paperwork in regard to Mindy’s alleged attempts at getting a divorce. 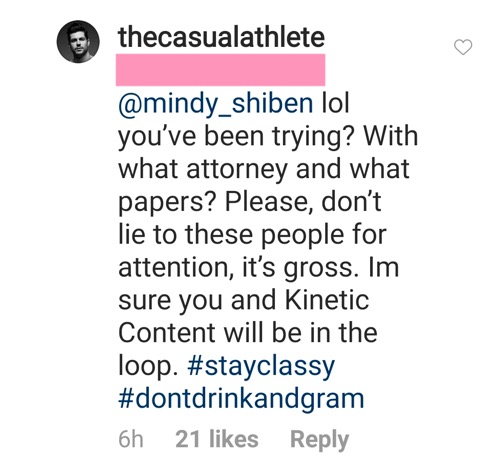 “[Mindy] lol you’ve been trying,” he wrote. “With what attorney and what papers? Please, don’t lie to these people for attention, it’s gross. I’m sure you and [MAFS production company] Kinetic Content will be in the loop. #stayclassy #dontdrinkandgram.”

Mindy replied to Zach, thanking him, albeit sarcastically, for having “finally replied to something.” 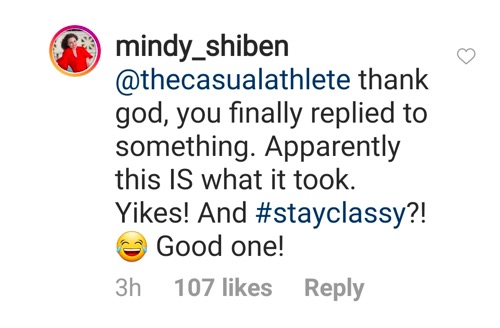 “Apparently this IS what it took,” she added. “Yikes! And #stayclassy? Good one!”

When asked why the ‘MAFS’ divorce process is often prolonged, Jasmine told one of Mindy’s followers the cast has to wait until the show has aired before they are allowed to file, which is “usually almost a year later.” Mindy added that Zach had been “awol with communicating about the process” until their exchange over Instagram. 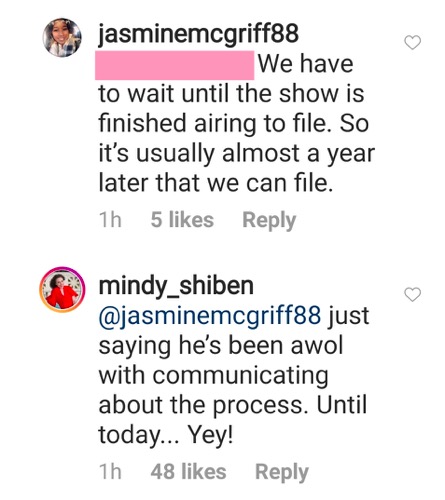 Season 9’s Amber Bowles then jumped into the conversation, stating that Mindy’s situation is a lot like what she experienced with her own ‘MAFS’ husband.

For those of you jonesing for more ‘MAFS’ drama, you’re in luck! Season 11 premieres July 15 at 8 p.m. on Lifetime, with a MAFS: Matchmaking Special and a MAFS: Kick-Off Special to premiere the week prior, on July 8, at 8 p.m. and 9 p.m., respectively.