Former Unexpected couple Chloe Mendoza and Max Schenzel are no longer together and apparently, no where close to being on good terms.

Chloe previously filed an order of protection against her baby daddy following his second domestic assault arrest and she has reportedly moved on to a new relationship. According to Starcasm, Max hasn’t taken the news too well and it recently lead to a public feud among the pair.

In an Instagram Story, Max accused his ex of keeping him from their daughter Ava and making up stories about him. Max claimed he’s been sober for six months, while Chloe has “been drinking and smoking weed.” He also slammed his baby mama for still living with her parents.

When asked in a DM about the comments Max had made about her, Chloe told @TLCUnexpected that Max has not been sober and “did drugs May 8th.”

“He honestly just saw I moved on and decided to throw a tantrum with lies on Instagram,” she said during the conversation, adding that the last time Max saw Ava was about six months ago “when he kicked her down.”

Happy Birthday to my baby girl! I am so lucky to have Ava, she amazes me every single day. She is 2 now and she is so so smart, kind, caring, and funny! I love how her personality now shines through and how she teaches me more than I ever thought I could learn about life. I love you forever Ava Grace 💛

After a commenter on Instagram came to Max’s defense, Chloe’s mom Jessica joined the conversation, alleging that Max broke Ava’s crib and destroyed a TV in front of her. She said the family wasn’t “putting all of the reports out there because who gives a s**t who believes us.”

After hearing about Chloe and Jessica’s comments, Max unleashed some all-caps responses to his Instagram Story, again accusing Chloe of drinking, smoking weed and “who knows what else.” 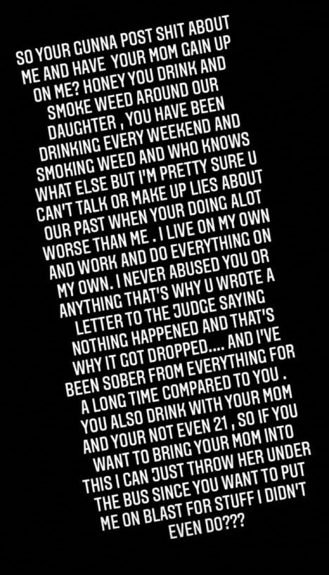 “ … I live on my own and work and do everything on my own,” he continued. “I never abused you or anything that’s why u wrote a letter to the judge saying nothing happened and that’s why it got dropped…. And I’ve been sober from everything for a long time compared to you. You also drink with your mom and you’re not even 21, so if you want to bring your mom into this I can just throw her under the bus since you want to put me on blast for stuff I didn’t even do???”

Max went on to shift his anger at Jessica, telling her to “get a life” and “stop living in a teenage world.” 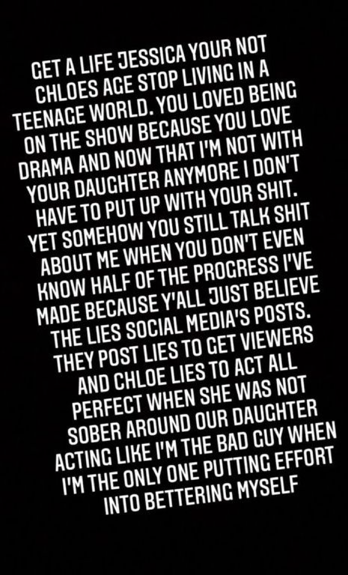 “ … You loved being on the show because you love drama and now that I’m not with your daughter anymore I don’t have to put up with your s**t,” he continued. “Yet somehow you still talk s**t about me when you don’t even know half of the progress I’ve made because y’all just believe the lies social media posts.”

During his rant, Max accused Chloe of violating the order of protection by messaging him, to which Chloe fired back with photos of the crib Max allegedly busted.

Since Max wants to continue to lie and say he never broke TVs or Avas crib (swipe to see the damage he did) and Chloe sent me the domestic violence report she filed against Max. End of discussion

Max responded with a photo of broken sliding glass doors at his dad’s house that he claims Chloe destroyed when she was drunk. 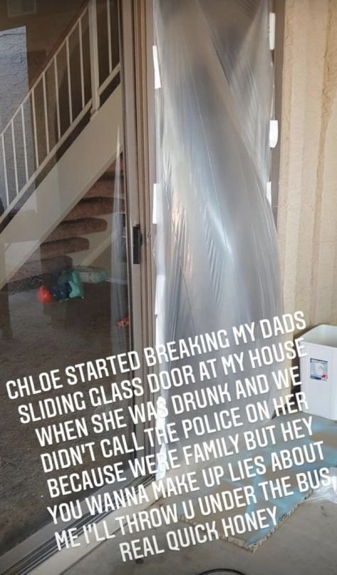 Chloe disputed the sliding glass door story, saying the glass broke when she threw a stuffed toy out of anger after Max took her car to go buy drugs.

Following the back and forth, Chloe took to YouTube with a video entitled, “Everything Max did to me with proof.” In the video, Chloe said Max physically assaulted her on multiple occasions and threatened to do so many other times.

“Every time we would get in fights … I would flinch, like, he’d be yelling at me and I would flinch … I’d have my hand up and he would say, ‘Don’t act like I’m going to hit you, because that actually makes me want to hit you more,’” she revealed. “That’s what he would tell me.”

Chloe also said that Max admitted to “kicking Ava in the back,” which is why she was able to include Ava in her restraining order. She also went into detail about the sliding glass door she broke, revealing that she paid to have it repaired.

As for why she chose to stay with Max despite the abuse, Chloe said she didn’t know, but insisted she is “not a liar” and refuses to be victim blamed.

RELATED STORY: Former ‘Unexpected’ Star Tylor Strawmyer Reveals He’s Been in a Mental Healthcare Facility for the Past Week Seeking Treatment for “Severe Depression and Anxiety”