Chloe Trautman will no longer appear on Siesta Key; however, the MTV starlet insists the decision to leave the show was her own.

Chloe— who has been a main cast member since the showed premiered in 2017— took to Instagram to reveal why she was missing from photos shared on social media of a recent cast trip to Palm Island. After fans saw that she was the only cast member missing from the trip, some began to wonder if she had been fired from the show.

(Last year, Chloe’s castmate Alex Kompothecras was booted from the show over racist, sexist and offensive things he posted to social media in the past.)

She decided to put the rumors to rest, insisting she was not fired. Instead, she said, she chose to leave the show due to the toxicity surrounding it.

“I can not stand to see these lies spread anymore. I was not fired,” she wrote. “I decided to take a step back from filming because it became extremely toxic. I am unwilling to put my journey and my happiness on the line for fame and money.” 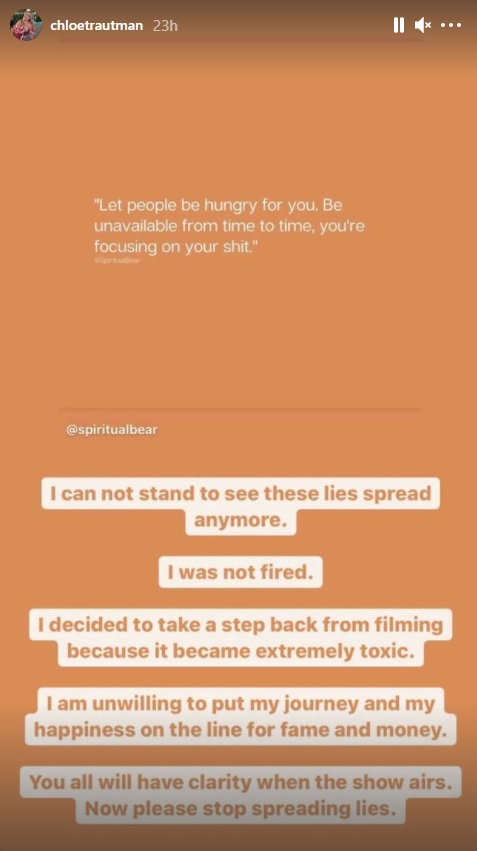 She then let fans know that her exit will play out in future episodes of ‘Siesta Key.’

“You all will have clarity when the show airs. Now please stop spreading lies,” Chloe wrote.

The cast starting filming for Season 4 in late November, after moving production to a private resort in order to take precautions against COVID-19. On November 24, Chloe expressed how happy she was to begin production on the new season so that the show’s fans can see how much she’s changed.

“I’m so grateful to of started filming Season 4 of @siestakey! I can’t wait for all of you to see the journey I’m on. I hope I make you all proud and if I inspire a few of you along the way -that would just be the cherry on top,” she wrote on Instagram.

On Sunday, Chloe posted a quote to Instagram that many assumed was about her exit from ‘Siesta Key.’

“Giving up is quitting something you love because of external feedback. Evolving is choosing something else because your energy has moved.”