Maci Bookout came out swinging on Twitter on Friday night, adding her two cents to the ongoing feud between her and her husband Taylor McKinney, and Ryan Edwards‘ family.

The Teen Mom OG star called out Ryan’s wife Mackenzie for not taking to opportunity to go face-to-face with her at the recently filmed ‘Teen Mom OG’ Season 9 Reunion. (As The Ashley exclusively told you earlier this week, Mackenzie and Ryan refused to film a segment on-stage with Maci and Taylor; however, Ryan’s parents Jen and Larry did film with Maci and Taylor, and things went badly.)

Maci’s clapback at Mackenzie came after a fan tagged her (as well as The Ashley) on Twitter, posting a screenshot of a comment Mack made on Instagram about her treatment of Maci and Ryan’s son, Bentley.

On the most-recent episode of ‘Teen Mom OG’ Bentley told Maci that there was “like no interaction” between him and Ryan at his brother Jagger’s birthday party. When someone brought this up to Mackenzie on Instagram (on a post from October 2020 showing Bentley at the party), she denied that’s how things went down.

“The fact that you really posted this picture knowing that y’all didn’t even speak to Bentley the whole time he was there is sad,” the person wrote.

“The fact you honestly believe that is very sad,” Mackenzie responded. 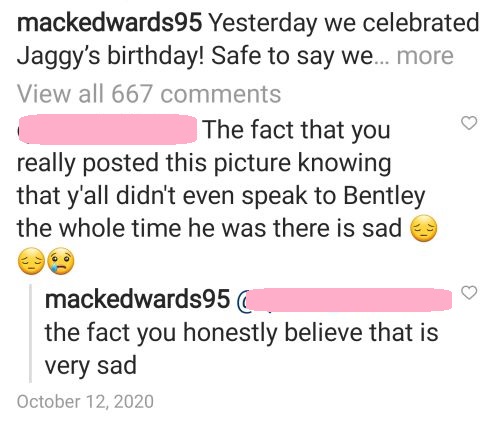 “I guess she’s calling Bentley a liar?” someone else responded.

Once Maci got wind of that, the claws came out, and she used them to write a scathing tweet about Mackenzie.

Mackenzie is brave sitting on a couch responding to strangers on social media about my son, but still not brave enough to sit on a couch and talk to me at the reunion. https://t.co/Qxq5Sfd5sq

“Mackenzie is brave sitting on a couch responding to strangers on social media about my son, but still not brave enough to sit on a couch and talk to me at the reunion,” Maci wrote.

As The Ashley previously told you, Maci and Taylor’s meeting with Jen and Larry on-stage at the Reunion taping ended with Maci and Taylor storming off the set, but not before Taylor confronted Larry and Maci called Jen a “manipulative bitch.” When Taylor was asked about what happened, he basically confirmed that things did play out how The Ashley reported it, and that he didn’t regret it.

Mackenzie and Ryan have yet to respond to Maci and Taylor’s latest statements.