Former Teen Mom OG star (and reigning queen of cringe) Farrah Abraham is being accused of cultural appropriation after posting a photo this week for Eid al-Fitr, a religious holiday celebrated by Muslims.

Farrah— who is not Muslim— went on to add “#muslim #middleeast #arab” to her caption and also tagged number of networks and magazines in the post, including MTV Lebanon, MTV India, Vogue Arabia, Harper’s Bazaar Arabia, ELLE Arabia and Marie Claire Arabia.

Shortly after she posted the photo, Farrah began receiving negative comments from individuals calling her out for being “disrespectful” and accusing her of cultural appropriation and using the Muslim holiday for attention.

“You are not Muslim our religion is not a performance for you,” one person commented.

“Wow this is next level,” another wrote. “So [you’re] posing as a Muslim during Ramadan to get followers?” 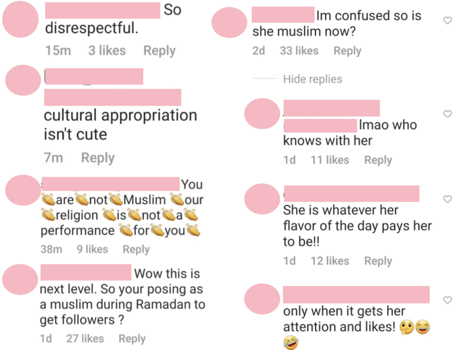 “So you’re claiming to be Muslim this week? Cool,” another wrote.

“It seems she tries to be anything that is relevant at the moment because we all know she never actually is,” someone else wrote.

“When tf did you become Muslim? I swear you just look for reasons to take pictures of yourself,” another comment reads.

Farrah has never mentioned that she follows or practices Islam. In the past, she has made a point to let people know that she is a Christian. She even once spoke about religion when talking about her plans to write a Christian parenting book.

“I have to say faith is a big part of my life,” Farrah told Starcasm in 2014. “I’m not perfect, I think that’s just life. There’s really no perfect Christian. I go to church as often as possible and I have great Christian friends – and those aren’t the ones who say they’re Christian and then act like other…

“My parents didn’t really help me get any closer to God, it was my own choice and I just see a lot of good things happening and I only want good things for everybody else,” she added.

Farrah is one-quarter Syrian on her dad Michael Abraham‘s side; however neither Farrah nor Michael are Muslim. (In a 2014 interview with Starcasm, she clarified her ethnicity as being “Syrian and Italian on my dad’s side and on my mom’s it’s Sicilian and Danish.” In the same interview she declared to be a Christian.)

In addition to her ill-received Instagram post, Farrah also tagged the Middle East Eye in a recent Twitter post… though the tweet itself is written in complete and total Farrah Speak, so it’s nearly impossible to figure out what she was trying to say.

So odd when we see cultural races that have been on surveys, included in business etc for decades yet they say their barely seen and then they limit Muslim woman on giving birth🔥 try being #middleeastern #china mental illness should really be spoken about more @MiddleEastEye pic.twitter.com/m8pcvv5frb

“So odd when we see cultural races that have been on surveys, included in business etc for decades yet they say their barely seen and then they limit Muslim woman on giving birth try being #middleeastern #china mental illness should really be spoken about more,” she wrote.

Even The Ashley, who is a certified “Farrah Speak” translator, is having a hard time deciphering this cornucopia of words. However, Farrah also retweeted a story from The New York Times regarding how Muslim women in China are being forced to have fewer babies, so it’s likely that Farrah’s word salad tweet was about that topic.

It appears that Farrah started becoming interested in Middle Eastern culture back in March. On March 23, she encouraged her Twitter followers to “Embrace Your Middle East.”

Connecting the #middleeast join the list and see everything you need in a moment – embrace your middle east 👏☀️https://t.co/3vrm8ZmPpg