Things in the Beaver Dam are not pleasant at the moment.

Teen Mom: Young and Pregnant star Rachel Beaver absolutely unleased on some members of her family this week, taking to Instagram Live to rip her mother, stepdad and grandmother for being filthy, toxic and allegedly abusive.

During her long rant, Rachel claimed that her mother and stepdad live in a dirty house; that her grandmother allegedly beat her while she was living with her when she was younger; and that Rachel’s mom, Stephanie Polo, allegedly subjects Rachel and her young daughter Hazelee to endless screaming and verbal abuse.

Rachel also addressed “RoachGate”— which is what The Ashley called the period of time after Rachel posted a video to social media a few years ago, showing baby Hazelee opening a Christmas present that contained a live roach. The roach was seen scampering away in the video.

The Ashley has recapped some of the most-interesting quotes from Rachel’s rant. The Beaver battle reportedly began after Rachel posted to social media that she was looking for a place to rent for her and Hazelee, as she wanted to move out of Stephanie’s home. Steph caught wind of Rachel complaining about her home and reportedly unleashed on Rachel and kicked her out, leading Rachel to make the Live video and spill the tea on her family.

She is no longer living at Stephanie’s house, she confirmed.

Let’s get on with the Beaver Bunch Blowout, shall we?

On what goes on at Steph’s house, according to Rachel:

Rachel got some hate for shouting about her mother within earshot of her daughter Hazelee. However, Rachel defended her actions by saying Hazelee is used to hearing screaming, since it happens all the time at Casa de Steph.

My mom is being toxic…There’s people straight up attacking me for saying that my mom’s household is toxic whenever it is. I can screamed in my face every night to get out so am I not supposed to be angry right now?” Rachel said. “Quit attacking an innocent girl that you really don’t know about.

“My daughter hears shouting every day that she’s at my mom’s house because my mom screams in her face for me to get out. Trust me, this ain’t nothing compared to what Mom puts her through.”

On why she behaves the way she does:

Rachel— who is 19, by the way— insists that her bad behavior is the fault of two things: her mental health issues and the way her mother and grandmother raised her.

“I understand you guys say, ‘We’ve seen the show; we’ve seen how toxic you are. We see how you talk to you mom.’ Yes, but do you guys not realize it’s because how I was raised,” Rachel said. “Children that are raised good and properly do not talk to their parents like that. They don’t act like that.”

Rachel then talked about her own mental health issues.

“I have behavior issues. I’m bipolar,” she said. “I’m diagnosed with that. Because of the fact that everything I’ve been put through as a child. Y’all don’t know. Why do you think I moved back in with my mom? You guys don’t think there’s a reason for that? It most definitely wasn’t my mom moving back here and getting custody of me. It’s because my Nana was very, very abusive.

“It should always be blamed on the parent because I didn’t raise myself,” she continued. “I did not raise myself to act like this.”

Rachel said that she moved in with Stephanie when she was 14, after living with her Nana for most of her life. Rachel claims that Steph enticed her to move in with her by claiming it would be a ‘big party’ over at the Beaver Dam.

“The promise that my mom made to me whenever I moved in was, ‘Hey if you move in with me, it’s going to be a big party.’ That’s why I wanted to move in to begin with,” Rachel said. “It’s because I was being beat by my grandmother and I wanted to move in to party. My mom promised that to me and I thought it was all fun and games. And then that turned into toxic too.”

On why she feels she got pregnant as a teen:

Rachel gave birth to Hazelee when she was 17, something she talked about in her Instagram rant. Rachel claimed that her mother didn’t care if she and her then-boyfriend Drew had sex. In fact, according to Rachel, she encouraged them to spend the night together.

“I moved in with [my mom] at 14, I moved out at 15, got pregnant at 16. I lived with [my baby daddy] Drew for a whole year as a minor,” she said. “I lived with my boyfriend for a year, and my mom never cared. She knew we were having sex, she never tried to prevent nothing. She didn’t care.

“She knew we were having sex, she never tried to prevent nothing. She didn’t care,” Rachel continued. “It doesn’t make sense. She blames everything on me, but she was allowing it and encouraging it. She loved Drew. She would be like, ‘Hey you guys should come spend the night here.’ It was not me saying ‘I’m going to do it anyway.’ I didn’t even have to ask.”

On her relationship with her mother:

Rachel made it clear that she was raised for the majority of her childhood by her grandmother, claiming Stephanie wasn’t around (because she was allegedly doing drugs, in prison, or whatnot).

“What people don’t realize is I only saw my mother once a year my whole life until I was 14,” Rachel said. “I went to Georgia to visit my mother one time a year. She would not call me for five months straight, whenever I was like eight, nine and 10 years old. My mom would be in prison, never called me for months straight. She didn’t give two s**ts about me.

“The only reason she moved up here is because she was being abused by her ex, she was on drugs, and then I told her that Nana was beating me so that’s whenever she decided to straighten up her life…her kids were being beat,” Rachel claimed. “If we weren’t she would have never gotten off drugs and tried for us. If she hadn’t have seen my Nana put hands on me, she would have never tried for me.”

Rachel then claimed that the first night she was living in Stephanie’s home, Steph allegedly celebrated by giving Rachel alcohol.

“You’d think that whenever your mom first gets her child back and she’s been wanting that her whole life, supposedly, to get her child back, that she wouldn’t get you drunk the first night you move in at 14 years old,” Rachel said. “Period. I said what the f**k I said. And y’all heard me right. Who moves in their 14-year-old daughter after not ever seeing them and gets them drunk because it’s ‘one big party.’ This is why I turned out this why.”

Rachel spent a good portion of her Live video talking about the cleanliness (or lack thereof) of Stephanie’s house.

“She screams over me saying, ‘Hey, your house smells. Can we please clean it?’ I’ll clean my bathroom and the living room and that’s where I’m staying right now,” Rachel said. “But she won’t clean her room, the bathroom, the kitchen…get up off your ass and pick up your garbage!

Rachel said that her mother is not the only member of the Beaver Bunch who is OK with a mess.

“And it’s not just her, it’s my stepdad too. He has his own room in the house, and I can’t even walk to my bathroom without smelling straight piss to the face, because he’s never washed his sheets a day in his life that he’s lived there,” Rachel said.

Rachel said she decided to seek out another place to live after becoming fed up with Steph’s alleged dirtiness (and love of stink-covering products).

“That’s why I made the post on my Snapchat last night,” she said. “I walked into my mom’s last night and I said, ‘Mom, can we please clean your house? How are you living like this?’ And she literally screams at me in my face to spray some Febreeze! Really? Spray some Febreeze? No, get up and clean!”

On the infamous “RoachGate” video:

When someone asked about the infamous “Roach Present” video from a few years ago, Rachel said she was ready to “out” the truth.

At the time of “RoachGate,” Rachel brushed off the roach (no pun intended), making it seem like it was no big deal that there was a roach in her kid’s present.

“Honestly didn’t know there was a f**king roach in the present or it would’ve been dead,” Rachel wrote at the time on Instagram. “The tree is right next to my front door and it’s been very hot in TN this last week. Quit acting like y’all ain’t ever seen a damn roach. Y’all act like I put it in there.” 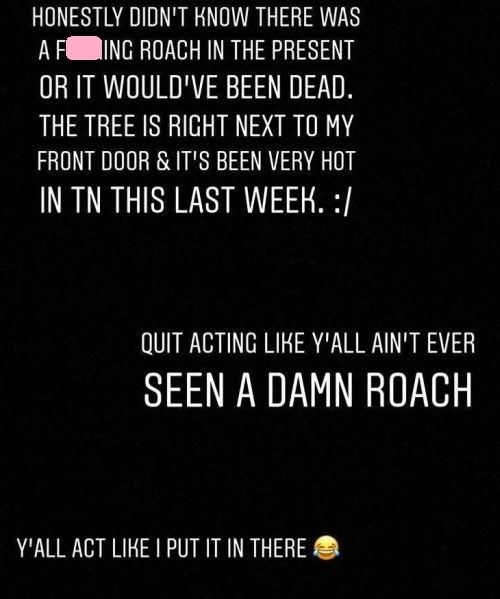 Rachel then claimed that Stephanie blames her for the roach colony that has set up residence in the Beaver home.

“My mom had the audacity last night when I was telling her, ‘Can we please clean? It’s nasty, there’s roaches..’ She said ‘The only reasons we have these problems is because of you. You brought the roaches, you brought the filth,'” Rachel said. “How did I bring that as a child?”

Rachel, Stephanie (and assumingly the roaches) will all be back on our TV screens when the third season of ‘Teen Mom: Young & Pregnant’ premieres this summer. (The Ashley hears its premiere is still slated for August, but that can change at any time.)