Another Married at First Sight couple has called it quits!

According to Soap Dirt, Erik Lake and Virginia Coombs of Season 12 are officially divorced after living apart for months – despite Virginia recently claiming that the two were still together. And, for some reason, their former co-star Chris Williams has a lot to say about their split!

In a post shared on Erik’s birthday, Virginia said the two decided a few weeks prior to take their relationship offline because “social media can be very toxic.”

“ … We did a very public experiment and appreciate all the support but are currently enjoying some privacy,” she said, right before news of the couple’s divorce was made public. “Please be respectful of that and remember to always be kind.”

In the documents obtained by Soap Dirt, it appears that neither Erik nor Virginia will have to pay any money to part ways. The two went with Erik’s lawyer; Virginia signed a waiver acknowledging it was Erik’s lawyer and that she should seek her own legal counsel. Still, she chose to represent herself, while Erik’s attorney handled all of the paperwork.

Some ‘MAFS’ fans reportedly believe Erik and Virginia kept the details of their split a secret until recently due to their commitment to Couples Cam. However, their divorce was set to be finalized Wednesday, as they filed June 29. According to their divorce record, the two have been living separately since April.

This was Erik’s second marriage.

Upon hearing the news of Erik and Virginia’s split, Season 12’s Chris Williams took to social media to call out his former co-stars, who previously voiced their concern for Chris’ relationship with Paige Banks during their season.

Chris not only reposted the couple’s divorce record, Showbiz CheatSheet reports, but also wrote over the document in an Instagram Story, accusing the two of hating him (or, as he referred to himself, “a real upfront dude”) and falling in love “just because they fulfilled your fantasy of real love.”

Chris also criticized the “great advice” the two gave on the show, and insinuated that Erik, an airline pilot, has a drinking problem. 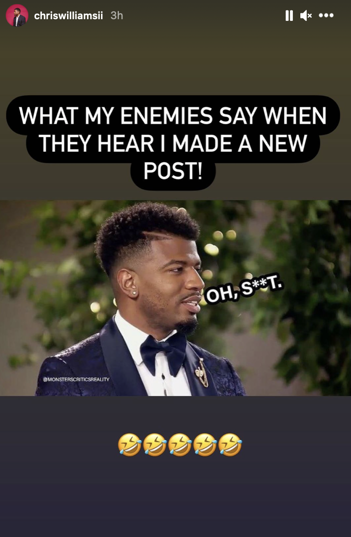 “Is that the smell of gasoline or alcohol?” he asked. “[Anytime] I get on the plane and I hear the captain’s voice I get nervous. They all sound like Erik. I be peeping in the front to see who flying us today I ain’t in that big of a rush I can take the next flight if he is flying us.”

Erik and Virginia have yet to respond publicly to Chris’ statements.

RELATED STORY: ‘Married at First Sight’ Heads to Houston for Season 13, Set to Premiere Next Month: Meet the New Couples